Joseph Kittinger, the Man Who Dove to Earth 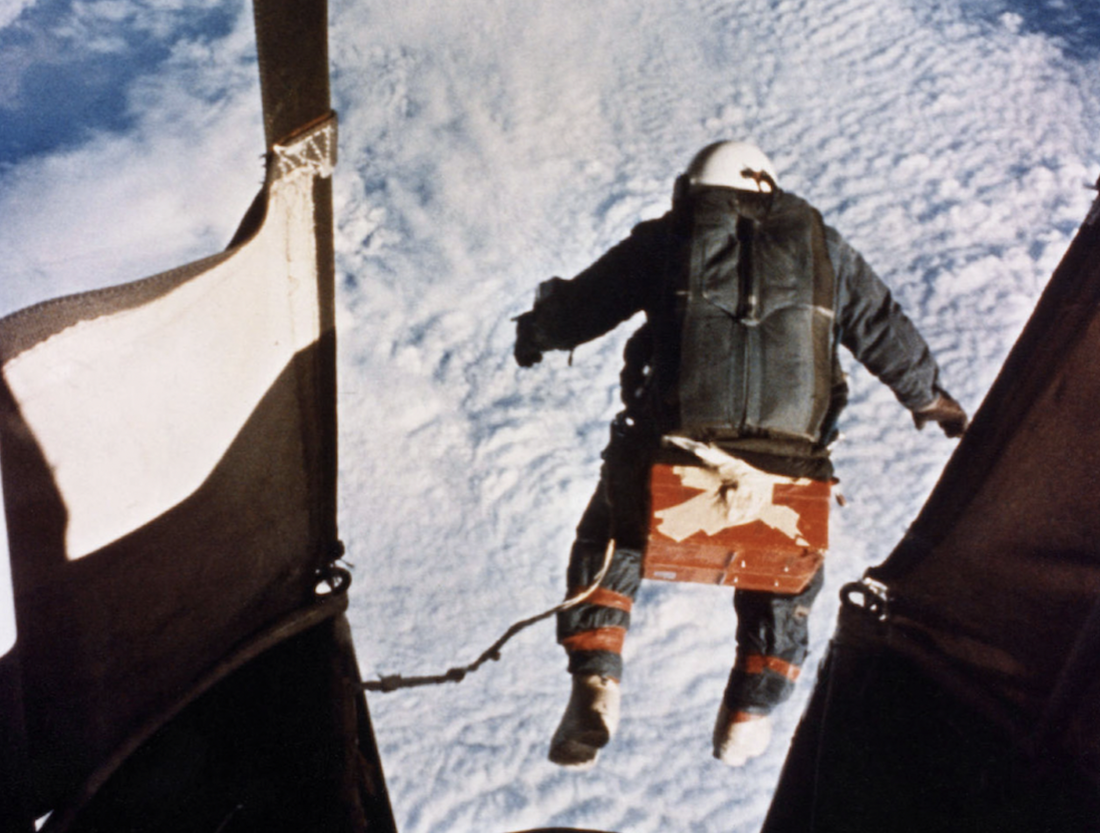 Joseph Kittinger, the Man Who Dove to Earth

First, the indescribable view. Earth, many miles below, twinkling blue, whorls of white and grey clouds. Home is down there somewhere, familiar faces too, but everything you find comfortable and safe is hidden beneath a blanket of impossible distance. No way to reach any of it but to jump. The silence of the stratosphere is stunning. Nothing but the sound of your own anxious breathing in a sealed helmet. Now, it’s time. Gather yourself, take a deep breath, a hard swallow to settle the void in the pit of your stomach, a last look down at the Earth below, a turn of your head to wonder at the impossibly bright stars, a brief moment to appreciate the beautiful absurdity of it all. Then you step into the void.

Joseph Kittinger’s job for the US Air Force in the late 1950s was making that leap. During his career he set records for highest balloon flight, longest free fall, and fastest speed achieved by a human being under their own power (well, under gravity’s too). Kittinger also had a decorated career as a fighter pilot, retiring as a Colonel and earning the Distinguished Flying Cross.

“I said, ‘Lord, take care of me now.’” Kittinger later recalled. “That was the most fervent prayer I ever said in my life.”

When his records for jumping out of the stratosphere were finally broken in 2012 by Austrian madman Felix Baumgartner, Kittinger was right in Baumgartner’s ear during his jump, literally, as the mission’s supervisor directing things over the radio. 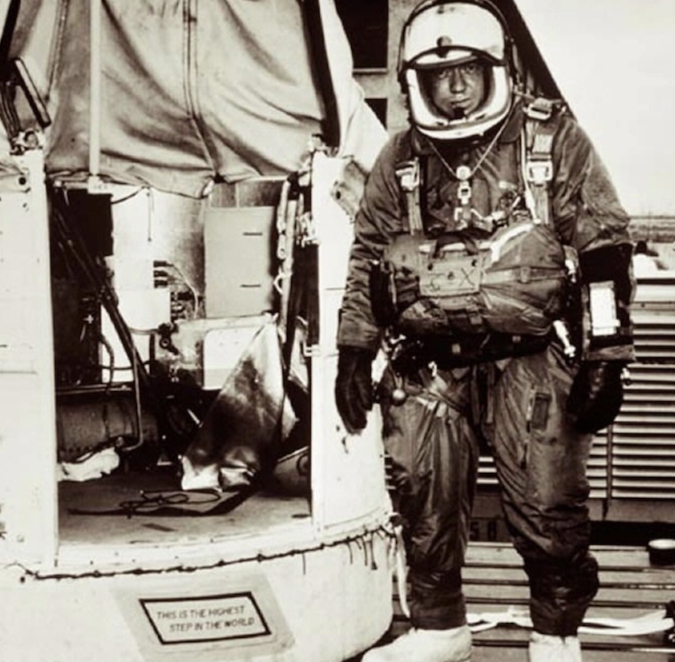 Joseph Kittinger next to the Excelsior gondola on June 2, 1957. Note the sign: “This is the highest step in the world.” Photo: US Air Force

Kittinger was the sort of person who has a flash of what they want their life to look like as a child, then seemingly without any second guessing or hesitation, realizes that dream. He was born in Tampa, Florida, in 1928. As a kid he saw a Ford Trimotor parked at a nearby airfield (the sorta plane Indiana Jones liked to jump from in films). It sparked a lifelong love of aviation, and was the first step on a ladder Kittinger eventually climbed 102,800 feet into the sky.

An Air Force pilot of experimental aircraft in the 1950s, Kittinger was recruited to take part in Operation Man High and Project Excelsior, a series of experiments that kicked off America’s nascent age of space exploration. The Air Force had no idea what the human body could tolerate when it came to acceleration, deceleration, exposure to the thin upper reaches of the atmosphere, or, crucially for Kittinger, what might happen to a pilot if they were forced out of an aircraft at the furthest fringes of the atmosphere.

Kittinger made 3 jumps over 10 months from 1959 to 1960. They went like this. He piloted helium-filled balloons to a predetermined altitude riding inside a pressurized gondola-like car. Once there, he’d jump from the gondola, free fall for a time, then a series of parachutes automatically opened. Kittinger’s first jump nearly killed him when he became tangled in the cords of his stabilizing chute immediately into his jump. He plunged nearly 66,000 feet until his primary chute opened at 10,000 feet. 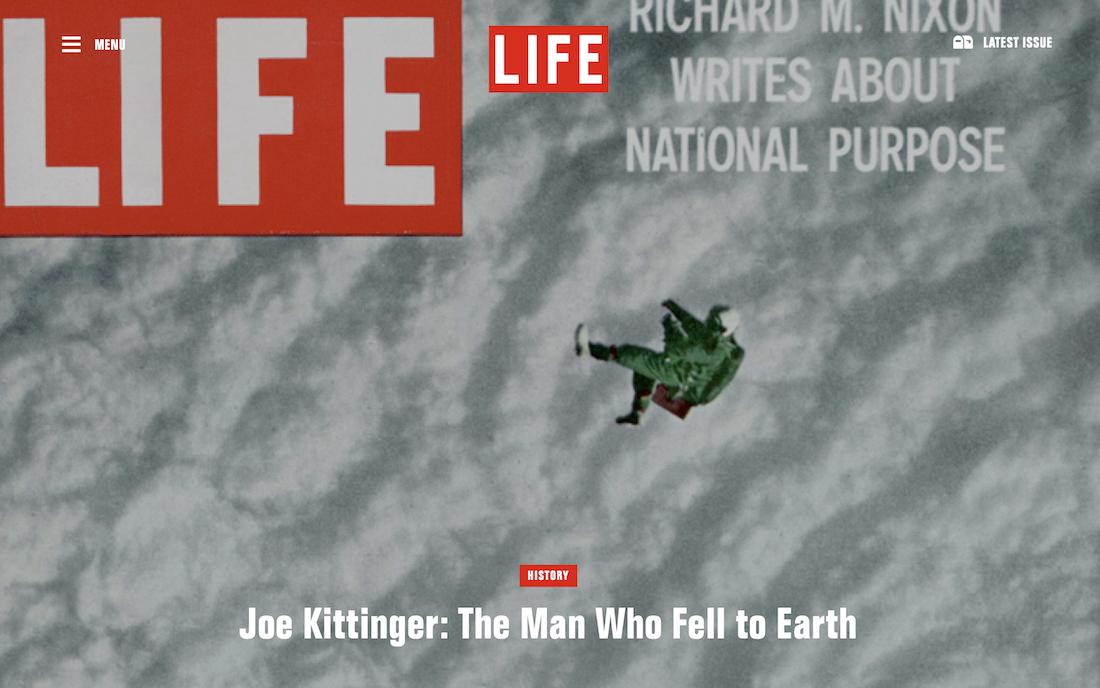 Undeterred, Kittinger jumped again a month later, before making his record-setting plunge in August, 1960. Aboard the balloon craft Excelsior III, he rose to 102,800 feet, an altitude record in itself. Kittinger’s right glove malfunctioned during the ascent, painfully swelling his hand to twice its normal size. He prepared his body and mind for the jump.

“I said, ‘Lord, take care of me now.’” Kittinger later recalled. “That was the most fervent prayer I ever said in my life.”

He free fell for 4 minutes, 36 seconds. At that altitude, Kittinger was effectively in space, a vacuum. He reached terminal velocity after 20 seconds of acceleration, hitting 614 miles per hour.

“There’s no way you can visualize the speed. There’s nothing you can see to see how fast you’re going. You have no depth perception. If you’re in a car driving down the road and you close your eyes, you have no idea what your speed is. It’s the same thing if you’re free falling from space. There are no signposts. You know you are going very fast, but you don’t feel it. You don’t have a 614-mph wind blowing on you. I could only hear myself breathing in the helmet.”

That would be enough for most people, in terms of high-flying excitement. But it was just the beginning for Kittinger.

“Everybody wants coconuts, but nobody has the guts to go up there and get them.”

After his final jump and another high-altitude balloon flight, Kittinger entered active combat duty in the skies above Vietnam. He served three tours, was credited with the kill of a MiG-21, and was shot down near Hanoi in 1972. For 11 months, Kittinger was a POW at the infamous Hanoi Hilton, fiercely observing military discipline to keep himself sane. He retired from the Air Force as a colonel in 1978.

Would you be surprised to learn Kittinger later became the first person to pilot a hot air balloon across the Atlantic? In 1984 he took off from Maine and drifted 3,543 miles over 3 days before alighting safely in Italy. 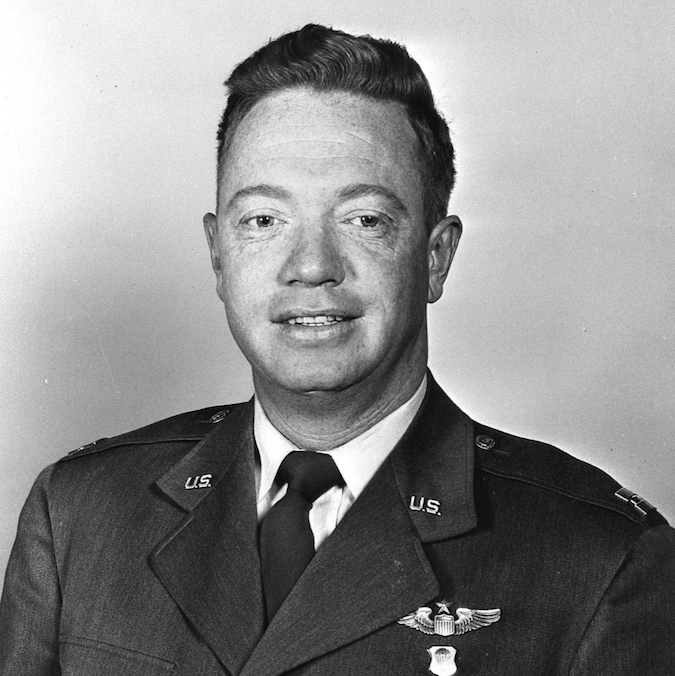 In his later years, he ran the Rosie O’Grady’s Flying Circus, in Orlando, Florida, taking people up in hot air balloon rides. Did his customers know the avuncular man at the controls had once leapt from a balloon at the fringes of space? Whether or not they did, they were in expert hands.

When Kittinger’s father watched his son at age 13 scale a 40-foot tree to pick coconuts, he was said to exclaim, “Everybody wants coconuts, but nobody has the guts to go up there and get them.”

Those guts earned Kittinger a Distinguished Flying Cross, high-altitude records that stood for 52 years, and the Smithsonian’s highest honor, the National Air and Space Museum Trophy. More importantly for Kittinger, who always pointed out his balloon trips as part of Operation Excelsior were not meant to break records, but to gather data, he experienced the kind of grand adventure only a handful of humans have ever known—charting a part of the Earth, or the envelope of it, nobody else had ever seen.