Anatomy of a Sandbag 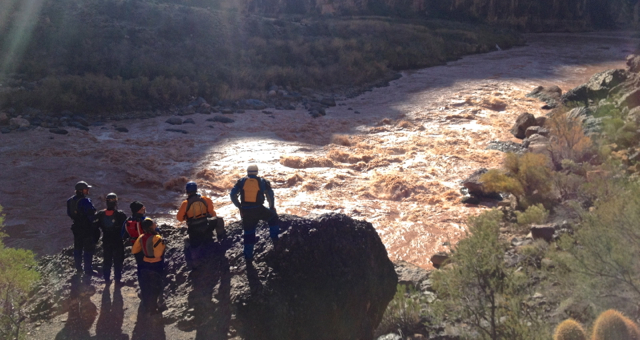 Anatomy of a Sandbag

We all have that friend who may need a little encouraging to do something they’re a little apprehensive about. Or something that flat-out scares them. Like leading a run-out pitch, or dropping into a couloir they haven’t skied before, or rowing a rapid with a reputation for flipping boats, or riding a technical trail famous for breaking bicycles and bones. And many times, we are that friend who needs the encouraging.

Stage 1: Doubt
Friend #1 believes their ability in a sport is not sufficient for a certain objective (example: riding the Portal Trail, leading the crux pitch of The Naked Edge, rowing Lava Falls). Friend #2 believes Friend #1’s ability is sufficient, and all that’s really missing is confidence.

Stage 2: The Sales Pitch
This is where Friend #2 tries to supply the appropriate confidence, with a number of tactics to convince Friend #1 that the impossible is possible. Friend #2 minimizes the danger or uncertainty, saying things like “Just relax,” “There’s a short technical section, but other than that it’s easy,” “You don’t need a #4 Camalot for this pitch,” “If you can follow it, you can lead it,” and many other phrases, usually including the Ultimate Sandbag Axiom, which is “You’ll Be Fine.” The key here is to push the sale, carefully, but firmly.

Stage 4: The Outcome
After Friend #1 decides to step into the void, march in the direction of their fear, or launch themselves into the often terrifying river of personal growth, a number of outcomes are possible, both positive and negative. Unscientific estimates put the success rate of sandbagging in the 75% realm, but are only anecdotal. In the case of sandbag failure, negative outcomes such as broken bones, broken bicycle components, swearing off climbing for the rest of one’s life, and embarrassing public breakups are possible. (It’s important to note here that sandbagging in romantic relationships is extremely risky and often disastrous, and should be attempted only with extreme caution, if at all.) On the positive side, personal limits are often shattered, climbing careers are begun, Facebook profile photos are captured, and astronomical leaps in personal growth can occur.

Sometimes, although not always, a friendship will survive a sandbag. The odds of this vary widely based on many factors, including the age of the friendship, the audaciousness of the sandbag, the respective emotional stability of the two friends involved, each person’s appreciation of the value of intense experiences, and the amount of physical and emotional damage incurred by the outcome of the sandbag. It’s important to weigh these factors to the best of your ability before you actually sandbag a close friend.