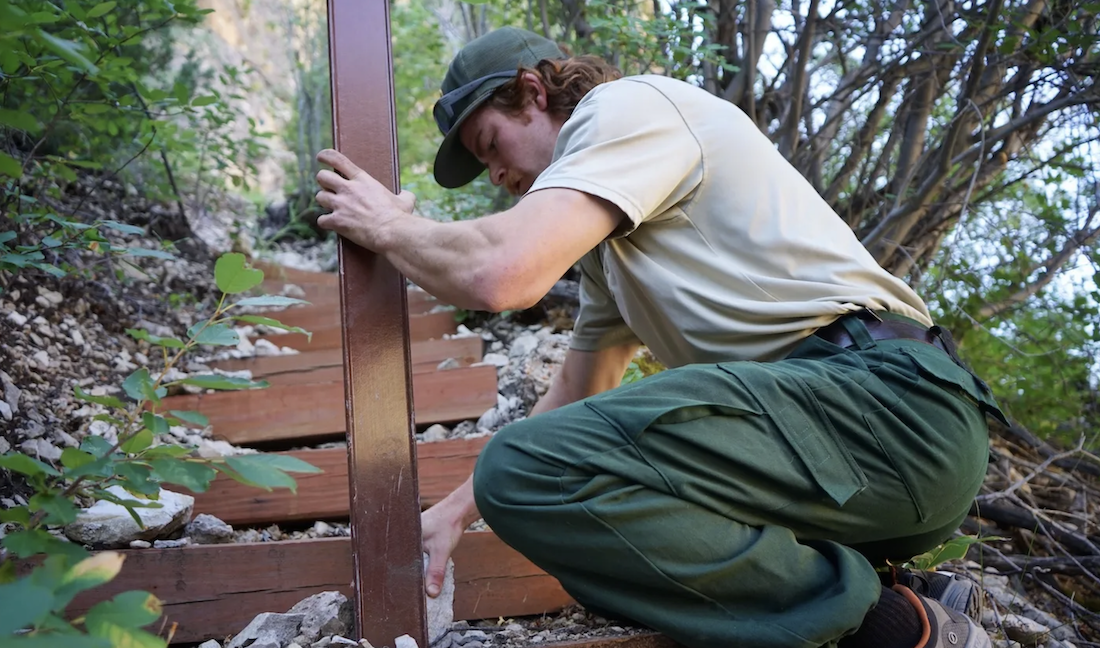 A flicker of disappointment crosses James Pfeifer’s face as he gazes at the path that cuts up this steep embankment. A skinny post that reads “CLOSED FOR RESTORATION” should be planted here, blocking access to the rock wall ahead. But there’s only a faint hole in the trail where the sign once stood.

Pfeifer and his colleague Bo Schwanke scan the thick brush around the trail and spot the sign — along with another just like it. They have been tossed down a steep incline into the vegetation, and Pfeifer scrambles down to retrieve them.

Back on the trail, Pfeifer pounds one sign back into the path where it was yanked.

Though the offense is minor, he said, it’s still discouraging because the sign was put up for safety concerns — it blocks off an area called Trump Tower that became a casualty of intra-climber conflict over responsible route development in Tensleep Canyon. Holds were drilled into and glued onto the wall — a widely condemned practice known as manufacturing — before an opposing group “chopped” several metal bolts, effectively cutting down routes. 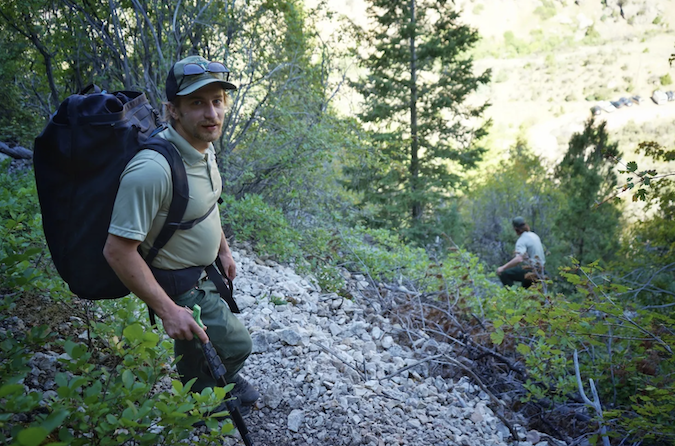 Tensleep Canyon Climbing Ranger Bowen “Bo” Schwanke stands on a trail as fellow ranger James Pfeifer retrieves closure signs that someone yanked up and tossed into the vegetation. (Katie Klingsporn/WyoFile)

Recovering vandalized signs is also the kind of task that keeps Pfeifer and Schwanke from inventorying the canyon and educating users on how to be good stewards, he said.

Meet the Bighorn National Forest’s climbing rangers. As the Forest Service grapples with regulating the sport and inches forward on a climbing management plan — a yearslong process some say could influence public-lands climbing management across the U.S. — the rangers patrol the roads, paths and roughly 1,200 rock routes in the canyon, as well as the forest’s other climbing areas.

Their green-uniformed presence, officials say, helps the agency police climbing activity as it wades into the relatively uncharted terrain of managing a sport that’s long been left to its own devices.

With its soaring dolomite walls and relatively easy access, Tensleep Canyon has become a mecca for sport climbing. Sport climbing is characterized by the use of permanent metal anchors bolted into the cliff face. Climbers attach carabiners to the anchors and thread ropes through the carabiners as they ascend, establishing points of contact from which to arrest a fall.

Beyond installing bolts and scrubbing off loose rocks or dirt, most climbers consider manipulation of the rock unethical. 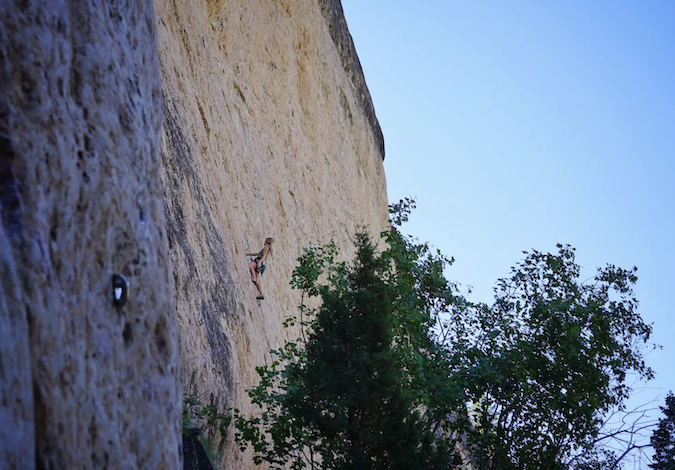 A climber ascends a route in the Powers Wall zone of Tensleep Canyon in July 2022. (Katie Klingsporn/WyoFile)

But as more climbers descended on the canyon in the 2010s, a conflict over ethical development of climbing routes began to simmer with the discovery that someone had been manufacturing routes using drills and glue to enhance or otherwise manipulate holds.

Once word got out that manufacturing was happening on a significant scale, climbers were outraged. The conflict boiled over with social media campaigns and under-the-cloak-of-night bolt chopping missions before the U.S. Forest Service intervened in July of 2019. That’s when the agency issued what amounted to a moratorium on the establishment of any new climbing routes or trails in the entire Bighorn National Forest.

That move was seen as a drastic step. Then-Powder River District Ranger Traci Weaver told WyoFile the agency did it in order to call a “timeout” on development in the canyon so the agency could work with groups to create a climbing management plan for the forest.

The agency didn’t have much of a roadmap, however, because such plans are rare. The U.S. Forest Service does not have national-level guidance on climbing, though access advocacy groups that have lobbied for it believe it’s forthcoming.

Nevertheless, the Powder-River District began to forge a plan, holding public meetings and releasing scoping documents in February 2021 that identified several issues in the 26,000-acre project area related to impacts of climbing and growing crowds.

They include dangerous highway and parking conditions, improper disposal of waste, erosion at the bases of cliffs, impacts on wildlife like nesting raptors, a proliferation of dispersed camping and damage to rock routes.

More than 500 comments were submitted on the scoping documents.

But when Weaver left the helm of the Powder-River District for a new position, the plan lost momentum. The Bighorn National Forest shelved it in fall of 2021. The 2019 development ban remains in place.

Thad Berrett, who took over for Weaver in January, intends to finish the management plan. But it likely won’t be on the original timeline, he said.

“We decided that we needed a better inventory of the routes that are out there before we move forward with our climbing management plan,” he said, along with trails, staging areas and parking areas.

Much of that work has fallen to the climbing rangers, whose positions were created as another tool to manage the canyon’s climbing conflicts. Pfeifer has patrolled since 2019. This is Schwanke’s second season.

Pfeifer is the mustached and more talkative of the two, Schwanke quiet and slight.

Their newest task of inventorying the canyon further validates the positions — the in-person data logging is painstaking. But even without data collection, Berrett said, the climbing rangers have improved the atmosphere.

“Most people are respecting the, ‘hey, we’re not supposed to be developing routes out there,’” he said. “I think we would have had a lot more routes in there in the last three years if we wouldn’t have had our climbing rangers out there with that education piece.”

After replacing the trail closure sign, the rangers continue hiking. They traverse an exposed rock outcropping using metal rungs and climb a vertical notch to arrive at the closed wall.

Dark smudges of glue and remnants of chopped bolt stems offer evidence of the resource damage that prompted authorities to close it.

“We kind of saw a real abuse of the resource in Tensleep Canyon. That was a huge problem,” Pfeifer said. “The rock [was] essentially being used as a battleground.”

This area, which has overhanging, friable — and thus less desirable — rock, is one of the most manufactured places in the canyon, Schwanke said.

“That’s kind of our goal is to kind of keep people from using these heavily manufactured areas because it doesn’t align with what we’re trying to accomplish,” Pfeifer said. 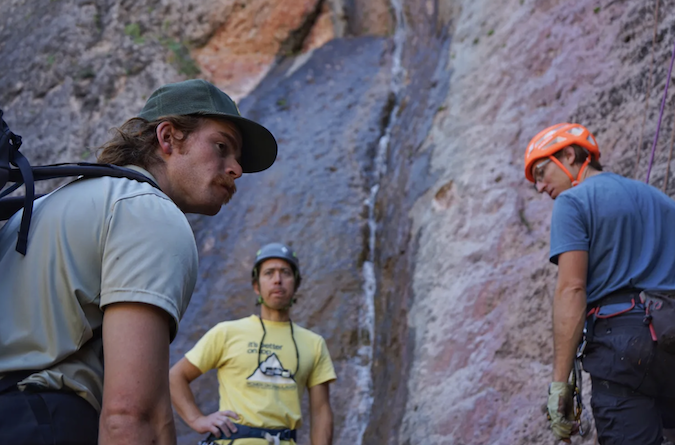 The two men live in seasonal USFS housing high in the Bighorn Mountains. They start a typical day by driving down the ess curves of Highway 16 into the precipitous canyon. They park, note traffic, then hike one of the canyon’s many user-created access trails (which are steep and susceptible to erosion — another issue the scoping documents identified). Once at a rock wall, they log route data and GPS coordinates into an iPad, and note pertinent details such as the existence of sensitive plants or manufacturing.

They chat with climbers they happen across, answering questions, dispensing leave-no-trace tips or offering climbing intel. The two men — both climbers who have spent much of their careers outdoors — often rope up and climb themselves. Someone has to “field verify” the routes, after all.

On this Friday in late July, a half-dozen climbing groups have hiked to the shaded climbs in an area known as Powers Wall, where they take turns scaling the walls unhurriedly. After the busy weeks around a recent climbing festival, it’s fairly quiet.

A group from Colorado is climbing a scenic line that parallels a slender waterfall. Most of the Colorado climbers have never been to the canyon, and say it was well worth the drive.

“The terrain is beautiful, there’s tons of climbing,” said Alison Proffit. “I like the variety of the routes.”

That beauty — and the fact that it’s a sport climbing destination with easy access — can also tend to draw newer climbers who don’t have a ton of experience on natural rock, Pfeifer said, or knowledge about stewardship and etiquette. Many don’t know what manufacturing is, let alone how to identify it.

The rangers try to fill in the gaps, and see education as their biggest tool.

Occasionally the rangers exercise their authority. Today, Pfeifer admonishes an ATV driver to slow down on a dirt road. He tells some young climbers to mind their music volume. Sometimes it rises to a more serious level; Pfeifer has issued citations for illegal route development. Despite his efforts, development has continued in defiance of the ban.

He spots signs of manufacturing everywhere, and believes individuals are attempting to re-establish and even re-manufacture closed climbs. At the Powers Wall, he uses a climbing tool to point out multiple spots where glue has darkened the rock, and pokes a finger in holds to determine they have been smoothed away by drills.

As a climber himself, Pfeifer is dismayed that others have manipulated the rock in Tensleep Canyon to this extent.

“Manufacturing is not OK,” he said. “There’s just too much abuse to the resource. And it kind of removes the ability for future generations to kind of push the grades and push to the next level of climbing.

“We’re trying to establish a precedent and an ethic here that allows for continued route development but does not allow for manufacturing.”

That sums up the hope of the Bighorn Climbers Coalition, president Brad Burns said. The group, which does climbing outreach and work throughout the Bighorns, has been involved in every step of the management plan.

Being able to continue developing climbing is important, Burns said, but his group wants to ensure it’s done ethically, safely and sustainably.

In the past year, the BCC released a document outlining development best practices. The document is unequivocal. “We can, and should all agree that an ethical form of development is one that does not include any sort of ‘manufacturing’ of holds,” it reads.

Route development has historically been conducted on a trust system by climbers, Burns said. While “climbers have done a pretty decent job,” Burns said, “it’s high time that somebody addresses it” in a more formal way.

“Really what needs to happen, and what’s inevitable to happen is that there is going to be some sort of land-manager influence on climbing in the future,” Burns said. “And so I want that to be managed well, and I want it to have some sort of actual teeth to prevent things like this from happening in the future.”

And because so many places in the U.S. are grappling with growing pains related to climbing’s popularity, it’s important to get this plan right, he said. It could be looked to as an example.

The sport has grown faster than many land managers have been able to respond to, said Erik Murdock, a policy director for the national nonprofit Access Fund, which has also been engaged in the climbing plan process.

Though the Access Fund supported the 2019 development ban, he said, it was meant to be a temporary stop-gap. “So we’re really disappointed that this process is taking so long,” and that the “order still stands.”

District Ranger Berrett didn’t have a specific timeline for the plan’s completion, but acknowledged its need.

“Absolutely, anytime we have unrestricted use going on without guidance, you end up needing some type of management plan,” he said. “I think we’re stepping up and gonna get that done here soon.”

Meantime, the rangers will be manning the walls and paths of Tensleep Canyon and the greater BNF.

There was initial skepticism about the rangers from the climbing community, Burns said. Climbers were worried the rangers posed a threat to climbing access, he said.

“But I think now people are a little more cognizant of the idea that the climbing rangers are there to protect the climbing, and they’re also members of the community,” he said.

This story was originally published by WyoFile and appears here with permission.