A Family Works Together to Fill the Freezer for Another Year 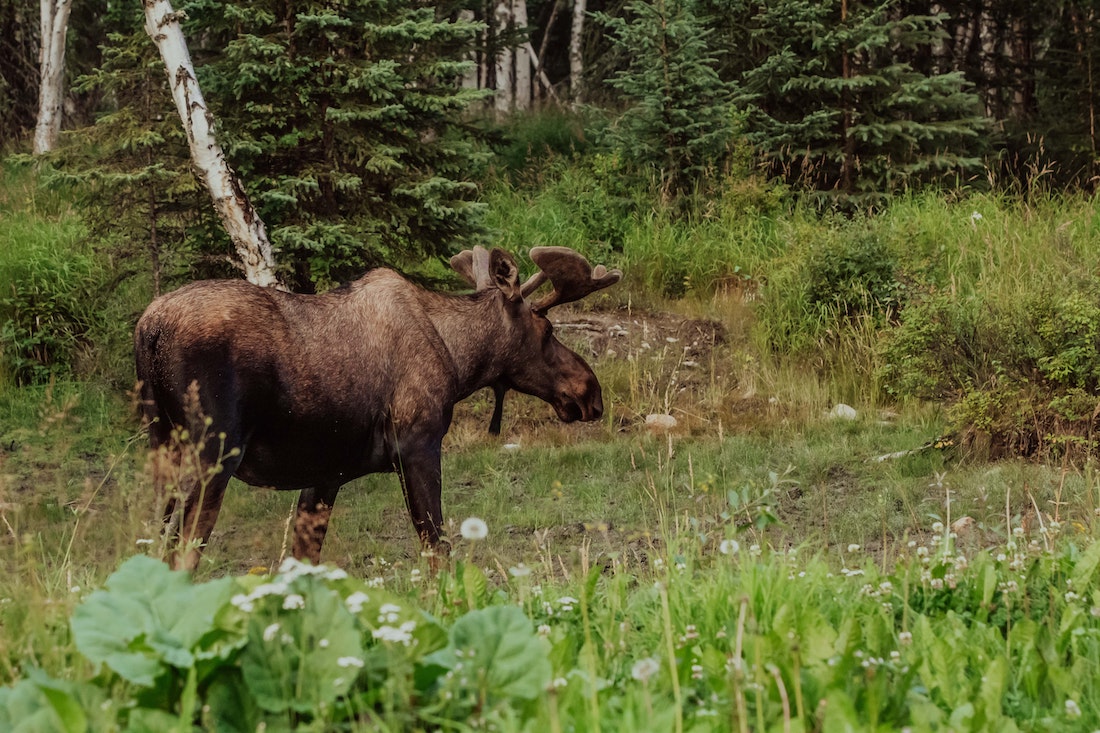 A Family Works Together to Fill the Freezer for Another Year

saw the antlers first. And then the big brown body. It took a few seconds for my brain to register that a moose really was standing there, in a clearing in front of some spruce trees — still and completely broadside, like a painting.

I elbowed my husband, Timm, who stood next to me, driving our river boat, and pointed. “Up there, look,” I said.

We had set off just moments before, having packed the boat with enough food and clothes to spend all day hunting up North River, a tributary that branches north from the Unalakleet. Wearing down jackets, insulated Carhartts, fall-time muck boots and fur hats, we had expected a long and chilly boat ride. But minutes into the trip, we spotted the antlered moose.

For weeks that fall, we had been boating upriver or taking four-wheeler rides looking for moose, but each day we came home with less food than we left the house with. No meat. No bones. No fresh tongue and heart for the next day’s soup. We still had some meat from the moose Timm had harvested the year before, but it wasn’t enough to last another winter. Finding this moose was like gaining possession of the basketball with 15 seconds left in the game when your team is one point down: excitement, matched by the hope that you don’t screw things up.

Timm and I had made a plan for a situation like this a few days before, and now we enacted it: We swapped places, me taking the steering wheel while he grabbed the gun. I slowly drove the boat toward the high bank where the moose stood. A stand of willows at the edge of the grassy tundra hid our approach. It felt lucky, but I knew anything could happen.

When the boat kissed the hard mud at the base of the bank, Timm jumped out with his rifle. I turned the motor off.

“I want to go. Please,” Henning, our then 3-year-old son, said as I crept across the deck to sit next to him.

“Quiet, Henning. We need to be quiet,” I said, sitting down to hold him.

The moose was just a short distance from the river, but the bank was too high for us to see over it. I knew Timm should get a good shot, but I wasn’t yet confident in his aim. We hadn’t felled a moose before, just the two of us.

Waiting, I heard myself breathe. Felt my chest rising and falling. I felt Henning breathe next to me. We sat still, listening.

We heard a shot. I squeezed Henning.

A short moment later we heard another shot. Oh no, I thought. It’s running.

On the grassy tundra above us, Timm strode into view. I was prepared for bad news. He looked at us with wide eyes. Then he gave us a thumbs-up.

I moved Henning from my lap and, now making as much noise as I wanted, moved the anchor, and secured the line so I could tie it to a willow on the bank.

“It didn’t move at all,” Timm said. “I shot it and it walked a short way. I shot it again and it dropped.”

We filled a red plastic sled with our grub box, a few tarps, and the butchering gear and walked toward the spruce trees, Henning following.

“Thank you, moose,” Henning said as we neared the large brown animal. “Thank you for not running away.”

“Thank you, moose. Thank you for not running away.”

Unalakleet is located on a sandspit at the mouth of the Unalakleet River. Upriver, the valley is bookended by the Whaleback Mountains, a sight that softens my belly. For most of us who live in Unalakleet, home isn’t just the area where town is located. It’s the entire river valley, the coast that runs north and south, the Nulato Hills that spread as far as you can see. It’s the entire area where we travel, harvest, play and share.

As we butchered the moose that day, the trees stood tall east of the small, wet, grassy clearing where the animal lay, with the river just there, always that friend. It was one of those hot fall days that forced us to strip down to our thin wool bottom layers as we cut and pulled, cut and pulled, moving together to transform the moose into packable sections. At one point, as I held a heavy rear quarter, the smell of muck rose up from underneath my boots, reminding me to keep my balance. I gripped the leg with my hands and my arms, my fingers clutching the coarse, thick brown hair, using my body more than I had in a year.

“Almost done over here,” Timm said as he skinned the underside.

We heard a boat approaching from downriver and looked up to see the red stripe on my dad’s ocean and river skiff, the boat that can do it all. I realized how sunny it was; just a few clouds in the sky without a mosquito in sight. The moose leg in my arms felt lighter.

I smiled when I saw my daughter, Sidney, in the boat along with a couple other young and able helpers, two of my nephews. They parked. Dad walked up, still moving well across the soft, mucky ground for someone nearing 75 years old. With more energy than the 20-somethings who came with him, he pulled out his sharp skinning knife and immediately got to work.

“My mon, you got a moose!” he said to Henning, who goes with us everywhere. He teased Timm about his dull knife. Watching him, every cell in my body danced.

Dad, Timm, my nephews and I all worked to cut the quarters off the moose, taking turns holding sections while others sliced. Sidney played with Henning and fed him snacks of salmon spread and crackers, chocolate and tea.

The breeze seemed to share whispers with the grass. The sun warmed our skin, a balm as our muscles grew tired. And in hearing the murmuring of the men talking about their next cuts, hearing Henning’s high voice tell Sidney he was thirsty, I felt it.

The smooth. The sparkly.

The ease of life was there, with all of us working together.

Laureli Ivanoff is an Inupiaq writer and journalist based in Uŋalaqłiq (Unalakleet), on the west coast of what’s now called Alaska. Her column “The Seasons of Uŋalaqłiq” explores the seasonality of living in direct relationship with the land, water, plants and animals in and around Uŋalaqłiq. This piece was first published at High Country News and appears here with permission. Top photo: Danika Perkinson/Unsplash