Book Excerpt: Between an Avalanche and a Hard Place 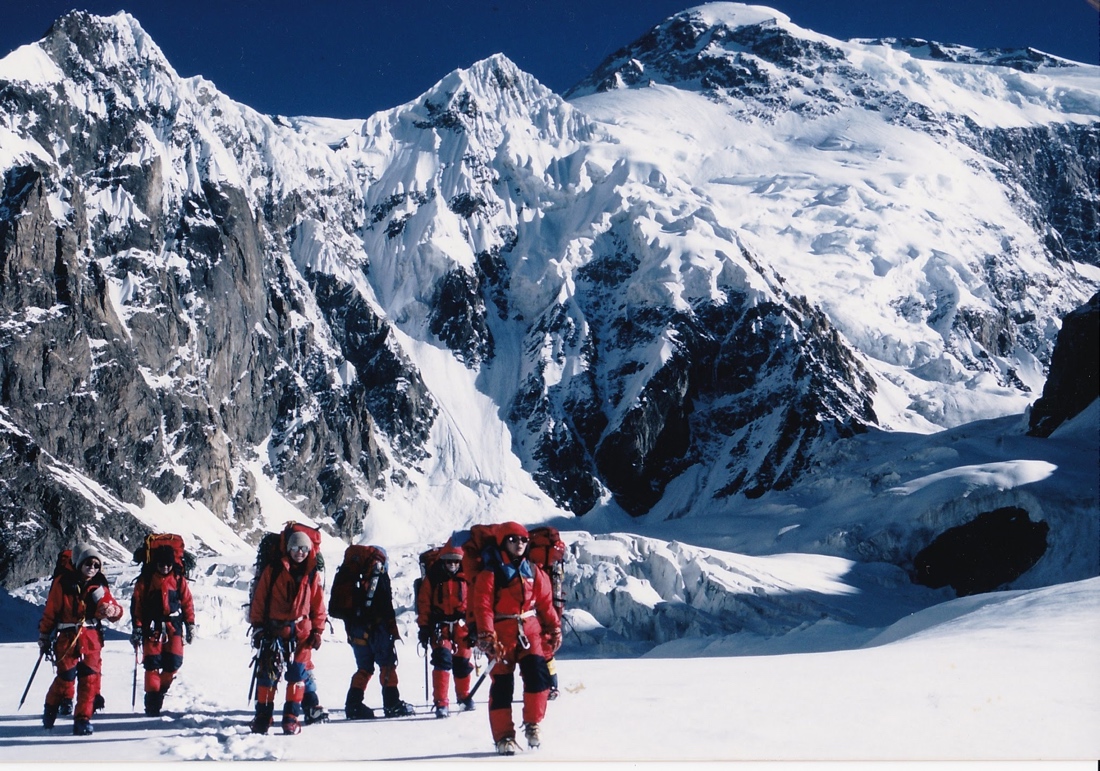 Book Excerpt: Between an Avalanche and a Hard Place

Back in Adventure Journal 07 we recommended the book Honouring High Places: The Mountain Life of Junko Tabei. It’s a collection of stories written by Tabei (co-written by translator Helen Rolfe), the first woman to summit Mt. Everest and to climb all Seven Summits, among a bushel of other mountaineering feats. Tabei was a hero in Japan, an inspiration to climbers everywhere, a world-class alpinist, and a talented writer. We also featured her in our Historical Badass column.

Honouring High Places won the 2018 Banff Mountain Award for Mountaineering History.  Below is an excerpt. In this section Tabei and her fellow climbers must decide whether to climb down or ascend further amid dangerous avalanche conditions on the slopes of Mt. Tomur astride the Kyrgyzstan–China border.

It was 1986. We were an all-women’s team of 12, granted a permit from the Chinese-Mountaineering Association for the first foreign-party ascent of Mount Tomur. We had also applied for a permit for the Soviet Union side of the mountain but were rejected; foreign expeditions were not yet being accepted there. Available information on the climb was slim, and all we had to rely on were reports from a 1960s Chinese expedition.

Greatly admired by climbers, the Tien Shan Mountains are a mountain range of dreams. To finally set foot there was almost unreal, but the environment posed challenges. Even reaching Base Camp was not straightforward. We used packhorses to carry loads of gear and food, hiked through areas with no trails or signage, relied on locals as guides, and had to endure endless meetings with the liaison officer assigned to us by the Chinese Mountaineering Association. At first, we were hopeful since the liaison officer was said to have been a member on the earlier Chinese expedition, but his memory was rusty and details were vague. We were on our own in this regard. 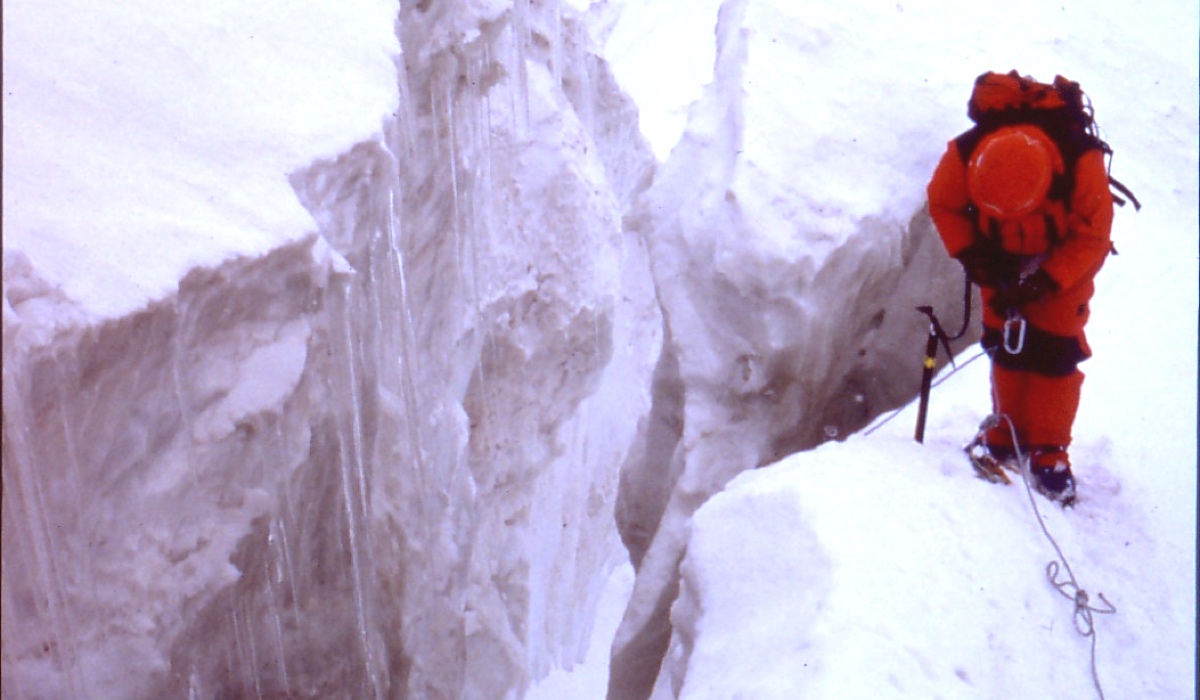 A maze of crevasses had us carefully navigate the glacier from Base Camp to Camp 1. A series of seracs were added to the puzzle en route to Camp 2, often forcing us to climb ice walls rather than contour around them. We were behind schedule and began to push things a bit, which meant that when the four of us left to establish a third camp below Battleship Rock, we had not allowed ourselves enough time to acclimatize. The result: we were down two climbers with Yuko suffering from altitude sickness and being accompanied by Kimura, while Yasuhara and I drove on.

We took turns breaking trail up the slope. Incredibly, Kimura caught up to us, yet Battleship Rock appeared no closer. Finally, as darkness began to settle, we arrived within an acceptable distance of the rock face. I checked my watch – 6 p.m. We dug a platform into the steep slope and pitched the tent. After brewing a hot soup, I stepped outside. There was heavy snowfall and the temperature was warm. I had a bad feeling about the combination of these factors. As we slipped into our down bags, we convinced ourselves to sleep that night regardless, and in the early morning we would re-evaluate the snow conditions.

In our cavelike hole, the tent was protected from the falling snow, but I could not put to rest the looming sense of danger I felt. My heart stirred in nonstop discontent. In the wee hours the next day, Kimura was the first out of the tent to gauge the situation. “Lots of fresh snow,” she said, “about 70 centimeters.” My heart sank further as I pictured that much new snow on such a steep slope. Avalanche. We were sitting ducks.

Stay there or move? We had to decide, so I stepped outside, too, for a better look. The steep drop of the slope beneath us was accentuated by the dark crevasses we could see lower down. If we moved, we would likely trigger the mountainside to release. First, I had to warn the members at Camp 2 and have them descend to Camp 1. Then we would climb higher once we knew everyone else was in a safe zone. This was the only reasonable solution I could formulate. Kimura and Yasuhara agreed. It was more dangerous for us to head downward than cover the final distance to Battleship Rock. A light snow continued to fall. The clouds hung low and visibility was poor.

As soon as we received a radio call to confirm that Camp 2 was vacated and our teammates were safe, we started to climb. I was in the lead. Heavy packs, a steep slope and new snow dictated a grueling pace. We were at an elevation of more than 6,000 meters, and I was breathing hard. I felt rushed. Ultimately, I reached the bottom of the rocky prow and hammered a 60-centimeter snow picket into the slope. “Climb up!” I yelled once I was secured to the anchor. Kimura was next on the rope, and then Yasuhara – they would climb in unison as I pulled up slack in the line. I was braced on top of an overhang and was unable to see their movement, but as the rope fed through my mitted hands I knew they were on their way. Soon I saw the top of Kimura’s helmet and was relieved that she only had 5 meter left to climb. Then, a split second later, she disappeared.

To learn the Kimura’s fate and read the rest of Tabei’s story, pick up Honouring High Places: The Mountain Life of Junko Tabei.

Want to dip more than just a toe into the mountaineering book world? Check out these selections too:

Art of Freedom: The Life and Climbs of Voytek Kurtyka by Bernadette McDonald (2017). A biography of a legendary Polish climber.

Everest: The West Ridge by Tom Hornbein (1964). A stunning story of the first successful ascent of Everest’s West Ridge.

The Calling: A Life Rocked by Mountains by Barry Blanchard (2014). Blanchard is one of Canada’s finest alpinists and this collection of his memoirs is a treasure chest of great stories on mostly unknown peaks.