An Ode to the Pulaski, the Hero’s Tool 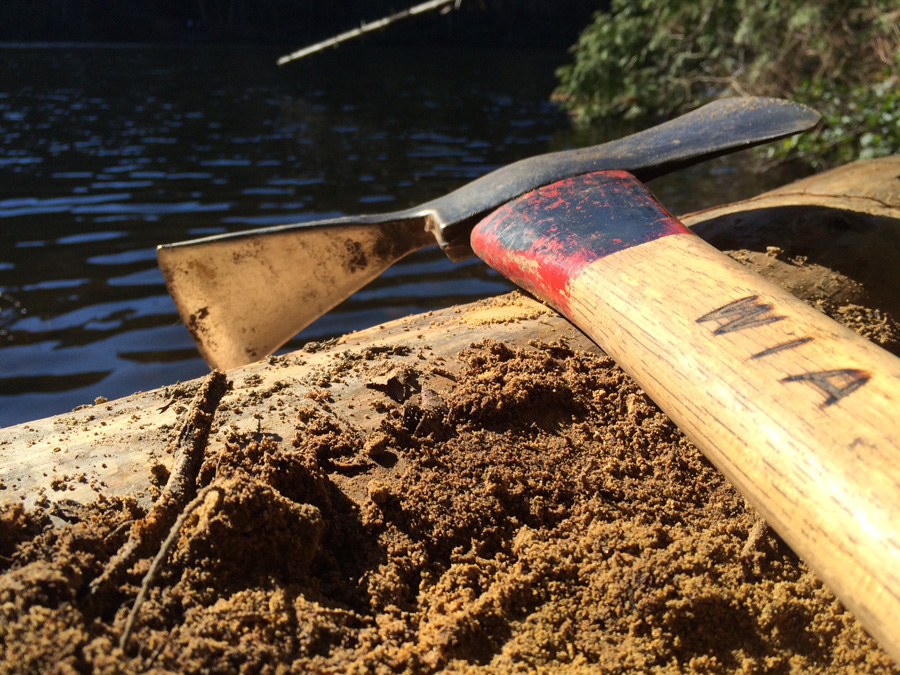 An Ode to the Pulaski, the Hero’s Tool

The Pulaski is not an elegant object—half axe, half mattock—it chops and cleaves, it excavates and grubs. It is, above all, a workhorse, just like the man who created it.

You may have never hefted one, but odds are you’ve ridden or hiked a trail that was shaped by a Pulaski or walked beneath trees protected by it. That’s because the Pulaski is the first tool trailbuilders reach for when constructing new trail and the one tool you’ll always see firefighters carry into a wilderness inferno. It’s been that way for more than a hundred years now.

They called him “Big Ed” Pulaski and when he was hired by the fledgling Forest Service in 1908 as an assistant ranger the 40-year old woodsman had already spent the previous 25 years rambling the West as a miner, ranch hand, railroad worker, and part-time blacksmith. In the summer of 1910 Pulaski was overseeing a group of firefighters near Wallace, Idaho. They had their hands full. It was bone-dry that summer—it hadn’t rained since May—and firefighters across the West were battling thousands of small fires.

But on August 20, everything suddenly went to hell. On that day, a rare hurricane-force windstorm, known as a “Palouser,” united scores of smaller fires into a conflagration that within just two days devoured three million acres of forest; an area about the size of Connecticut. The inferno completely consumed entire towns and left 86 people dead. 78 of them were largely untrained firefighters who battled the blaze with nothing more than shovels, axes, and buckets of water.

They didn’t have a chance.

Today that particular fire is known as “The Big Blow Up” and “The Big Burn.” Many experts believe we haven’t seen a more devastating wildfire since. Even with today’s advanced tools and training, many firefighters today would have been forced to cut and run.

That was exactly what Pulaski and 46 of his men were doing until they realized they were surrounded.

Remembering an abandoned mine from his prospecting days, Pulaski led his men inside the mine and ordered them to lay down on their stomachs on the mud. Throughout the night, the fire raged outside. It was so hot inside the tunnel that the support timbers caught fire, sucking oxygen from the air and creating conditions so hot that some of the men’s clothes burned off. Panicked, some of the men tried to run out of the tunnel, but Pulaski, knowing it was certain death outside, pulled out a revolver and kept his men safe, albeit at gunpoint. Throughout the night Pulaski kept the heat at bay by dousing the mineshaft timbers with hatfuls of water he collected from a seep inside the tunnel.

The next day, Pulaski and his men staggered back to Wallace. 40 of them had survived, though they were all in bad shape. Pulaski himself spent the next two months in the hospital. He would never be the same. The severe heat and smoke blinded him in one eye and decimated his lungs. Pulaski, however, stayed on the job another ten years.

One of the first things he did after the blaze was build a better tool.

If Pulaski had learned one thing from The Big Burn, it was that you needed to be fast on your feet. Dragging armfuls of tools around was not only impractical when fighting fires; if it slowed you down, it might also kill you. Working in his backyard forge, Pulaski combined two of the most important tools the axe and the mattock, into a kind of lightweight hoe.

When Pulaski presented his invention to his superiors in the Forest Service, they were initially unimpressed. The tool is an ungainly-looking mutt. What Pulaski’s creation lacks in finesse, however, it more than makes up for in sheer utility. The hybrid axe-hoe has an excellent balance to it, you can swing it all day and, with the flick of your wrist, you can go from chopping through roots to digging trenches. Firefighters in the field immediately took to it and by 1920 the Forest Service was issuing thousands of Pulaskis to their crews.

Edward Pulaski and his tool have become iconic symbols of sacrifice and hard work. Unfortunately, Pulaski died an impoverished and physically beaten man. Pulaski never fully recovered his health following The Big Burn and the Forest Service refused to pay for his and other firefighters’ medical bills. Furthermore, Pulaski was unable to patent his tool within two years of forging it (he was denied a patent in 1914); thus, while his tool entered widespread circulation within his lifetime, Pulaski himself never earned a cent from it.

Firefighters aren’t the only fans of the tool that bears its creator’s name. Today, trail builders the world over consider Pulaskis invaluable when it comes to laying the foundation for any trail. I’ve built singletrack in Colorado, North Carolina, Upstate New York, and the redwood forests of Northern California, and while the Pulaski isn’t the only tool I drag to the trailhead, it is the only one I consider absolutely indispensable. If you’ve mountain biked, gone trail running, or hiked a lonely bit of singletrack anywhere in North America, rest assured, you’ve traveled trail touched by the hero’s tool.

For more on the Big Burn and how it shaped the West, check out Timothy Egan’s The Big Burn: Teddy Roosevelt and the Fire that Saved America