Rell Sunn, Surfing’s Graceful Queen, Was as Tough They Come 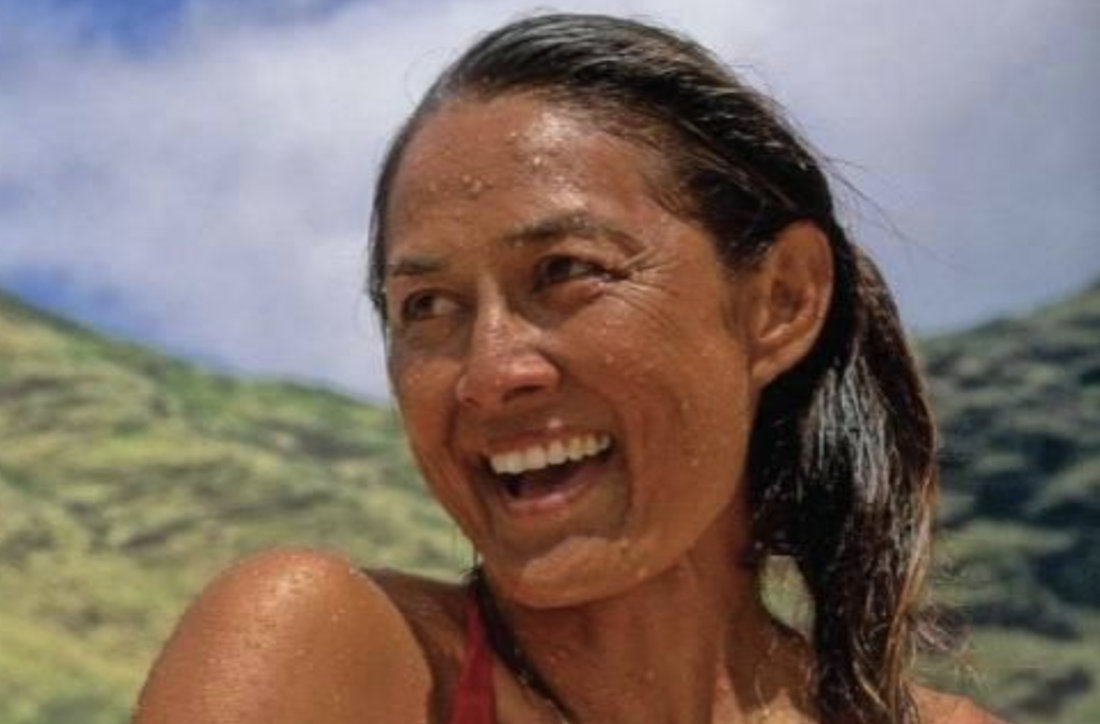 Rell Sunn, Surfing’s Graceful Queen, Was as Tough They Come

Few people ever touch their particular corner of the world, culturally, geographically, or spiritually, like Hawaii’s Rell Sunn. She was, still is really, the undisputed queen of Hawaiian surfing. Sunn shined in testosterone-heavy Hawaiian breaks, paddled out into fearsome surf surrounded by fearsome characters, with a smile and a flower tucked behind her ear. She inspired decades of Hawaiian girls to surf bigger waves, to grow more in touch with the sea. She fought to bring a measure of equality to surfing, both in the water and in the early professional days of surfing as a sport. She survived and even thrived with breast cancer for 15 years, continuing to surf at a high level while inspiring joy and stoke throughout the surf world, even as her health faded. If you were to carve surfing’s version of Mt. Rushmore into a mountaintop somewhere in Oahu, you’d begin by chiseling two faces into the rock: the great Duke Kahanamoku, who spread surfing from Hawaii to the entire world, and Rell Sunn, the human embodiment of aloha and one of history’s greatest all-around waterwomen.

Sunn was born in 1950 in Makaha, a relatively arid, hardscrabble beach town on the west side of Oahu, home to several world-class waves, but an area deep in the shadow of Oahu’s famed North Shore, surfing’s crown jewel. She was the daughter of a “beachboy,” a kind of professional lifeguard/surf instructor/tourist hustler. Sunn and her four siblings lived in a Quonset hut, raised at least as much by the sand and surf as by their father. Her middle name, ‘Kapolioka’ehukai,’ can be translated into Hawaiian as “Heart of the Sea,” a name she certainly lived up to.

“Rell embodied everything that is great about surfing, but she grew larger than that. She represented the most basic values we hold so dear in Hawaii.”

By age four, she’d learned to surf on her family’s single battered surfboard, which she quickly made her own. Until she won a surfboard in a later contest, it was the only board she’d ever ridden, a massive departure from the modern surf world in which promising youngsters go through several boards each year. Sunn also spent much of her time learning to freedive and exploring the reefs surrounding Makaha.

One of the world’s great big waves breaks at Makaha Point. In the mid-1950s, Sunn watched surf world heroes descend on her hometown to challenge Makaha’s big winter surf in an annual championship contest; at the time, Makaha was considered to be the largest-breaking rideable wave in Hawaii, perhaps the world. Sunn grew to learn from surf legends like Kahanamoku and fellow Makaha locals Rabbit Kekai and Buffalo Kealuana, as well as respected haole surfers like George Downing and Buzzy Trent, who were drawn to the powerful surf at Makaha.

“People from all over the world came out to Makaha. There were these men, telling these great stories, and I swore then that women could tell these same wonderful stories,” Sunn later said in an interview.

As a teenager, Sunn showed no fear in the huge waves battering the Makaha reefs. She later explained that her courage was rooted in her beliefs about aumakua—protective spirits—keeping her free from harm. At 16 after turning heads in big surf, she was invited to the 1966 World Championships held in San Diego.

Just two years later, however, Sunn moved with her boyfriend to Oklahoma, of all places, eager to see something besides Hawaii. They married and had a child, but by 1972, Sunn was on a plane back to Hawaii, daughter in tow, the marriage failed, but with the sea calling.

Though she hadn’t surfed in half a decade, and while surfing was in the midst of a performance revolution that saw dramatically smaller and more maneuverable surfboards than Sunn had ever surfed before, she took up right where she left off, surfing as good as some of the best male surfers in Hawaii, with an unmatched poise and grace. By 1976, she’d joined a fledgling women’s world tour, and immediately began agitating for equal respect, if not payment, for professional women surfers. In 1979, she’d helped form the Women’s Professional Surfing organization, devoted to increasing women’s participation in, and their cut of the profits from, the burgeoning surf industry, but without having to flaunt their nearly naked bodied to do it.

Sunn also became a lifeguard in Makaha in 1975—Hawaii’s first female to hold that revered position in a culture that so values ocean competence.

All the while as she competed as a top-level pro surfer, Sunn kept up her diving and her intimate connection with the sea. As good a surfer as Sunn was, she was an equally respected open ocean swimmer, paddler, and spear angler.

“Some of the guys would hit a fish and their spear would go over the side of the ledge, deep to the point where guys can’t dive,” said Brian Keaulana, a Makaha surf legend. “And everybody would look at Rell and [ask] ‘Rell, can you get my spear?’ And she would dive down, grab the spear and bring them up with the fish on top.”

In 1982, at only 32 years old, while ranked #1 on the women’s surf tour, Sunn discovered a lump in her breast while surfing at a contest in California. She was soon diagnosed with advanced-stage breast cancer and told by doctors to expect to live only a year, as the cancer had already begun spreading through her body. Difficult to believe, as she was incredibly fit, full of life, and practically pulsating with vibrant energy.

That energy propelled Sunn to a remarkable second act in life. For the next 15 years, she continued to live as she had before, surfing every day, diving, swimming and paddling across open water, and spearfishing, despite terrible pain from the disease and continued treatments. She dealt with endless bouts of chemotherapy, radiation treatments, and a bone marrow transplant. Drawing power and purpose from the sea, however, Sunn surfed happily on, often with no outward symptoms of bad health for years at a time. She also had a powerful stubborn streak, and indomitable toughness—she was a black belt in Judo—that helped propel her through a brick wall of bad odds and a terrifying prognosis.

Through the 1980s, Sunn continued to compete in occasional surf contests and even began her own, the Rell Sunn Menehune Surf Contest, an important event in the Hawaiian surf scene and a point of pride in Makaha, a town with a high dropout rate among students and that struggles with drug problems (the contest continues into its 43rd year in 2019). She also spearheaded a counseling program for Hawaiian breast cancer patients.

By 1998, neither Sunn nor her aumakua could keep her disease at bay any longer and she passed away at her home in Makaha at age 47. Three thousand people attended a memorial ceremony in Makaha, where her ashes were spread at sea. The New York Times devoted three columns in covering her death, and referred to her as a “state treasure.” Hawaiian State Senator and big-wave champion Fred Hemmings spoke about Sunn’s life:

“Rell embodied everything that is great about surfing, but she grew larger than that. She represented the most basic values we hold so dear in Hawaii. Rell was always a giver and never a taker. To say she was a loving, giving, and always contributing personification of the Hawaiian aloha spirit is but a small testament to the immeasurable sum of her vital goodness.”