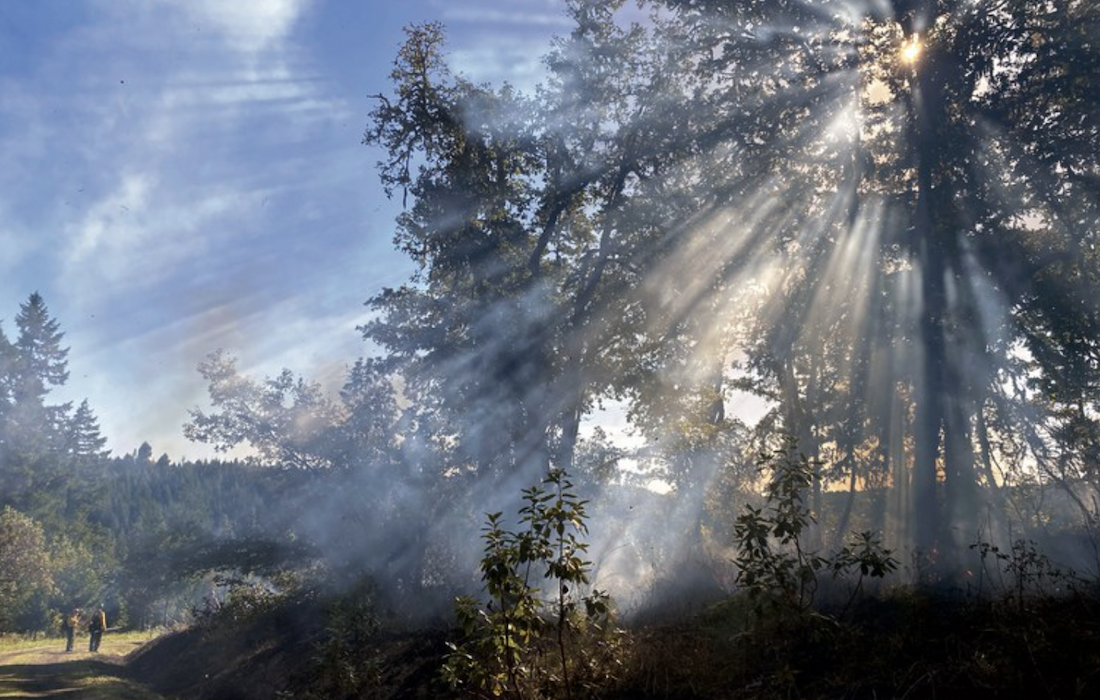 Wearing deerskin leather gloves dampened with drops of diesel and gasoline, I tilted my drip-torch down toward the earth and ignited the dry blackberry bush below. With a flick of my wrist, I made a C-shaped movement and the fuel followed my gesture, lighting the vines and leaves quickly. Aside from the faint crackle of the fire, it was silent where I stood on a hilltop at Andrew Reasoner Wildlife Preserve near Eugene, Oregon. I paused to look at my surroundings. Hundred-year-old Oregon white oaks, draped in old man’s beard — a lichen called Usnea — reached toward the crisp blue sky. Yarrow leaves poked through the bunches of invasive crabgrass, and sword and bracken ferns dotted the landscape. The hairy yellow leaves of a hazel plant next to me indicated the changing seasons.

I have spent the last three years frequenting this plot of land, driving my rundown Subaru Outback up to the highest peak, never leaving first gear. With each visit, I’ve grown closer to the kin around me, studying and witnessing the groves of oak, ponderosa pine and madrone trees change with the seasons. This fall, on a morning in mid-October, I went to the wildlife preserve for more than a visit. I was one of 15 Indigenous fire practitioners in training, participating in the first cultural burn on the property in more than 150 years.

Dressed in yellow and green Nomex with a hard hat and eye protection, I blended in with my fellow firefighter trainees: high schoolers and adults representing different tribes — Seminole, Klamath, Modoc and Chinook. Four other trainees and I were part of the Confederated Tribes of the Siletz Indians. We were joined by personnel from 10 other organizations to carry out an 8-acre burn. We’d trained for the past month, attending both in-person and online classes taught by leaders from Ecostudies Institute, a nonprofit group based in Washington that sought to make the courses more culturally aware and Indigenously centered.

I was eager to see fire reclaim its rightful place within the landscape, eager to reclaim a role in stewarding the land the way my ancestors had, using fire as a tool to maintain the savanna. The Willamette Valley once contained more than 400,000 acres of savanna oak habitat, managed with fire by the Kalapuya people. However, less than 5% of that habitat remains today; development, agriculture and fire suppression have encouraged Douglas fir encroachment.

Carrying out this burn was a significant act for me and my fellow Siletz tribal members. As a Kalapuya descendant whose people lived in the valley, I visited the land with a familiar curiosity, wondering what life was like here for my ancestors. Did they gather acorns from oak trees the same way I did? Did they find comfort, too, when red-tailed hawks circled high above the woodland canopy?

My tribe, like many tribes, carefully stewarded the land, using tools like burning and implementing fire management. But our traditional practices were violently disrupted by colonialism and continue to be impeded by the U.S. government. Our tribe — the Confederated Tribes of Siletz Indians — is composed of 27 different tribal bands, all of whom were forcibly removed from lands along the coast of Oregon and the inland Willamette Valley and relocated onto a single reservation. Because my tribe was displaced from our ancestral lands, terminated by the federal government, and then restored in 1977, we had to reclaim our knowledge of how fire was used by our people and relearn what it means to work with it. So even though I felt tremendous joy in being able to work with fire for the first time and reclaim a relationship long embedded in my culture, my bones, feelings of frustration and bitterness washed over me throughout my time on the land.

Until recently, the type of burns we conducted were outlawed, as federal and state agencies promoted wildfire suppression. While there has been an increased appreciation for how Indigenous people cared for and managed their ancestral homelands — accompanied by the recognition that past U.S. policies of fire suppression decimated ecosystems — barriers still remain for Indigenous people who want to implement cultural burns. It is easy to acknowledge the need for more cultural and prescribed burns. But it’s much harder to see them through.

Without the support of local partnerships in the Eugene area, this training for Indigenous fire-practitioners would have been nearly impossible. Relationships between tribes and non-Native organizations need to be Indigenous-led. They also need financial support: It cost the Long Tom Watershed and numerous other organizations around $20,000 to carry out this training and execute the burn.

Despite the overall understanding that cultural burns have been and remain a tradition we hope to continue, the Siletz Tribe — due to a number of colonial forces — lacks a fire team or crew to carry out cultural burns the way our neighbors, the Confederated Tribes of Grand Ronde, are doing. Five Siletz members, including myself, attended this training and participated in the burn. And by rekindling this relationship, we hope to lay the foundation for our tribe to carry out future cultural burns.

This piece first appeared at High Country News and is republished here with permission.