Book Review: The Mirage of a Town Without Cellphones 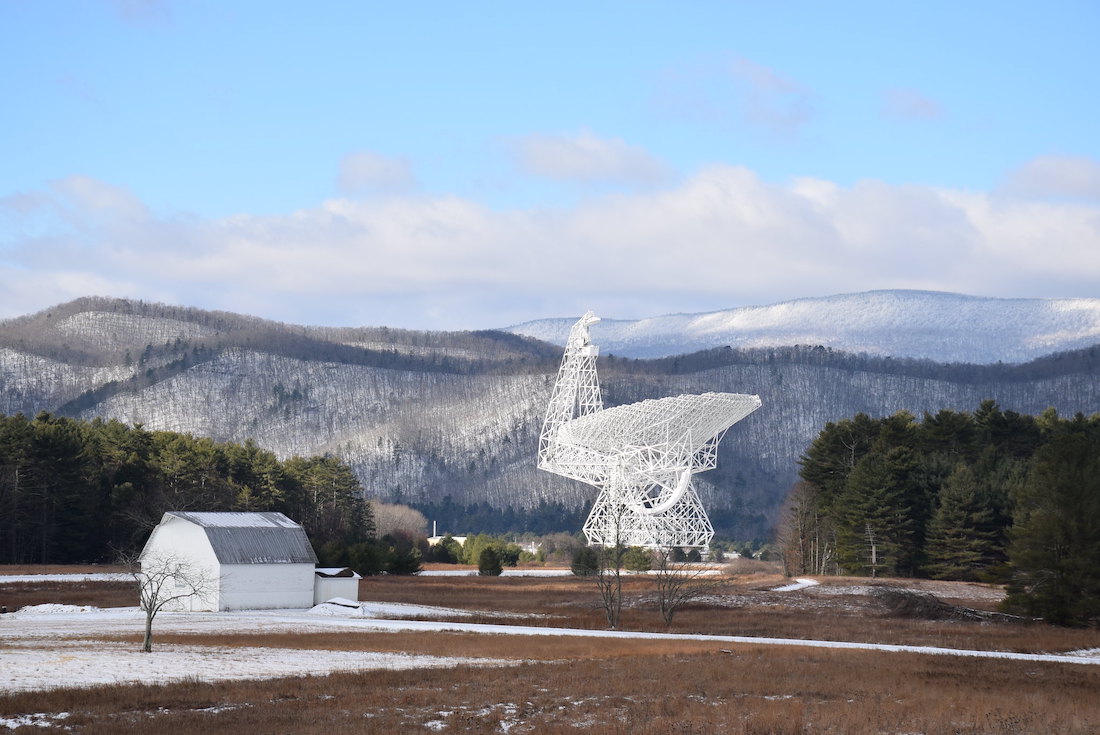 Book Review: The Mirage of a Town Without Cellphones

Near the town of Green Bank, a strange sign edges the two-lane road: “You Are Now Entering the West Virginia Radio Quiet Zone.” It’s not immediately apparent what those words mean, but they provide a clue to drivers whose phones have gone silent. The Quiet Zone means the law limits radio-wave broadcasts: No cell service, and theoretically a lack of conveniences like Wi-Fi, or certain wireless game controllers. And no microwaves unless they’re put in a protective casing. All these devices interfere with the science conducted by the Green Bank Observatory, home to a host of radio telescopes.

The Quiet Zone is also the title of a new book about the area by journalist Stephen Kurczy. Here, he thought, in the land of less technology, life might be simpler, and in line with his own desire for digital disconnection: Kurczy hasn’t owned a cellphone since 2009. Green Bank, he writes, might be “like a modern-day Walden that could free us from the exasperating demands of being always online and always reachable.” He set out to investigate what society might be like if we were all less accessible, looking to the residents of the Quiet Zone for the answer.

As the book unfolds, though, Kurczy loosens his grip on that idea: the Quiet Zone, he finds, is actually pretty loud, and plagued by problems similar to those in the outside world. And so Kurczy shifts his aim, attempting instead to understand why such an unusual set of residents — astronomers, white supremacists, dubious medical practitioners, people who say they’re allergic to radio waves, cultists, and murderers — arrived here. He shares that journey in visual prose peppered with frank dialogue and empathic descriptions of the four months he spent exploring Pocahontas County over a period of three years. “The area seemed tinged with magical realism, with an impossible menagerie of eccentrics congregating in the forest,” he writes. “How had so many random groups found their way to the same corner of West Virginia?”

A former sheriff gave perhaps the best answer. “To escape,” Kurczy summarizes. “To be left alone.” That may be true, but Kurczy’s journey forces him to reexamine the idea that disconnection is utopian, and that lack of technology means lack of complication.

The public-facing reason for the technological restrictions is the Green Bank Observatory, whose telescopes detect radio waves from space. Kurczy grounds readers with a brief but compelling history of radio astronomy: In 1931, scientist Karl Jansky accidentally discovered radio waves from space and presented his findings two years later. The field took off after World War II, and by the mid 1950s the National Science Foundation was ready to create a radio-astronomy research center — but where?

With its low population, abundance of public land, and location in a mountain valley close to the nation’s capital, Green Bank seemed ideal. Soon, both the state of West Virginia and the Federal Communications Commission instituted radio-quiet rules for the area, at different radii, to protect the National Radio Astronomy Observatory (NRAO).

The rules, still extant, are strictest within 10 miles of the facility, theoretically barring connectivity like Wi-Fi and Bluetooth. No one in town has cell service. Observatory visitors can’t use digital cameras once they pass a certain boundary. More-permissive guidelines limit fixed transmitters like cell towers and television broadcasters across a 13,000-square-mile area, each of which must be evaluated for its effect on the observatory before approval.

Today, the flagship instrument is the Green Bank Telescope, taller than the Statue of Liberty and wide enough to hold two football fields inside its dish. Kurczy likens it to a “washbasin for Godzilla.” The instrument monitors pulsars, left behind by supernova explosions, using them to hunt for gravitational waves. It can see the effects of black holes at the centers of other galaxies, and stars in formation. It also searches for extraterrestrials.

But that work is threatened by earthly broadcasts. Terrestrial signals can easily drown out weak celestial ones, just as it’s hard to hear someone whispering next to a choir. The rules exist to shush the choir. “The restrictions were based on a simple premise: To listen, we have to hear,” writes Kurczy. “To unlock the mysteries of the universe, we have to be quiet.” 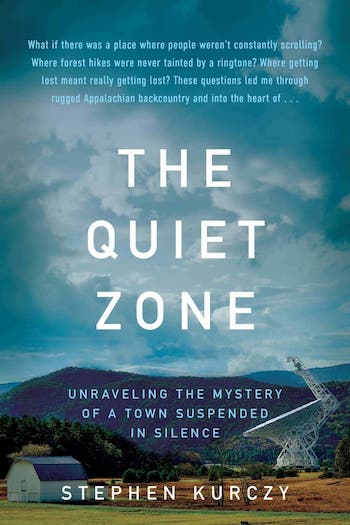 Whenever the observatory hits existential bumps — as it has in recent years, when it parted ways with NRAO, a controversy Kurczy chronicles without boring readers with bureaucratic detail — people begin to worry about the Quiet Zone’s survival. The facility, whose operation was once fully funded by the National Science Foundation, now only receives part of its budget from that governmental source, with the rest coming from private partnerships with groups like the North American NanoHertz Observatory for Gravitational Waves and the Breakthrough Listen project, which is involved in the search for extraterrestrial intelligence.

Kurczy, in investigative mode, digs into why the zone may not be in acute danger even if the observatory is: a nearby National Security Agency outpost called Sugar Grove, which appreciates radio-quiet for surveillance. “Sugar Grove was like the bigger, stronger brother protecting its kid sibling in Green Bank,” he writes, putting the situation in political context with astronomy’s other connections to the military-intelligence complex.

Despite the big stick, keeping the quiet has never been easy. Today, it’s Sisyphean. The sources of radio interference are ubiquitous and socially, economically, and educationally desirable. Helping check their influence is EMITT, the observatory’s electromagnetic interference tracking truck, whose instruments pinpoint illegal radio waves. “It reminded me of the wraith-hunting vehicle from ‘Ghostbusters,’” writes Kurczy.

But he notes that observatory officials now mostly monitor interference, rather than shut down its neighbors’ emissions. “If they find a house that’s particularly bad, then they’ll bring that to my attention and I’ll take care of it,” the observatory’s business manager, who has since retired, told Kurczy. “By that,” Kurczy explains, “he meant he might initiate a conversation with the offender and politely explain the observatory’s need for radio quiet.”

The observatory tries to get compliance through education, the then-business manager explains, but “We don’t have the staff to do any further enforcement.” This passivity becomes apparent when Kurczy rides in EMITT: “Within five miles of the telescopes, we counted more than 200 Wi-Fi signals,” Kurczy says. So the quiet zone is pretty noisy.

Kurczy discovered one group less likely to break the rules: electrosensitives, who believe they are essentially allergic to radio waves. The World Health Organization does not recognize electromagnetic hypersensitivity as a medical diagnosis. Nevertheless, starting in the mid-2000s, people began moving to Green Bank because they believed radio waves made them sick, and today their number has grown to over 100, Kurczy estimates.

Sensitives make good observatory neighbors, unlikely as they are to set up Wi-Fi networks. Kurczy ultimately develops skepticism toward the condition — noting that electrosensitives “seemed to be fleeing something in their lives aside from electromagnetic radiation” — but he’s sympathetic to their possible motives. At one point, he wonders if the original electrosensitive resident’s reaction to cell service and Wi-Fi was an “intense manifestation of the kind of tech overload that we all experience at one time or another. Although she was an extremist, there was something very human about her search for quiet.”

Spies and sensitives intrigue Kurczy, and he explores their influence on the region, as well as the complications of disconnection, like students lacking internet infrastructure, and dicey emergency services. The county — whose biggest employers are in health care, education, hospitality, and government — has a median household income of about $41,000, compared to the U.S. average of approximately $69,000.

“The Quiet Zone” also examines Pocahontas County’s darker side. “It did not occur to me that a community bathed in quiet could be anything but idyllic,” he concedes. And yet he learns about Patch Adams, the clowny doctor made famous by the eponymous movie, who took millions of dollars to build an innovative rural hospital that was reportedly never actually built. Unsolved murders cast shadows in the forest. The remnants of a once-powerful neo-Nazi group, formerly headquartered here, live in the hills.

“The vision that drew me in turned out to be a mirage,” he writes. The Quiet Zone, he learns, is not a modern-day Walden.

Kurczy has a tendency to interpret these seamier sides as symptoms of the Quiet Zone itself, rather than as instances of general human badness — as can happen when you begin by seeing a place as inherently other. He never quite acknowledges that most any place you look at closely enough is going to be a microscale version of wider society. “The Quiet Zone” demonstrates, if inadvertently, the fractal nature of civilization –- smartphones or not.

In the end, though, Kurczy comes to appreciate the intrinsic value of such a weird, barely connected community. “For the electrosensitives seeking relief from their pain, for the astronomers in need of a quiet sky, for the hippies desiring a peaceful landscape, for the tech-addicted tourists forced to go offline, the Quiet Zone was an unexpected refuge,” he writes. “It was an escape, at its best, from ourselves.”

Sarah Scoles is a freelance science journalist based in Denver, and the author of the books “Making Contact,” “They Are Already Here,” and the forthcoming “Mass Defect.” From 2010-2012, she was a public education officer at the National Radio Astronomy Observatory’s Green Bank facility. This article was originally published on Undark. Read the original article.