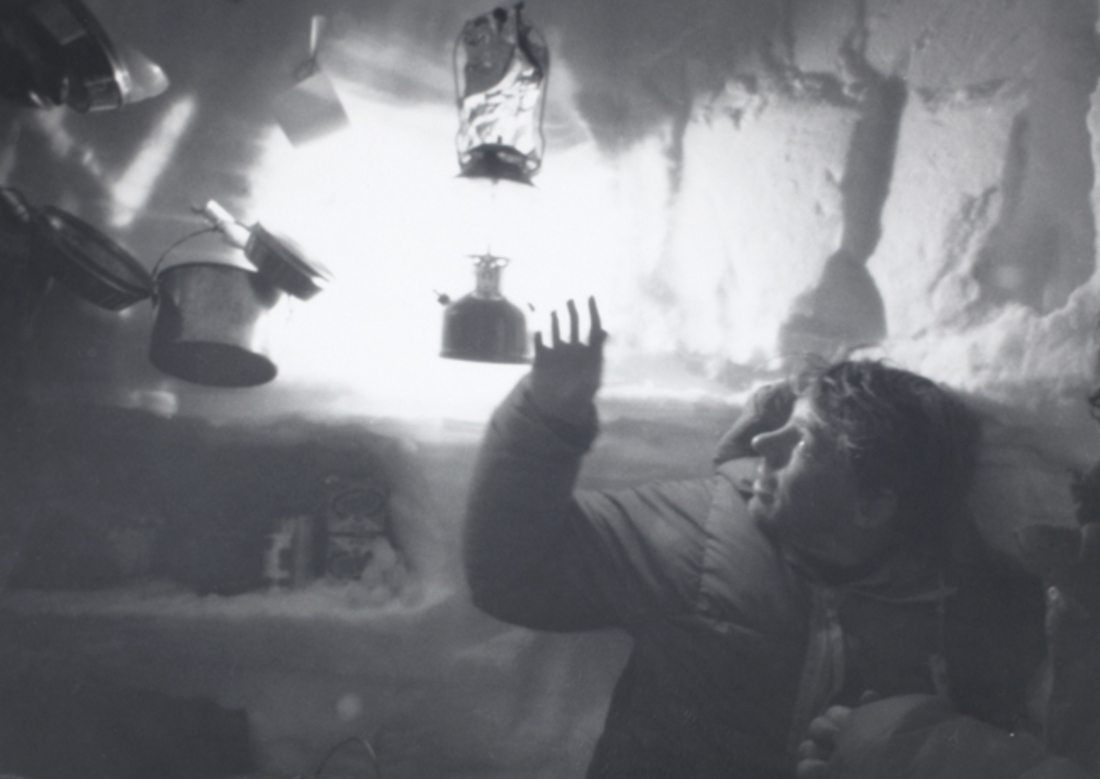 This week, we’re remembering some incredible tales of survival in brutal conditions. There’s just something about these stories that draw us back again and again. We’ve updated the original piece we published back in 2013 with links to books for further reading. -Ed.

Got cold outside this winter, didn’t it? Had to turn the heat on in your house and everything, did you? Put that extra blanket on the bed at night. Yeah, that’s tough. The history of mountaineering is rife with people who know a few things about sleeping in uncomfortable places, sometimes a little cold – like minus 100 degrees Fahrenheit or so.

Here’s a list of people who have, due to circumstances, had to tough it out in bad situations, bad enough that they had to wait until morning (sometimes more than once) to continue down the mountain. Hours of darkness and cold, without a tent, sometimes without a sleeping bag, hell, sometimes without even a decent puffy jacket. Think about that when you pull the blankets up over your face tonight.

1. Hermann Buhl, Nanga Parbat, 1953
Hermann Buhl was so fast on the first ascent of 26,660-foot Nanga Parbat that he just decided to leave the rest of his German-Austrian climbing team behind and summit without them. He topped out at 7 p.m., but lost a crampon on the descent, which slowed him, and he eventually had to bivy – standing up, with one handhold – on a rock ledge above 8,000 meters. He had no down jacket and hadn’t used oxygen on the ascent. He walked into camp the next evening, 41 hours after he had left, hallucinating and frostbitten. The Nanga Parbat climb is the only solo first ascent of an 8000-meter peak. Buhl wrote about it in Nanga Parbat Pilgrimage: The Lonely Challenge, and jeez, it’s a heck of a read.

2. Willi Unsoeld, Tom Hornbein, Barry Bishop, and Lute Jerstad, Everest 1963
On the American Everest Expedition in 1963, Willi Unsoeld and Tom Hornbein decided that climbing the South Col route, which at that time had seen less than 10 ascents (including Jim Whittaker and Sherpa Nawang Gombu a few days earlier, the first American ascent of the peak), wasn’t quite adventurous enough. They legendarily headed up the mountain’s West Ridge, a bold route with no retreat option – midway up the route, they realized that up and over the summit would be their only way down. They met American climbers Barry Bishop and Lute Jerstad, who had climbed the South Col route, around 28,000 feet. Disoriented, and Bishop and Jerstad out of oxygen, the men dug in just after midnight and spent the night in what was the highest bivouac at the time. The men survived, but lost some digits to frostbite in the aftermath. The bivouac is chronicled in Hornbein’s book, Everest: The West Ridge.

3. Dave Johnston, Art Davidson, and Ray Genet, Denali, 1967
On February 28, 1967, Dave Johnston, Art Davidson, and Ray Genet, became the first climbers to stand on Denali’s 20,322 summit in winter. On the descent, the men dug a tiny snow cave above 18,000 feet and spent March 1 there in a blizzard. And March 2. As the windchill dropped temperatures as low as -148 Fahrenheit, the men hung on – for six days total. Art Davidson’s account of the climb and descent, Minus 148 Degrees, became a mountaineering classic.

4. Doug Scott and Dougal Haston, Everest, 1975
In 1975, Doug Scott and Dougal Haston put up a new route on the Southwest Face of Mt. Everest, climbing for 14.5 hours and topping out at 6 p.m., then realizing a moonless night was about to set in. They considered their options, and rather than try to descend in the darkness, they located a snow cave they’d dug earlier in the day, enlarged it a bit, and hunkered down – at 28,750 feet, the highest bivy in the history of mountaineering. Despite hallucinations and a lack of oxygen, neither man suffered any frostbite. They made it into camp the next morning at 9 a.m.

5. Doug Scott, Mo Anthoine, Chris Bonington, and Clive Rowland, Baintha Brakk/The Ogre, 1977
Not one specific bivouac, but a series: Scott, Anthoine, Bonington, and Rowland spent a number of nights descending from the Ogre’s 23,900-foot summit, after Scott broke both legs when he slipped rappelling and pendulumed into a gully. He and Bonington bivvied at 23,000 feet without food or a stove. The next morning, Anthoine and Rowland, who had climbed a different route, joined them and helped Scott into a snow cave they’d dug below the summit. They spent two nights there waiting out a storm. The four men then went up to the west summit with Scott slowly jumaring ropes. They dug a snow cave on the other side of the peak and started to descend in the storm, Scott crawling. Then Bonington rappelled off the end of a rope and broke two ribs. On night number six, they got back to their tents and wet sleeping bags, and spent one more night at that camp (still above 21,000 feet) before they were able to descend. When they got to base camp, they found it abandoned – the other climbers figured they were dead. Scott and Bonington waited five days at base camp while Anthoine ran ahead to organize porters to carry Scott out. Then it only took three days for the porters to get Scott to a place where he could be picked up by a helicopter – which crash-landed while dropping him off in Skardu. No one was hurt, but Bonington sat out another week in the mountains before he could get down.

6. Jim Wickwire, K2, 1978
At 5:20 p.m. on September 5, 1978, Lou Reichardt and Jim Wickwire became the first Americans to summit K2, the second-highest mountain in the world. Reichardt started down the descent before Wickwire, who changed the film in his camera and buried a list of the expedition’s supporters in the snow on the summit. Wickwire started down too late, and neglected to bring a flashlight or headlamp. He dug a bivy ledge in the snow 450 feet below the summit and hung on, waking during the night to realize he had slipped down the snow slope within about 30 feet of a 10,000-foot drop. The next morning, 14 hours after parting with Reichardt, he ran into John Roskelley and Rick Ridgeway, who had climbed up in search of Wickwire and/or try for the summit themselves. He convinced them he was okay to descend by himself and made it to rejoin Reichardt at the team’s high camp.

7. Joe Simpson, Siula Grande, 1985
In 1985, Joe Simpson and Simon Yates boldly climbed the first ascent of the West Face of 20,813-foot Siula Grande in the Peruvian Andes, alpine-style. On their descent of the north ridge, Simpson slipped off an ice cliff and shattered his right leg. Yates tied their twin 150-foot ropes together and began lowering Simpson down the ridge 300 feet at a time as a storm rolled in. Eventually, Yates unknowingly lowered Simpson off an overhanging cliff, and Simpson hung on the rope out in space, unable to communicate up to Yates. He tried climbing the rope, but his hands were frostbitten. Yates, slowly slipping from a standing belay stance, eventually used Simpson’s knife to cut the rope, dropping Simpson into a crevasse. Simpson spent a night inside the crevasse as Yates, figuring his partner was dead, descended to their base camp. Simpson, unable to climb up out of the crevasse, downclimbed and found a way out, and spent the next three days crawling and hopping five miles back to camp, reaching Yates just before he was to leave. The story was made famous in Simpson’s book, Touching the Void, and in a movie of the same name.

8. Beck Weathers, Everest, 1996
On May 10, 1996, Texas pathologist Seaborn Beck Weathers took off for the summit for Everest with guide Rob Hall. On his way up, the high altitude and UV radiation took a toll on his eyes, which, post-radial keratotomy surgery, developed lacerations and lost vision. Hall told Weathers to sit and wait while he guided clients to the summit, so he did. Unfortunately, Hall never returned to get Weathers. A storm rolled in. Another guide who was descending added Weathers to his four-person rope team and attempted to guide them down to high camp, but was unable. He left the team and descended to get help. When the guide returned, Weathers and another climber had lapsed into hypothermic comas. They were left for dead 300 yards from camp, Weathers’ hands and face exposed. In the morning, Sherpas found Weathers and the other climber and chipped ice off their faces, finding them to be breathing, but nearly dead. A few hours later, Weathers regained consciousness and stumbled into Camp IV, alive. He wrote about his battle and the aftermath in his book Left For Dead.

9. Aron Ralston, Blue John Canyon, Utah, 2003
In 2003, Aron Ralston became famous for cutting his arm off after a boulder shifted onto it, trapping him in the remote Blue John Canyon in the Utah desert. But before that, he spent an exhausting five nights standing next to the boulder in the chilly desert air, running out of water and eventually resorting to drinking his own urine. After amputating his own arm, he walked eight miles out of the canyon, including making one rappel, before he was spotted by a rescue helicopter and airlifted to a hospital. Ralston’s book, Between a Rock and a Hard Place, became a bestseller.