Working From Home In a Rolling Home Named Bernie Vanders 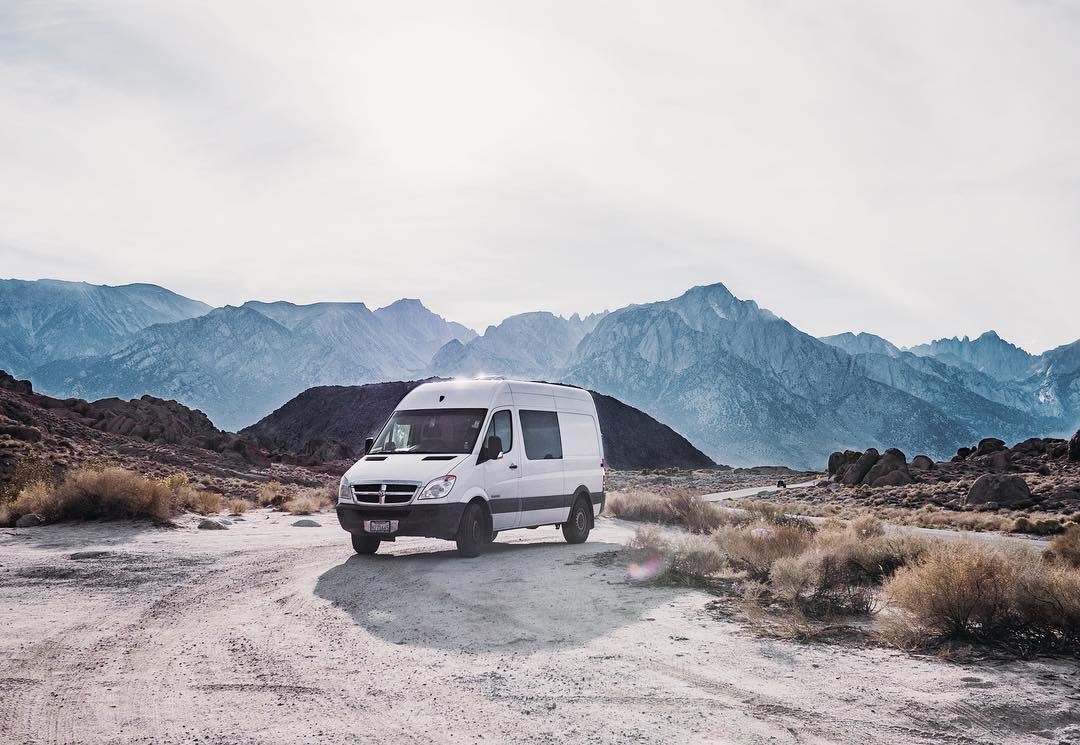 Working From Home In a Rolling Home Named Bernie Vanders

When Maggie Lam’s mother was diagnosed with breast cancer, it served as a wake-up call for the entrepreneur and her partner, Dom Crosby, who were working in San Francisco’s tech bubble at the time. “The whole thing made us reevaluate what we wanted to do,” says Lam. “The two paths in front of us were either stay at our jobs, probably get promoted up the chain and so on and so forth, or make some sacrifices, but ultimately get to see all these places we’ve always wanted to see.”

They chose the latter, spending five months kitting out a stylish Sprinter named Bernie Vanders, then negotiating with their bosses to work from the road for another five while cruising the U.S. Almost two years later, they’re still working remotely (and Lam has launched a business consulting firm on the side), and they’re still chugging along.

Lam and Crosby spent the winter months parked in Truckee, near Lake Tahoe, taking advantage of easy access to gorgeous scenery and making the most out of those sweet Sierra powder days. And it looks like they’ll stay parked there a little while longer, given the current state of the world. The couple had been planning to leave soon for a four-month trip to Europe, where they’d purchase a second van and decamp to Crosby’s parents’ home in the U.K. to complete the build. For now, however, all bets are off and Bernie remains an only child. “We’re looking forward to spring,” says Lam. “Hopefully things will settle down a bit.” Indeed. 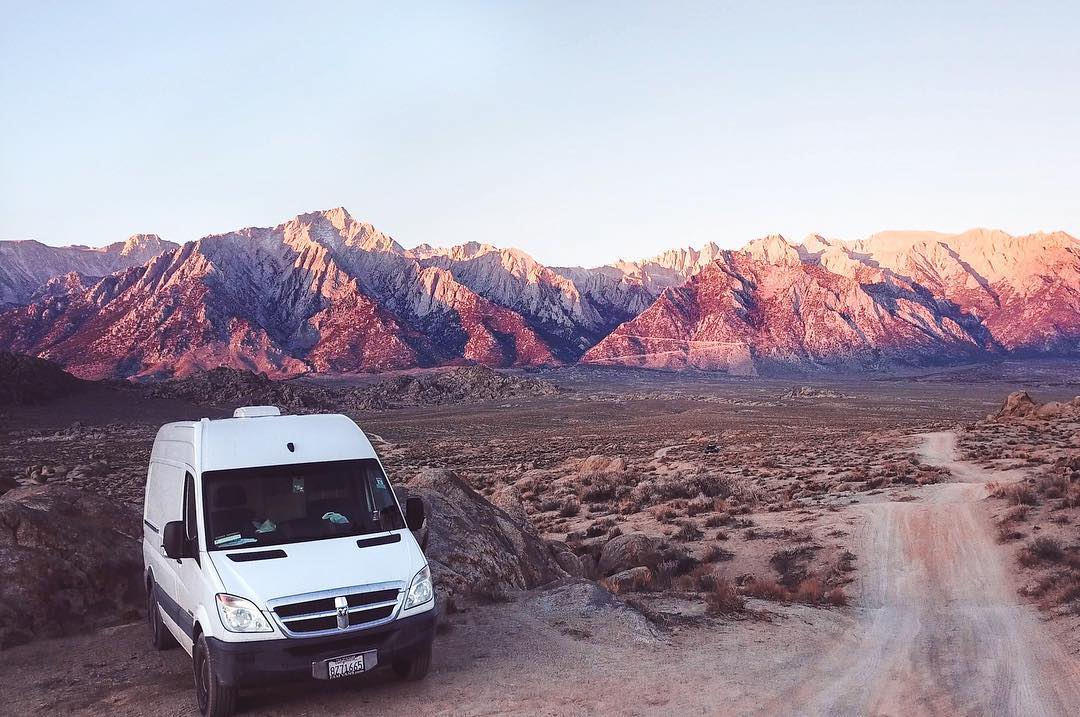 What is your vehicle’s name?
It’s called Bernie Vanders; Bernie, for short. We were on the Bernie Train really early on. 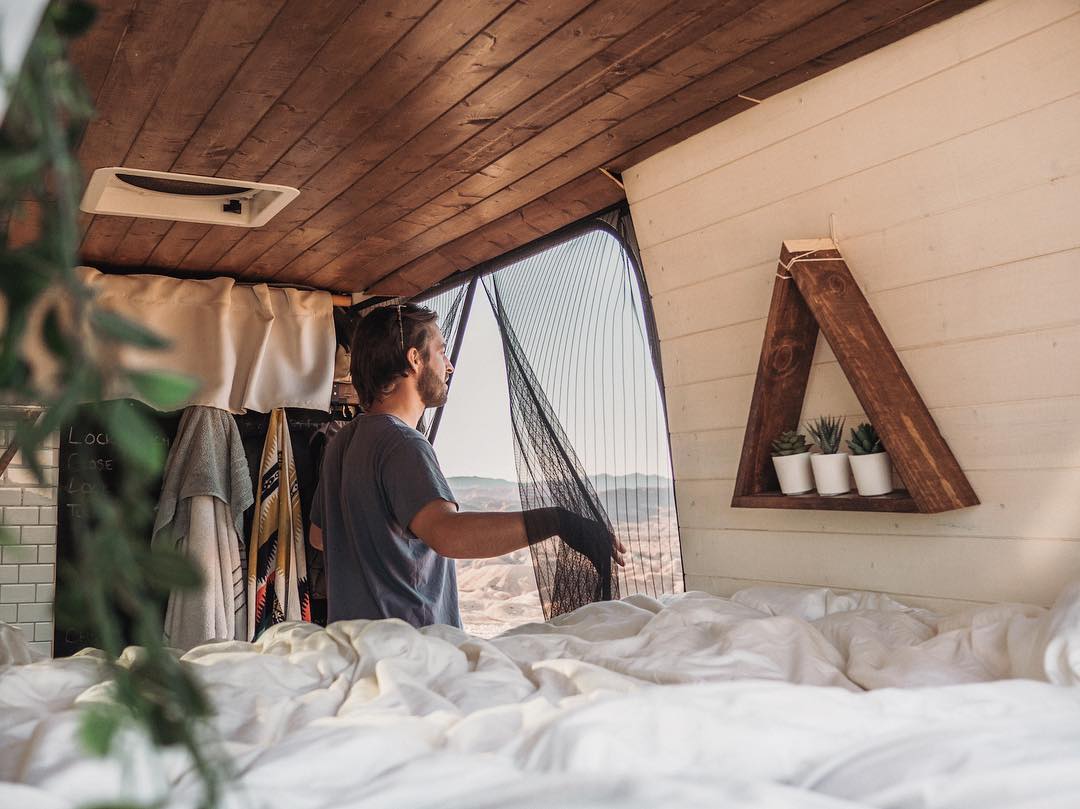 How did you get it?
We were big weekend warriors even while we were in the Bay Area. We didn’t own a car, but there’s a company called Getaround where you can rent other people’s cars, so we’d rent one for the weekend and road trip all over the place. Our jobs had fairly liberal remote working and vacation policies, so we would try to take advantage of that as much as we could, but at some point, it still didn’t feel like enough. We decided to just take the plunge. We found a used van in L.A., flew down, and drove it back up to the Bay Area. We were both working full-time, so we worked on the van every single weekend. We lived in Oakland and it was super unsafe to park the van in front of our apartment, because it would get tagged, so we had to park it in Emeryville. We’d pick it up every Friday evening, park it in front of our place, work on it, and then drop it back off Sunday evening. That was our life for 5 months—no social life or anything.

How did you modify it?
We started by thinking about what was important to us; one of the main things was making sure that we could make it as renewable as possible. A popular choice for a lot of van conversions is to have a propane cooker and a big propane tank that will last a month or two, but we didn’t want to go that route. We have an induction cooker, so we have 250 amp hours of electric in our batteries in the van, a 1500-watt inverter to support the induction, because it takes quite a lot of power, and some solar panels on the roof. And our kitchen’s got a big sink—we have seven gallons of fresh water and of grey water, so that lasts us three or four days before we have to fill it up.

We really wanted it to have a nice homey feel, so we went with a lot of walnut-stained wood; the ceiling and wood countertop in the kitchen area are walnut-stained, we’ve got white panels on the walls, and we’ve done up the floor. We wanted to make sure we had some eating room, as well, so we built a bench area that partially covers the door. We’ve got a Dometic fridge, so during the day, there’s a cushion on top so you can sit on it. There’s also lounging room on the bed, and we’ve got storage along the side of the bed, and over the driver and passenger seats.

We also have two fold-up kayaks in the back, made by a company called Oru Kayaks; they’re origami-style kayaks. We knew we wanted to take those with us, so when we were building it out, we made sure we had storage for those underneath the bed. And the bed is always there; we just figured that we didn’t want to be making it every day.

We definitely went through some iterations. The bench thing that I described? We changed that up five months into the build, because it used to be on wheels; we had a couple instances where it would unhook from the buckle and slide into the back of our seats when we were driving, so we had to scrap that. The whole thing was a learning experience, for sure. 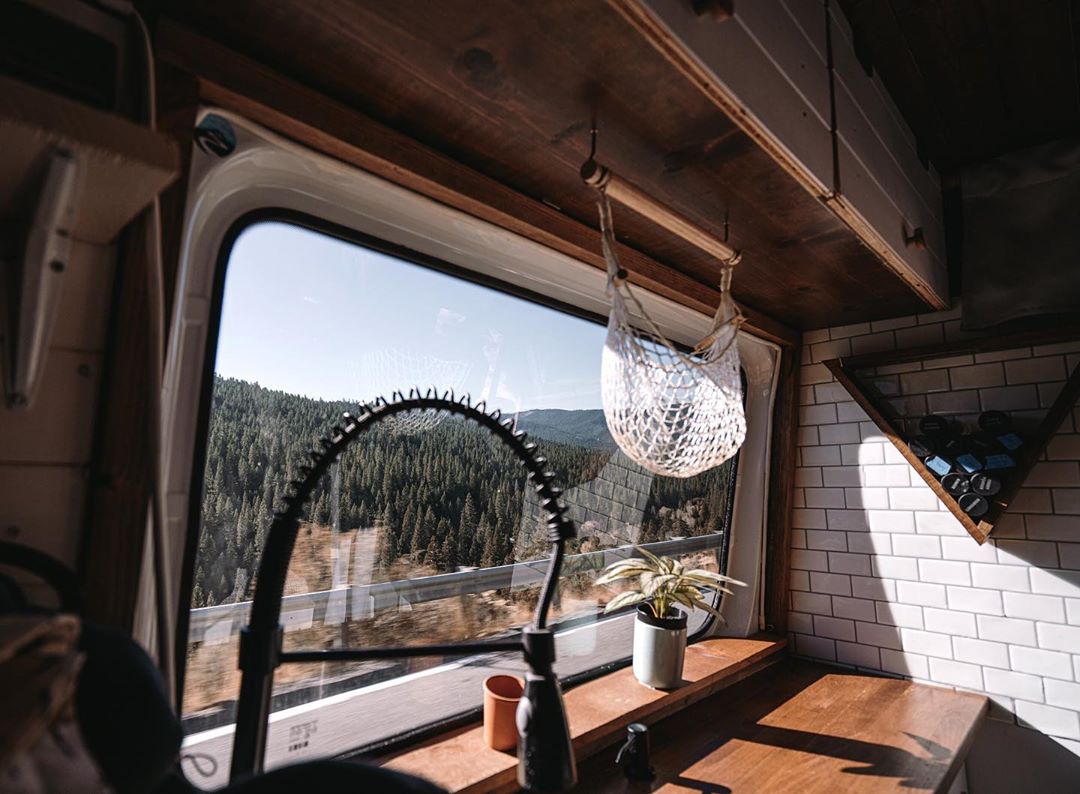 What do you get up to out there?
Kayaking, obviously! We love to take them out on lakes, bays, calm rivers. We have friends that are able to work remotely, as well, so we love to do group trips with them. And since Dom is English, it was super interesting for him to be able to see all the different parts of America, so we spent time in the south, and went to national parks that are not necessarily on everyone’s radar, like Big Bend National Park in southern Texas. Whenever we can find a natural hot spring, that’s a big plus for me. We do a lot of hiking, we go to breweries, try local cuisine, meet up with people. I’ve been trying to be more active in the vanlife community; there are a couple people that we’ve been trying to arrange a vanlife gathering with.

Cons?
You definitely have to time-manage a bit. I think there’s a misconception from people who aren’t in vanlife that everyone is just running around being irresponsible and having fun, but so many people in this life actually run their own businesses. You have to block off time to find quiet places with a strong wifi connection to work, which can be a challenge. Then, you just have to get used to a certain level of discomfort. You can clean as much as you want, but dirt and sand is still going to get in the van. You’re going to have to do laundry at a laundromat, which might be a change if you’re used to having a washer and dryer in your home. And you’re not going to be showering every day, which was fine with us; we had a portable shower and a Planet Fitness membership, so we showered there. But these are definite barriers to some people. I had a friend tell me that she could never do it because she doesn’t think she could go without washing her hair for a day. 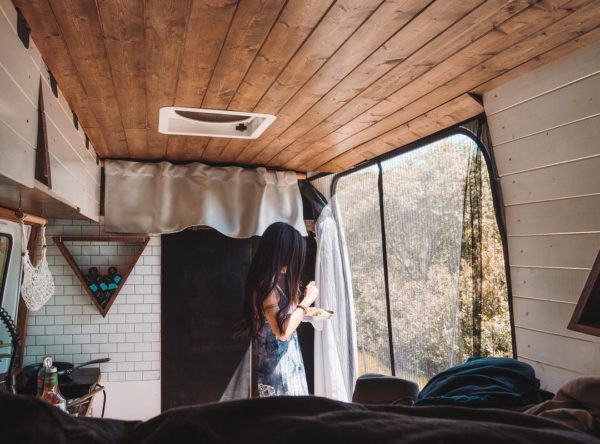 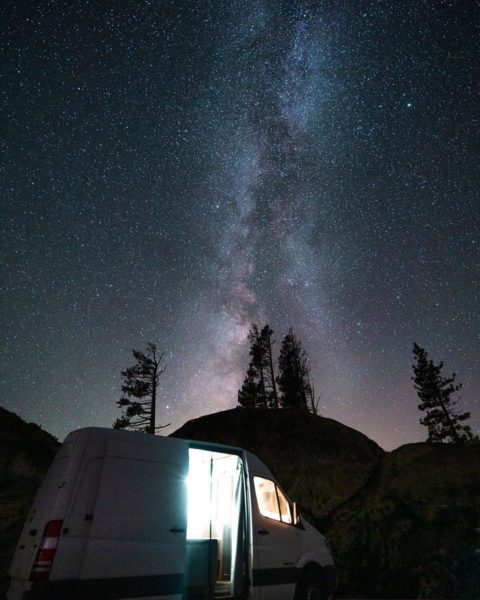 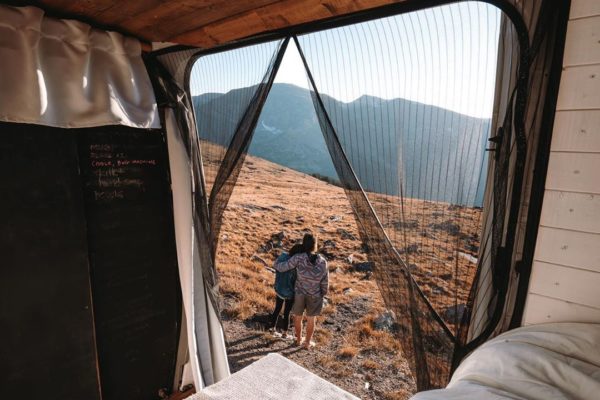 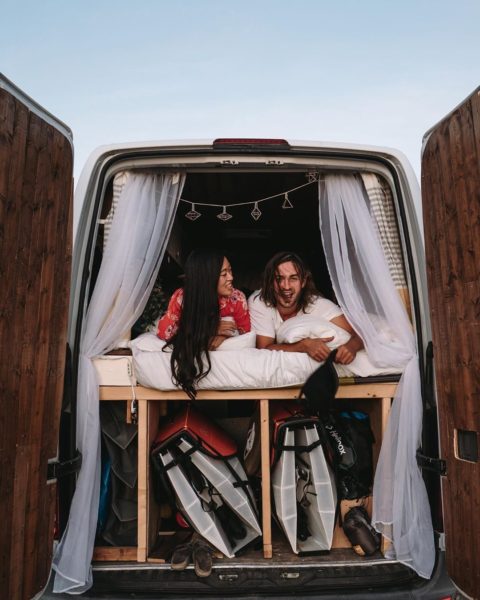 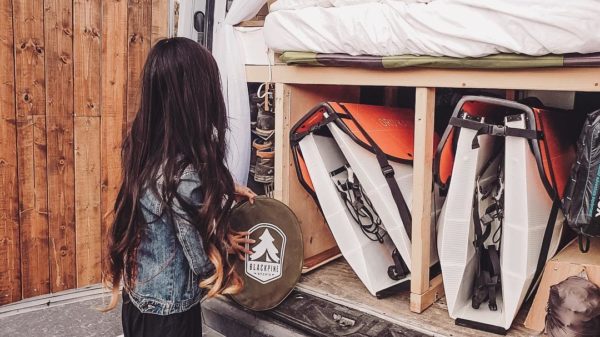 Pros?
You are able to appreciate the little things in life—waking up and watching the sunrise, meeting people that are potentially outside of your comfort zone, being in new groups. It also puts work-life balance at the forefront of your priorities. Like I said, a “con” is that you have to time-manage for work, but at the same time, you’re doing that because you want to take advantage the beauty all around you.

It’s also helped us realize how few belongings we can go with. There are so many things that we thought were necessities when we lived in an apartment, and when we downsized, we sold a bunch of our stuff and put a few things in storage. Honestly, we don’t miss most of those things. It’s kind of nice to have your little home on wheels follow you everywhere. I also think it brought us closer. It’s a small space, so you will argue with a significant other if you’re traveling with them, but at the same time, you get to experience so many things together. It has deepened our love of travel. 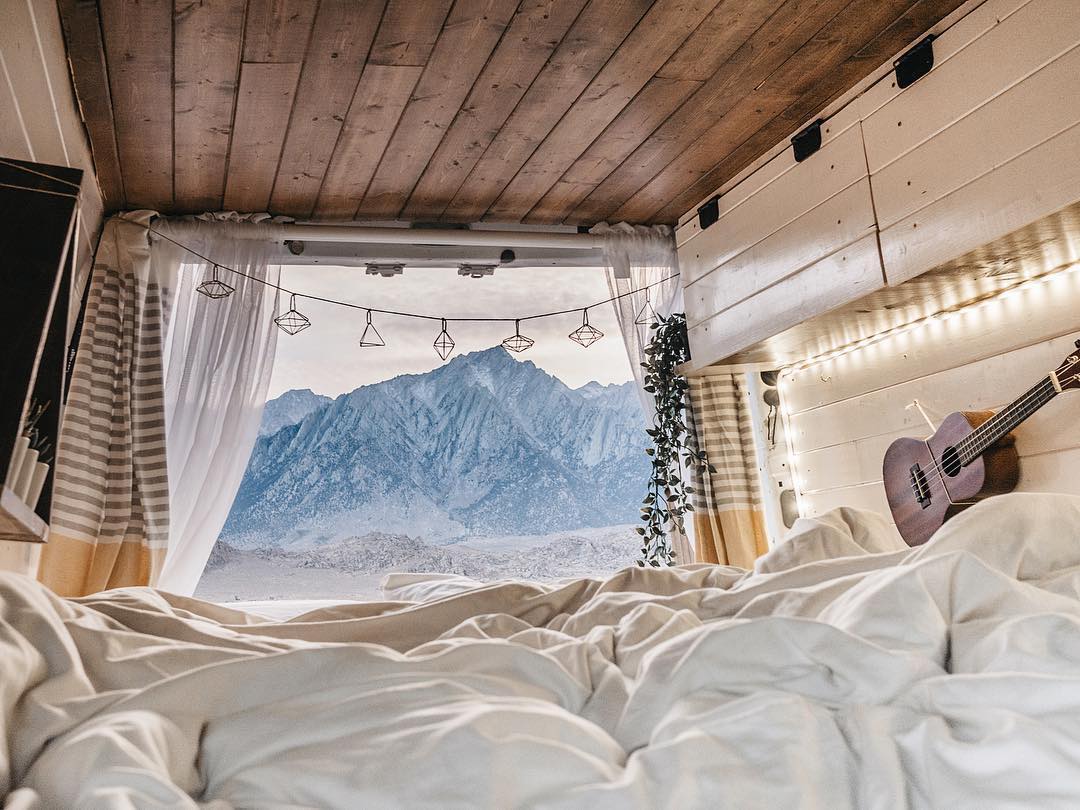 What are the biggest things you’ve learned so far by living in a van?
One of the number one things that has changed the course of our life the most was deciding to do vanlife. It’s definitely showed us that we’re more capable than we thought. We weren’t electricians and we weren’t carpenters, so it was daunting at first, but having gone through that experience, you realize that so much of what people do is learn along the way, anyways. Now, there are a lot of things that we want to learn, like woodworking and pottery. It definitely ignited that love of wanting to create.

Trying to make our work and life focus around travel, rather than trying to fit travel into the spaces around work—that’s been a huge shift in mentality for us. There are some challenges and things we gave up from a career aspect, but we’re so much happier in all the aspects outside of work that the sacrifice was totally worth it to us.

And I know it sounds so cheesy, but we’ve learned not to wait to do things. There are so many people that say, “Oh, that’s so great, I wish we could do that!” I’m like—you can. You just have to make it a priority. At some point, you have to decide that now’s the time. With my mom getting sick, I realized—I don’t want to wait until I’m retired to do these travels; I want to do them while I’m young and have the energy. I’m a first-generation Asian American. My mom’s from Vietnam; she was a refugee. My dad’s from Malaysia. I realize that they didn’t have these opportunities, and I do. I want to appreciate that.