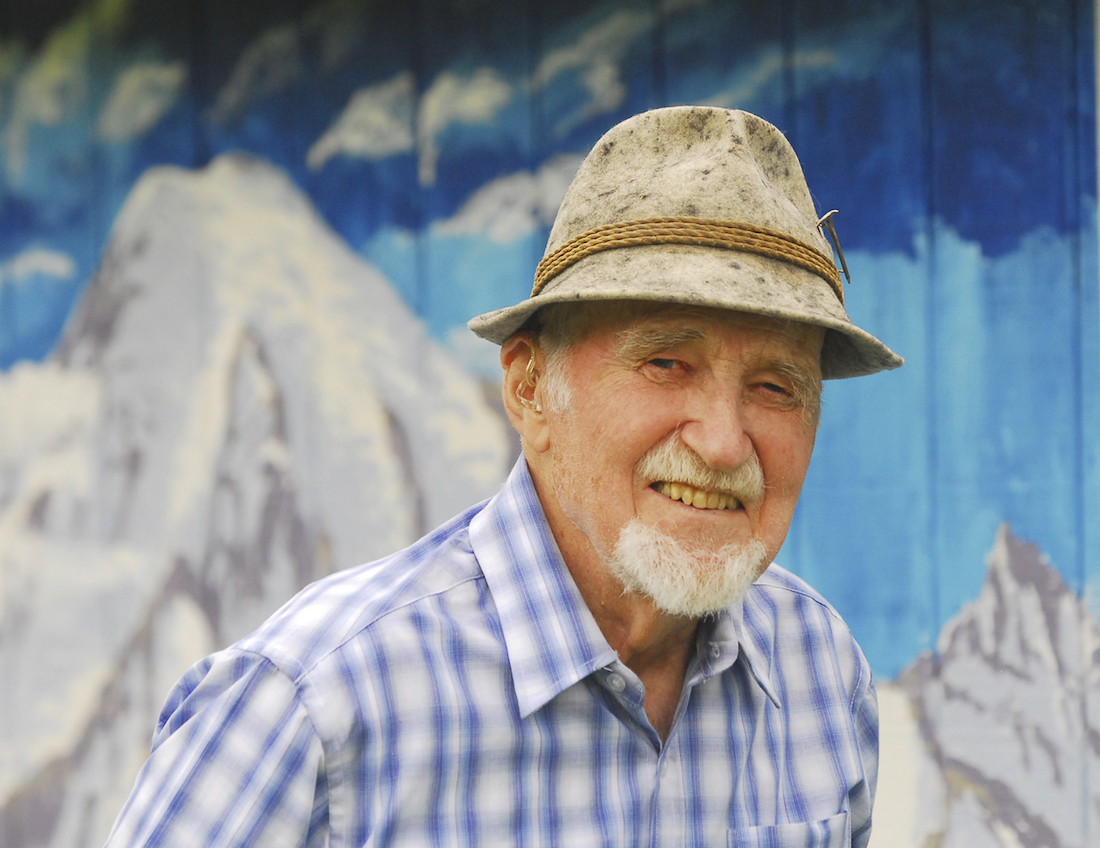 In early August 1953, the American Karakoram Expedition was hunkered at more than 25,200 feet on the Abruzzi Spur of K2, the highest unclimbed mountain in the world at the time. They needed only a window of clear weather to launch their historic summit bid. Instead they got snow and punishing winds, for ten days running. In those pioneering days of high-altitude mountaineering, no party had ever stayed so long at such a height.

As the seven other climbers waited and worried and schemed, Dee Molenaar painted. A 35-year-old artist and Mt. Rainier summit guide, Molenaar always carried a box of watercolors with him in the mountains. Now, his back to the tent’s pounding canvas, he painted two loving portraits of the mountain on which he and his friends were stormbound. The summit was tantalizingly close, but outside the tent’s thin shelter the climbers could see nothing but clouds and blowing snow, so Molenaar worked from memory. The water he used to wet his brushes was an extravagance at such altitude, where fuel for melting snow was in short supply, and Molenaar’s companions made him drink the gritty pigmented water when he finished his artwork. The watercolors—a dreamy view from base camp, and another of the team’s Camp VII, both in shades of white and pastel browns—are the highest paintings ever made, though just a colorful footnote in the most storied expedition in American mountaineering.

As the team waited high on the shoulder of K2, 26-year-old Art Gilkey developed blood clots in his calf. Team leader Charlie Houston, a medical doctor, examined him and told the others that when the clots reached Gilkey’s lungs, as they almost certainly would, Gilkey would die.

Though they knew there was very little hope for Gilkey, all of them committed themselves to the impossible task of bringing him down the world’s second-highest mountain. When the storm cleared, they wrapped Gilkey in a sleeping bag and tattered tent, put his feet into a rucksack and started down. Toward the end of the day, four of the party were roped in two-man teams, and Pete Schoening was preparing to lower Gilkey with a line wrapped around the handle of his ice axe, which he’d thrust into the snow behind a small boulder to use as an anchor. Molenaar had taken a rope from Gilkey and tied it around his waist.

Then a man slipped, pulling his rope partner with him. Those two swept another pair off their feet, and then Gilkey and Molenaar were caught up in the tangle. As the six men hurtled down a 60-degree slope toward a sheer drop, the seventh, Schoening, dug in his heels and prepared to be ripped from the side of the mountain. Instead, the others came to a stop, one-by-one, the rope stretched pencil-thin.

Houston was knocked out, the others shaken and bruised. Molenaar had a cracked rib and a deep slash in his hip. But somehow, all of them were alive. The climbers collected themselves, anchored Gilkey in the snow and spent a few minutes establishing an emergency camp nearby. When they came back for Gilkey he was gone, carried away in an avalanche or, some later speculated, having somehow cast himself loose to save the others from the dangerous task of rescuing him.

The team never reached the summit, but they left an indelible mark on mountaineering. The so-called miracle belay, and the brotherhood of the rope it represents, stands as shorthand for all that is good in mountaineering—teamwork, self-sacrifice, toughness, skill. In the assessment of mountaineering legend Reinhard Messner, “They failed, but they failed in the most beautiful way possible.”

The climb had a profound effect on Molenaar. “In my ‘twilight years’ I’ve come to realize how empty my life would have been if devoid of mountains and the friendships gained through climbing, skiing, and geologizing,” Molenaar wrote many years later, reflecting on a mountaineering career that would span more than 80 years. “I’ve felt a growing kinship with the observations of Thoreau and Muir, and of one religious philosopher, who wrote: ‘Rocks and mountains are a reflection of God’s solid and grand ideas.’” 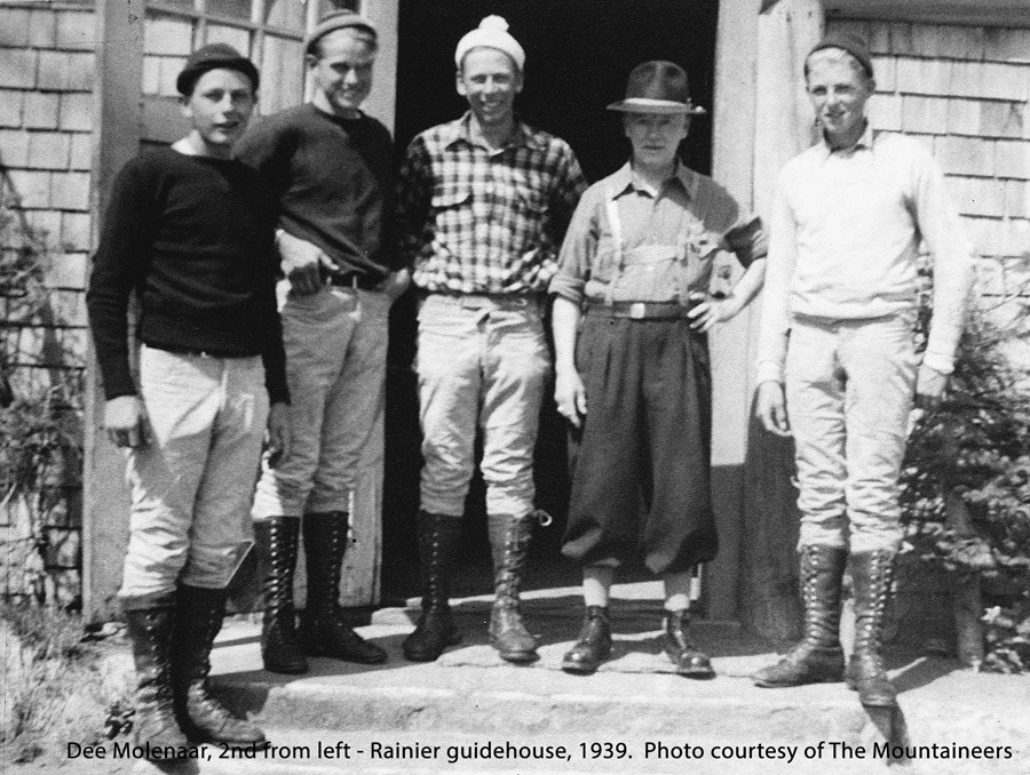 Molenaar, second from left, with his brother K, head guide Clark Schurman and friends at the Mt. Rainier guide house in 1939. The quartet drove from Los Angeles in a 1928 Ford Model A. Photo courtesy of The Mountaineers.

Dee Molenaar was born in Los Angeles to Dutch immigrant parents in 1918. As teenagers, he and his brother Cornelius—known to all as “K”—explored the nearby San Gabriel Mountains and Sierra foothills. In 1939, when Molenaar was 21, the brothers and two friends drove north in a 1928 Model A Ford, drawn to the high peaks of the Pacific Northwest. When they reached Mt. Rainier, they convinced authorities to let them attempt the mountain without a guide, citing their recent summits of Mt. Shasta and Mt. Hood. Then, permits in hand, they marched down to the guide house to rent the required gear. There we met Clark Schurman, chief guide of the Rainier National Park Company, who took one look at their homemade ice axes and smooth-soled, knee-length boots and offered to rent them the needed equipment for half price.

“Somehow he seemed to take a liking to us, perhaps through empathy for our combined enthusiasm and obvious lack of much experience climbing these glacier-clad volcanoes,” Molenaar wrote in a memoir, High and Wide With a Sketchpad, excerpted in the Northwest Mountaineering Journal. “Fortunately for us, the weather did not cooperate and we were stormed off the mountain at 11,000 feet.”

When he got back to L.A., Molenaar sent Schurman a watercolor of Mt. Rainier, and he received a job offer in return. The job paid $200 a season, with $100 deducted for room and board, and consisted primarily of herding tourists to the ice caves at the terminus of the Paradise Glacier and occasionally guiding climbers on the Kautz Route. Summits paid a $15 bonus, $25 for lead guides. Molenaar led eight parties to the top of Mt. Rainier in 1940 and 1941, and he climbed on his own or with K whenever they got the chance. At the end of the 1941 season, the brothers lapped Rainier in 24 hours but kept mum about the feat. Speed climbs were considered bad form in those days, but more to the point, the president of the Rainier National Park Company felt that making the mountain look too easy would be bad for the guiding business.

In fall 1941 Molenaar guided a group of Navy ensigns to the top of Rainier. “They were all young, eager and in top shape and had no problems negotiating terrain with which none had any previous experience. Later, I learned that five of the seven died at Pearl Harbor on December 7, 1941, only three months after our enjoyable camaraderie on the mountain,” he wrote.

The Second World War would interrupt Molenaar’s climbing career and kickstart his lifelong work as a cartographer and geologist. Molenaar served as a photographer with the U.S. Coast Guard in the Aleutian campaign and the Western Pacific. He developed an aerial photography technique in which he took a pair of photos seconds apart, and later viewed them through a stereoscope to produce a three-dimensional view from which he drew accurate maps.

After the war he returned to Seattle to study geology at the University of Washington—where he lettered in pole-vaulting—and worked summers as a climbing guide and ranger on Mt. Rainier. Molenaar made notable climbs around the world, including the second ascent of Alaska’s Mt. St. Elias (18,008 ft) in 1946 and the first ascent of the Yukon’s Mt. Kennedy (13,944 ft) in 1965, in which he and Jim Whittaker led Sen. Robert F. Kennedy to the summit of the peak named in honor of his slain brother, President John F. Kennedy. 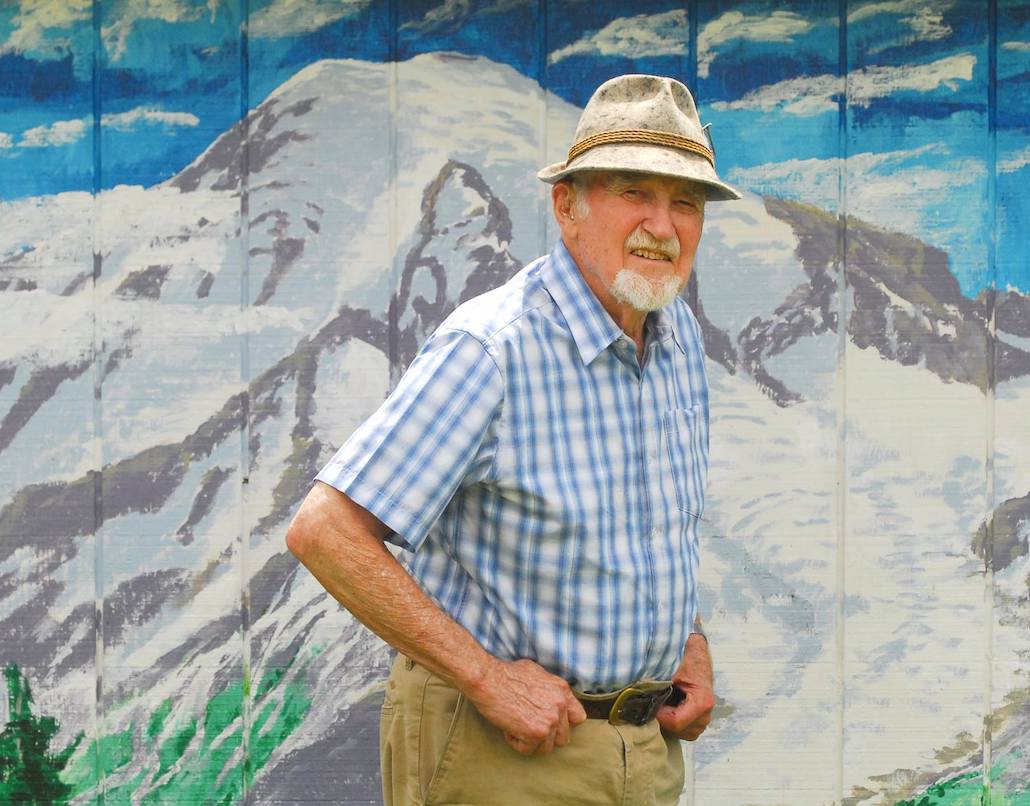 Molenaar in his trademark Alpine hat, photographed in front of the mural of Mt. Rainier he painted on his garage. Photo courtesy Mountaineers Books

Molenaar is best known for the 1953 K2 expedition and his deep connection to Mt. Rainier. He climbed the mountain more than 50 times by a dozen different routes, including three first ascents. His Challenge of Mount Rainier is the definitive climbing history of that mountain, rich with maps and illustrations. He met Colleen, his wife of 62 years in the gift shop at Mount Rainier National Park when he was a climbing ranger there in 1951.

Molenaar made a number of notable climbs on Rainier and elsewhere and was a mentor to dozens of climbers through the years, among them Jim Wickwire, one of the first two Americans to summit K2, in 1978.

“Dee is a Northwest icon who was respected and admired by other mountaineers of that era, like Tom Hornbein and Lou and Jim Whittaker,” says Mike Gauthier, who was in charge of the climbing ranger program at Rainier for nearly 20 years. “They looked up to him.”

His love of the mountain bubbled out of him, sometimes erupting in spontaneous yodels. He was a fixture on Rainier and the Northwest mountaineering community, an elfish figure, often opinionated and always playful in his demeanor, Gauthier said. “He liked being around mountain people. He was always positive, almost elfish in his demeanor—he and Colleen—they were delightful.”

Molenaar possessed a famously powerful handshake, which seemed to convey a genuine enthusiasm in greeting friends old and new. “At 99 he’d grab your hand and you’d think a lobster had grabbed you,” said Mike Gauthier.

When Everest pioneer Tom Hornbein visited Molenaar in 2018, an arm-wrestling match broke out on the kitchen table. “I’m not sure who challenged who. It just happened. There was a lot of power in that arm of his still,” Hornbein, then 87, said of Molenaar, who was two months shy of his 100th birthday. Hornbein was in town to receive a lifetime achievement award from the Seattle-based climbing club The Mountaineers, an honor Molenaar had received the previous year.

“His enthusiasm was infectious. He just cherished the mountain he knew so well and cherished sharing it,” said Hornbein. “He was an artist, geologist, writer, thinker. He knew how to communicate and share his passion.” Molenaar’s love of mountains found expression in his art and illustrated maps, one of which writer Mike Ybarra described in a delightful 2011 profile for Alpinist magazine. “His map of Mt. Rainier is painted in muted tones, a bird’s eye view of the snow-capped volcano, its ridges radiating like the arms of starfish…A series of small sketches depict flanks, glaciers, and valleys. It’s less an exercise in cartography than a hymn.”

Molenaar was also fond of giving slideshows featuring photographs and artwork of his many adventures, starting with his first attempt on Mt. Rainier in 1939. Whenever he presented it, whether to middleschoolers or gatherings of legendary mountaineers, he closed with a poem by Clark Schurman, the lead guide who hired him in 1940 and shared his abiding love of Mt. Rainier.

Last campfires never die.
And you and I, on separate ways to life’s December,
Will always dream by this last campfire,
And have this mountain to remember.