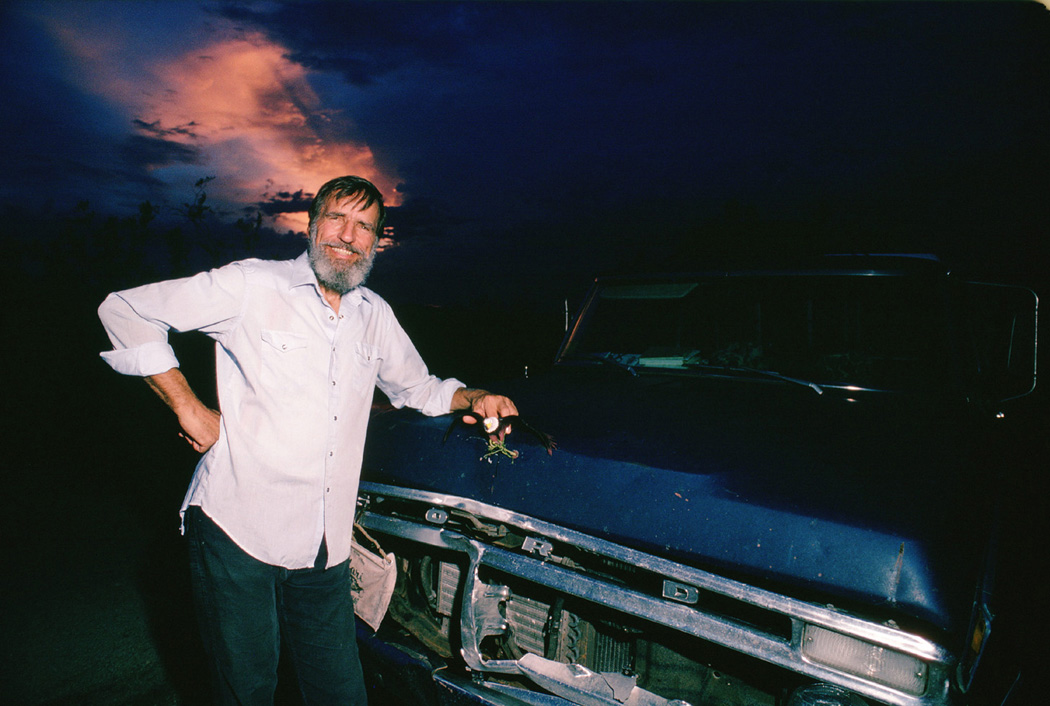 Ed Abbey died decades ago, and a couple friends carried his body out to the desert and buried it illegally, just like he wanted. It was a fitting statement for a man who spent his life loving the desert and wilderness, and raising hell about protecting it.

We love Abbey for his passion for canyon country, his cantankerous attitude, and his eternal quotability. If you’ve read his books, you’ve probably underlined a passage or twelve. You’re not the only one. We collected our favorite quotes, so put these in your pipe and smoke ’em. Cactus Ed was probably puffing on his when he came up with them. If we missed your favorite, add it in the comments.

1. “How to Overthrow the System: brew your own beer; kick in your Tee Vee; kill your own beef; build your own cabin and piss off the front porch whenever you bloody well feel like it.”

2. “The idea of wilderness needs no defense, it only needs defenders.”

3. “Life is too short for grief. Or regret. Or bullshit.”

4. “Freedom begins between the ears.”

5. “I’ve never yet read a review of one of my own books that I couldn’t have written much better myself.”

6. “Belief? What do I believe in? I believe in sun. In rock. In the dogma of the sun and the doctrine of the rock. I believe in blood, fire, woman, rivers, eagles, storm, drums, flutes, banjos, and broom-tailed horses…”

7. “In the first place you can’t see anything from a car; you’ve got to get out of the goddamned contraption and walk, better yet crawl, on hands and knees, over the sandstone and through the thornbush and cactus. When traces of blood begin to mark your trail you’ll begin to see something, maybe. Probably not.”

8. “This is the most beautiful place on Earth. There are many such places. Every man, every woman, carries in heart and mind the image of the ideal place, the right place, the one true home, known or unknown, actual or visionary.”

9. “I have been called a curmudgeon, which my obsolescent dictionary defines as a ‘surly, ill-mannered, bad-tempered fellow’. Nowadays, curmudgeon is likely to refer to anyone who hates hypocrisy, cant, sham, dogmatic ideologies, and has the nerve to point out unpleasant facts and takes the trouble to impale these sins on the skewer of humor and roast them over the fires of fact, common sense, and native intelligence. In this nation of bleating sheep and braying jackasses, it then becomes an honor to be labeled curmudgeon.”

10. “A world without open country would be universal jail.”

11. “Wilderness is not a luxury but a necessity of the human spirit, and as vital to our lives as water and good bread. A civilization which destroys what little remains of the wild, the spare, the original, is cutting itself off from its origins and betraying the principle of civilization itself.”

12. “There are some good things to be said about walking. Not many, but some. Walking takes longer, for example, than any other known form of locomotion except crawling. Thus it stretches time and prolongs life. Life is already too short to waste on speed. I have a friend who’s always in a hurry; he never gets anywhere. Walking makes the world much bigger and thus more interesting. You have time to observe the details.”

13. “If people persist in trespassing upon the grizzlies’ territory, we must accept the fact that the grizzlies, from time to time, will harvest a few trespassers.”

14. “There is no shortage of water in the desert but exactly the right amount , a perfect ratio of water to rock, water to sand, insuring that wide free open, generous spacing among plants and animals, homes and towns and cities, which makes the arid West so different from any other part of the nation. There is no lack of water here unless you try to establish a city where no city should be.”

16. “I despise my own nation most. Because I know it best. Because I still love it, suffering from Hope. For me, that’s patriotism.”

17. “Ah yes, the head is full of books. The hard part is to force them down through the bloodstream and out through the fingers.”

18. “When the situation is hopeless, there’s nothing to worry about.”

19. “I find that in contemplating the natural world my pleasure is greater if there are not too many others contemplating it with me, at the same time.”

20. “High technology has done us one great service: It has retaught us the delight of performing simple and primordial tasks – chopping wood, building a fire, drawing water from a spring.”

21. “Industrial tourism is a threat to the national parks. But the chief victims of the system are the motorized tourists. They are being robbed and robbing themselves. So long as they are unwilling to crawl out of their cars they will not discover the treasures of the national parks and will never escape the stress and turmoil of the urban-suburban complexes which they had hoped, presumably, to leave behind for a while.”

22. “Has joy any survival value in the operations of evolution? I suspect that it does; I suspect that the morose and fearful are doomed to quick extinction. Where there is no joy there can be no courage; and without courage all other virtues are useless.”

23. “There are some places so beautiful they can make a grown man break down and weep.”

When’s the last time you read yourself some Abbey? Get him here:

Desert Solitaire
The Monkeywrench Gang
Fire on the Mountain
Hayduke Lives!
The Best of Edward Abbey