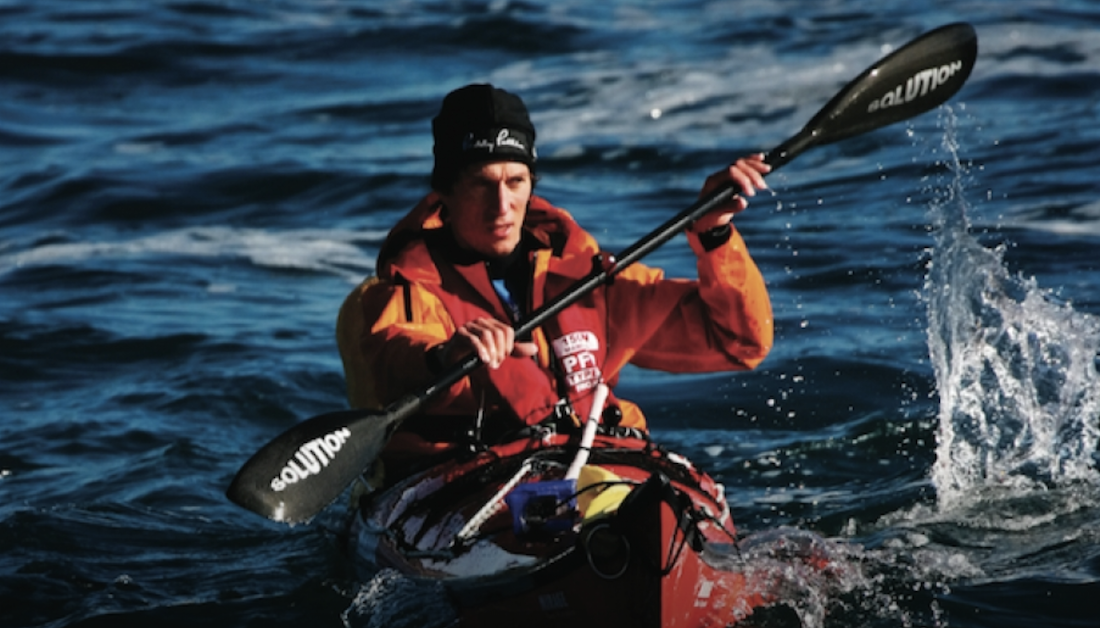 Soon after Andrew McAuley disappeared just 30 miles from the end of a 1,000-mile kayak crossing from Tasmania to New Zealand a dozen years ago, pundits began second-guessing him. Nothing could be worth such risk, they scolded, especially to a man blessed with a loving wife and young son.

McAuley, whose resumé included paddling 330 miles across Australia’s Gulf of Carpentaria and three kayak crossings from Australia to Tasmania, had planned meticulously for the trip, placing great trust in a homemade cockpit canopy designed to right his modified production kayak in the event of a capsize. The canopy, nicknamed Casper, did that job on several occasions, but McAuley’s video diary, found when the kayak was recovered without the canopy, tells of him having to climb back into the kayak after being ejected in a hard capsize. The video also reveals that McAuley had glimpsed the high mountains of New Zealand’s South Island in the last hours of his life. He’d come that close to completing one of history’s most audacious ocean crossings.

“It seems that if you live, then by definition you are a competent, risk-taking explorer. But if you die, it is too easy to call you a crazy suicidal.”

If he had managed another 30 miles we would have hailed him as a genius, kayak adventurer Jon Turk told me at the time. “It seems that if you live, then by definition you are a competent, risk-taking explorer. But if you die, it is too easy to call you a crazy suicidal,” he said.

McAuley by all accounts was a prudent adventurer, though also a driven one. He started as a rock climber and mountaineer, putting up dozens of big-wall routes in Australia and alpine first ascents in New Zealand, Patagonia and the Himalayas in the 1990s. He took little interest in the marquee peaks, preferring to test himself on lesser-known but more complex routes, such as the south ridge of Ama Dablam (6,854 meters) in Nepal and the first ascent of Mt. Jo, a rocky spire reaching 5,400 meters in Pakistan’s Nangma Valley.

Closer to home, McAuley and Vera Wong pioneered a line called Evolution in Bugonia Gorge. The route was a favorite of McAuley’s, and a fall there in 1998 launched his kayaking career, albeit indirectly. McAuley plummeted 30 meters when a handhold pulled loose, ripping two sets of protection from the rock and smashing his knee against the cliff. The impact shattered his patella, and he never fully recovered.

Earlier that year McAuley and his wife Vicki brought kayaks to Patagonia to access the Dedos del Diablo, a set of un-climbed spires on the edge of Chile’s promisingly named Fiordo de los Montañas. After his accident, McAuley took a greater interest in sea kayaking. The knee injury meant that in the mountains, McAuley would reach his physical limit well before his mental one. In the kayak, there was no such limitation.

“I’ve always been drawn to challenges at the sharp end of what is possible, initially with climbing and mountaineering, and more recently with sea kayaking,” McAuley wrote before his 2007 Tasman attempt. He planned to publish a book when he finished the crossing and had, in fact, already written a good deal of it. His wife Vicki incorporated some of his writings into her 2010 book about McAuley and his crossing, Solo.

“Ant had always said a well-built kayak is limited not by the modest dimensions of the craft, but by the imagination and skill of the person sitting in the cockpit,” she wrote. McAuley had no shortage of imagination, and his skill grew in step with his increasingly ambitious kayaking missions.

He crossed Bass Strait, the 140-mile body of water between Tasmania and the Australian mainland three times by kayak, first by island-hopping along the eastern edge of the strait, then on the west with one stop, and finally a nonstop crossing. Borrowing a climbing term, McAuley called the 35-hour epic his “Bass Strait super-direct.” Toward the end he fell asleep, capsized, and rolled up without missing a beat. Later, still miles from the finish, he called Vicki from the kayak and told her he’d arrived safely ashore. She was pregnant with their son, Finlay, and he didn’t want to worry her.

When he got home from the super-direct, he pulled out the Times Atlas of the World and a tape measure, Vicki writes in Solo.

“Have a look at this,” he beckoned. “The Gulf of Carpentaria. It’s only five centimeters on the map.”

In life, the great bay on Australia’s north coast is 330 miles across. McAuley spent nearly a week paddling across it in 2004, sleeping at sea in his sea kayak.

After that, the Tasman Sea was all that was left.

McAuley balanced fatherhood, training and work by commuting in his kayak across Sydney harbor to his job as an IT consultant. He estimated the 1,000-mile Tasman crossing would take a month, give or take. For a trip of that length in that part of the world, there’s no such thing as a weather window. His route from Tasmania to New Zealand’s South Island put him in the Roaring 40s, on the edge of the nastiest ocean in the world.

In the years before and since McAuley’s disappearance, kayakers have notched an ever-longer list of improbable ocean crossings, not to mention a catalogue of harrowing close escapes. Aleksander Doba was 70 during his third Atlantic kayak crossing in 2017. But his boat resembles a survival capsule as much as a kayak, with an enclosed cabin and elaborate self-righting mechanism. Justin Jones and James Castrission used a similar craft for the first kayak crossing of the Tasman in 2008, as did Scott Donaldson, who made the only successful solo kayak crossing in 2018.

McAuley proposed to paddle the Tasman in a production sea kayak.

The only thing remotely comparable was Ed Gillet’s 1987 crossing from Monterey, California to Hawaii in a lightly modified double kayak. Rightly heralded as the greatest sea kayak voyage of all time, Gillet’s crossing was also a succession of narrowly averted disasters. Out of food and hallucinating after 2,200 miles and 63 days at sea, he nearly missed the islands altogether.

McAuley’s route would be shorter, but the weather was potentially far worse. The biggest challenge, aside from the limits of mental and physical endurance, would be how to ride out the inevitable storms he would encounter along the way. McAuley’s answer was Casper, a fiberglass cover he planned to lock over the cockpit of his 19-foot Mirage sea kayak at night and in bad weather. It looked like an inverted trash can with a huge smiley face painted on it.

McAuley told me about Casper the one time we spoke, in December, 2006. I was hunting stories and caught wind of his, so I picked up the phone and we talked for an hour, never mind the international rates. I was working late on a winter Friday in Colorado, he was enjoying a summer Saturday morning in Australia. Still, we connected. We’re the same age and had both spent our lives chasing adventure—me with a camera and notepad writing modern myths in the third person, him out there, living them. 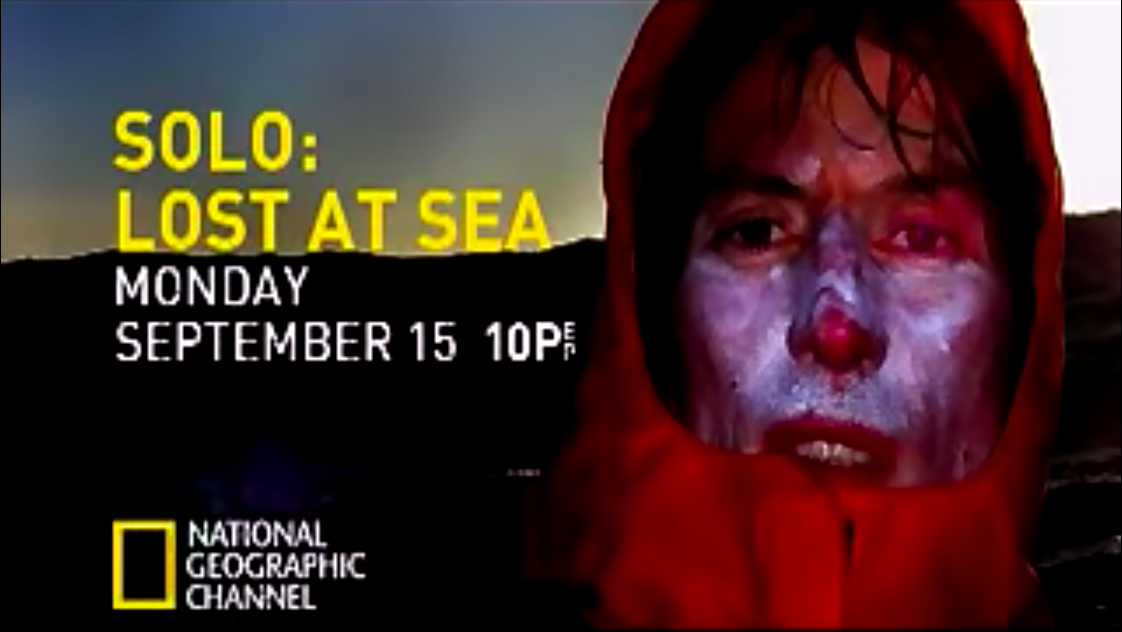 I asked the usual goading questions, looking for something to hype. Do you worry about the danger? I asked, or the high winds, the cold seas, being alone? And that’s when he told me about Casper. He would clamp that fiberglass emoticon over his cockpit and trust it to keep him upright and dry, 500 miles from the nearest land. When he told me he’d built it “out in the back shed,” I thought there’s a quote I can build a story on. So Australian. So perfectly telling of his approach.

I told my editors his was the kayaking story of the year, always slipping in the caveat, “if he makes it.” By which I meant if he didn’t quit. I should have known better.

The heavy weather came in earnest when McAuley was about two-thirds of the way across the Tasman, bringing 30-foot seas and 40-knot winds. He had decided in advance not to request help in such conditions. Locked in the kayak under his smiling yellow dome, McAuley had in his hand a beacon that would automatically trigger a rescue. He didn’t use it.

“Andrew spent 28 hours locked up in his kayak with the beacon right there,” his weather-router Jonathan Borgais told The Age. “He would have rolled several times. He had the nerve all that time not to activate the beacon, but kept sending me messages.” One read, “No picnic today.”

Twelve days later, with just 80 miles to go to Milford Sound on New Zealand’s South Island, he messaged Vicki: “See you 9 a.m. Sunday!” It was Thursday. The weather forecast promised a quiet end to a harrowing journey. Vicki was already waiting in Milford Sound with Finlay and a cadre of well-wishers, including the legendary Kiwi kayaker Paul Caffyn who planned to paddle out and meet McAuley with ginger beer and a bottle of whiskey.

The next evening, the New Zealand Coast Guard received a garbled distress call. It was McAuley, reporting that his kayak was sinking, 30 miles from Milford Sound. In the recording, his voice is almost unintelligible. He sounds deeply fatigued, or perhaps hypothermic. Some thought the message a hoax. A small search was launched that night and expanded the following day. The kayak was recovered about 24 hours after McAuley’s last transmission. It was missing only the cockpit canopy. The paddle, satellite phone, GPS, and beacon—still not not activated—were all in working order inside the kayak. McAuley was never found.

No one knows what happened in his last hours. The prevailing theory is that kayak capsized and McAuley became separated from it. With Casper stowed on the rear deck, the boat was impossible to roll, and climbing back in was a sketchy prospect in the best of conditions. McAuley had performed the maneuver twice during his crossing, and reported it had been ‘gnarly’ both times. In his fatigue it’s possible he couldn’t get back in the boat. Or it may have simply slipped from his grasp. Even in light winds, a kayak will drift faster than a man can swim.

In the days after McAuley’s death, a photograph of his boat made the rounds. Taped in front of the cockpit was a snapshot of McAuley’s son. The image took me back to the conversation we’d had a couple of months before, and how I’d been so taken with McAuley’s can-do attitude. Even his motivation was improvised, I thought: that photo of 3-year-old Finlay stuck to the front deck of his kayak. Something to keep him going through the capsizes, the 30-foot seas and the 40-knot gales and, I can’t stop myself from thinking, the last thing he saw as the kayak slipped away. How long did he swim in that cold, empty sea, knowing that beautiful child was waiting on the other side?