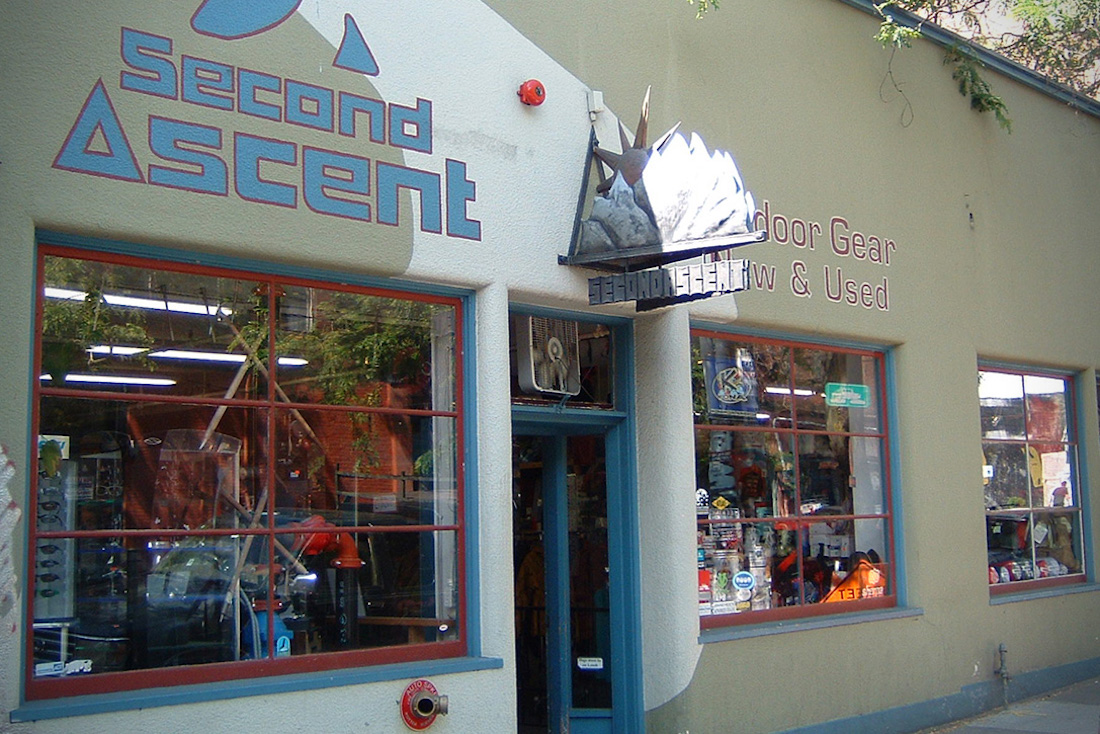 Last week I read about the closing of Ascent Outdoors, a mom-and-pop gear store in Seattle that had been in business for over 20 years and had just opened a third location. I’d been there once, years ago while in town scoping the University of Washington on a grad school visit. Stopped in (it may have been called “Second Ascent” back then) poked around the gear, bought a lightweight rain shell—yeah, went to Seattle without one—and enjoyed the experience. Staff was friendly, a good vibe among the people in the store. I liked it immediately.

Reading about the closure of Ascent Outdoors bummed me out, even though I don’t live anywhere near Seattle. It reminded me of my favorite hometown gear shop, one that, like Ascent Outdoors, fell victim to changing buying habits of the outdoor community and closed its doors forever.

I miss feeling at home in a dark and mysterious gear shop, turning when the bells clanged at the door to see who was coming in, maybe a familiar face, maybe a crusty old-timer about to spin up a yarn about where they’d just been.

It was on a busy thoroughfare in San Luis Obispo, California, occupying a squat, rectangular building with a brick facade in the front, yellow plaster walls, and a green awning with gold lettering that read: Granite Stairway. The sort of building that looked like it had once been a ho-hum insurance office. Bland. Forgettable. Except for the illustration of a hiker on the side, striding confidently up a mountain somewhere. Plus, the name Granite Stairway is a poetic kind of call-to-action. Long before I ever shopped there I’d drive past that building and look at the stenciled hiker with a bit of longing; the store beckoned, despite the dark windows you couldn’t see through. What was going on in there, I’d wonder.

Finally, one summer while in college, I got a seasonal job working for the National Park Service in Sequoia/Kings Canyon National Park. I knew I needed some serious advice about real-deal boots and gear that would keep me comfortable and safe over months in the backcountry. Plus, I had a small gear stipend. So, after years of being vaguely intimidated, I walked to the storefront, grabbed the door handle and pulled.

Bells charmingly clacked and rung against the glass.

A man who was the spitting image of the late Steve Irwin looked up from behind a glass counter filled with pocketknives and multitools. He put down the copy of the local small-town newspaper he was reading (back when that was just a normal part of life and not a charming relic) and smiled. Behind him were cubbyholes stuffed with rolled-up topo maps. Twisted braids of colorful climbing ropes decorated the walls and ceiling. Instantly, I felt at home. 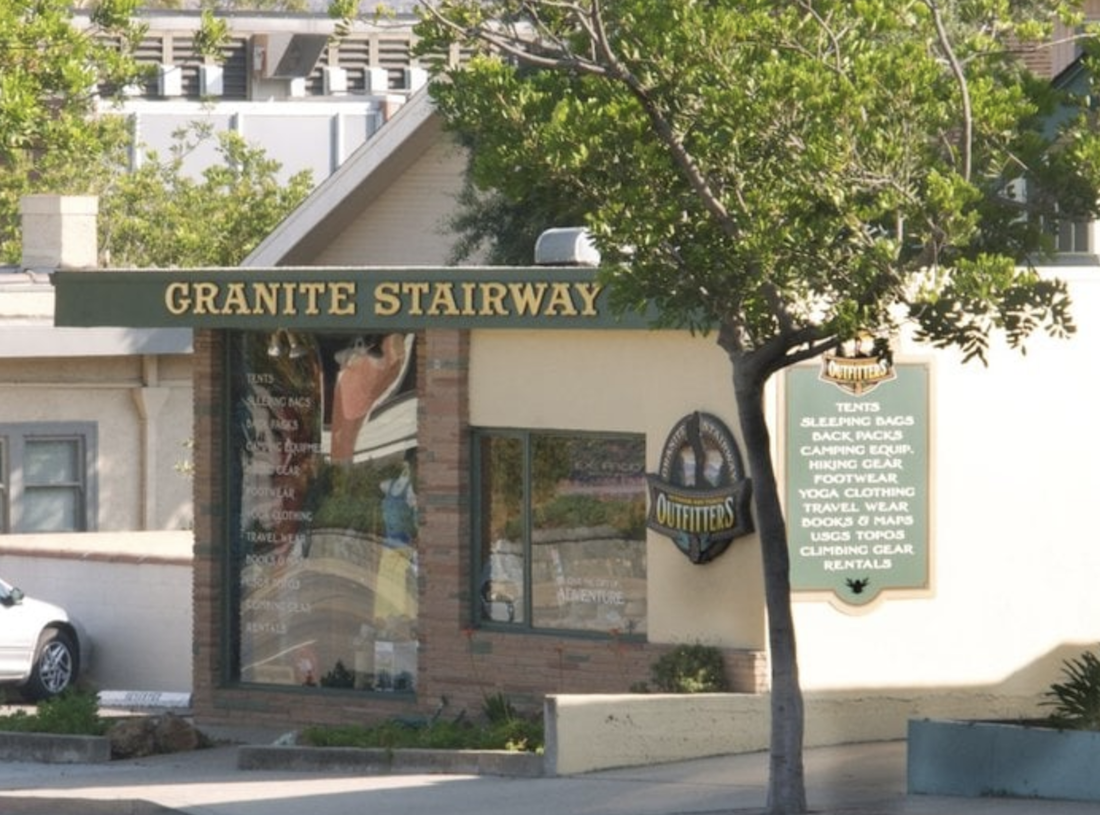 This is after a refresh, in the mid-00s.

Steve (not his real name) and I chatted about where I was going that summer, what I expected to encounter, and what I wanted to see and do. He walked me through the strengths and weaknesses of the boots, packs, and sleeping bags on offer, bypassing the most expensive pieces that, frankly, I would have purchased had he told me to, so enthralled was I by his expertise and his obvious love of good gear, or, rather, the experiences good gear would help facilitate.

Eventually, I left with a pair of Asolo FSN GTX boots (they lasted me almost 15 years; good job, Steve!), a Sierra Designs synthetic sleeping bag (presumably still in the desert in Mexico somewhere, a long story), and a Lowe Alpine backpack (this served me well for well over a decade, backpacking the Sierra, and trips through Europe, until I sold it on Craigslist to a young man about to take his first backpacking trip a couple years ago).

Steve tossed in a pair of wool socks for free, showed me how to stuff my bag in the pack without a stuff sack to save space, and sent me on my way, returning to his newspaper. He seemed every bit the knowledgable craftsman a good car mechanic is. Proud of his work.

Once the summer ended, I returned often to the shop, to peruse new gear I couldn’t afford, and eavesdrop on old timers telling stories about Sierra and Trinity Alps backpacking missions, as well as climbers gearing up to take on the nearby crags that were growing increasingly popular. I’d buy a Nalgene bottle sometimes, a baselayer occasionally, topo maps, and lots of freeze-dried meals. It felt like my local surf shop. A place to hang, even when I wasn’t in the mood or the financial place (I was in college) to buy a whole lot.

I moved to San Francisco after undergrad and tried to find my Granite Stairway here. Eventually, I settled on a behemoth store called The Sports Basement that has a similar scruffy vibe, but it’s too big to feel intimate. These days, when I’m headed out to the backcountry, SB, as I call it, is a must-stop for fuel, food, last-minute bug repellant, paper topo maps. But I don’t know anybody who works there, and, frankly, it’s clear most people on the floor don’t have the knowledge and professionalism of Steve.

On a trip back home to SLO a few years after I had moved, I was dismayed to see that Granite Stairway had closed. SLO still to this day has a small gear store, The Mountain Air, long may it live (amazing that a town of 40,000 people 4 hours from the mountains supported two small outdoor gear shops) But it wasn’t MY store the way Granite Stairway was.

Nostalgia? Oh hell yes. I could be remembering most of this wrong. The past is murky, especially tinged with the golden fog of pleasant memories. But when I read about the closure of Ascent Outdoors, I couldn’t help but feel a pang of sadness for Granite Stairway and Steve wash over me. I too, buy many things online, outdoor gear included. I’m a proud member of REI. I’ve eaten lustily from the tree of discount forbidden fruit. And I know enough about outdoor gear now to not really need the expertise of a Steve anymore. Heck I might even be somebody’s online Steve.

But, man, I really miss that store. I miss that third place of mine. I miss feeling at home in a dark and mysterious gear shop, turning when the bells clanged at the door to see who was coming in, maybe a familiar face, maybe a crusty old-timer about to spin up a yarn about where they’d just been. Haven’t found that yet anywhere else.