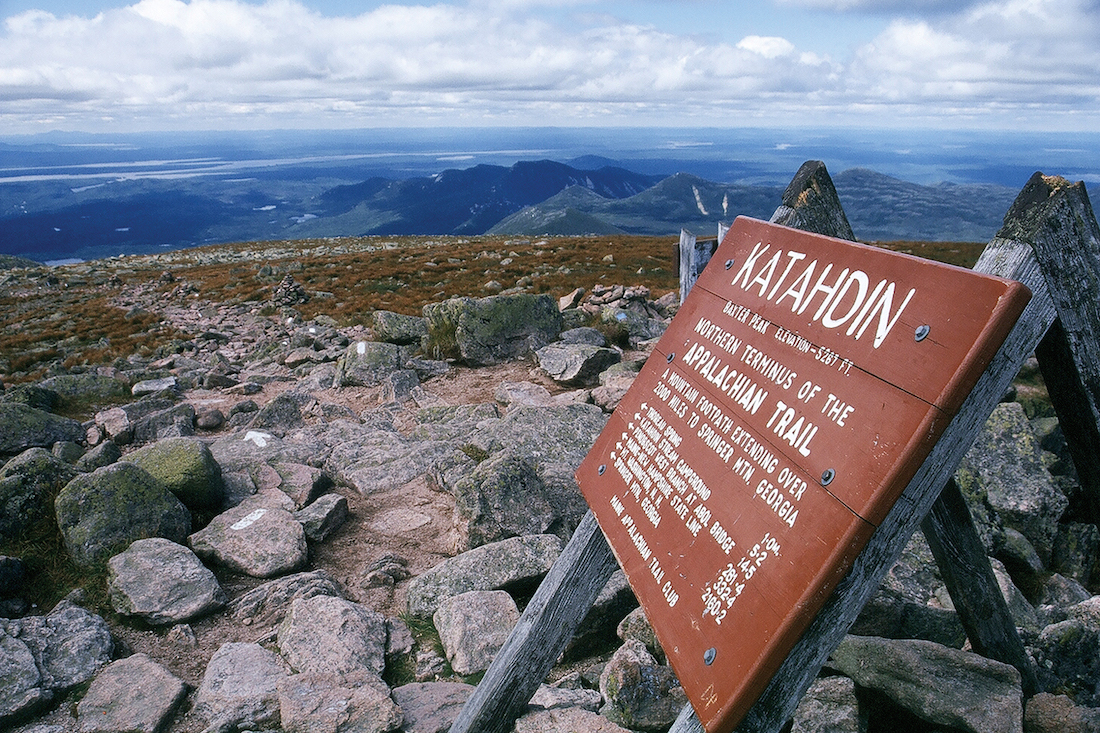 Gary Paulsen’s book Hatchet, about a kid who survives an airplane crash deep in the woods and has to survive on his own in the wilderness deeply affected thousands of adolescents when the book was published in 1987. Kids everywhere would think about Brian, Hatchet’s quick-witted protagonist, as they set out for backcountry hikes, wondering what they would do if they found themselves alone, lost for days or weeks in the wilderness, nobody to rely on but themselves.

The book wasn’t based on his actual experiences, but a 12-year-old Donn Fendler knew just what that felt like when he spent nearly two weeks lost in the woods of Maine in 1939. His disappearance captivated the nation, as did the story of his miraculous survival. The New York Times covered his plight. A parade was held in his honor. FDR even gave Donn the Army and Navy Legion of Valor medal for his bravery.

Fendler became lost while hiking the Katahdin Hunt trail, the end section of the newly opened Appalachian Trail. Donn was with his father, brothers, and an older friend, trying to gain Katahdin’s peak. Donn pushed ahead toward the summit, but turned back cold and wet in a drenching fog, assuming he’d rejoin his brothers along the trail. Disoriented in the poor visibility, he couldn’t locate anybody and soon lost the trail altogether. He was alone, cold, without food, and only 12-years-old.

At one point, a small pair of footprints were discovered that led directly to the lip of an overhanging cliff that plunged hundreds of feet to the rocks below. It appeared as though somebody Donn’s size had walked right off the cliff to their doom.

Fortunately, Fendler was also a Boy Scout and had some backcountry experience. He decided to spend a night in the crook of a large tree, then try find the trail in the morning. He was determined not to let panic overtake his thought process. “First thing, I must keep my head, then, maybe, if I looked close, I could find a trail,” he later said. The next day, Donn’s luck finding the path out proved no better, so he started walking along the banks of a stream, assuming it would flow downward toward help, civilization, something. He kept walking for nine days.

Meanwhile, search and rescue operations were combing Mt. Katahdin. Dogs sniffed the underbrush, Boy Scout volunteers searched just off the trails, employees at a nearby paper mill, familiar with the environs, poked into hidden spaces.

At one point, a small pair of footprints were discovered that led directly to the lip of an overhanging cliff that plunged hundreds of feet to the rocks below. It appeared as though somebody Donn’s size had walked right off the cliff to their doom. Still, the search continued.

Fendler was quickly losing weight and most of his clothes. He took his shoes off to wade through a creek and lost them. To keep his pants as dry as he could, he took those off only to watch them be carried downstream. For food, he tried to eat berries when he could, at one point, however, he encountered black bears dining at the same bushes he targeted. Donn moved on. 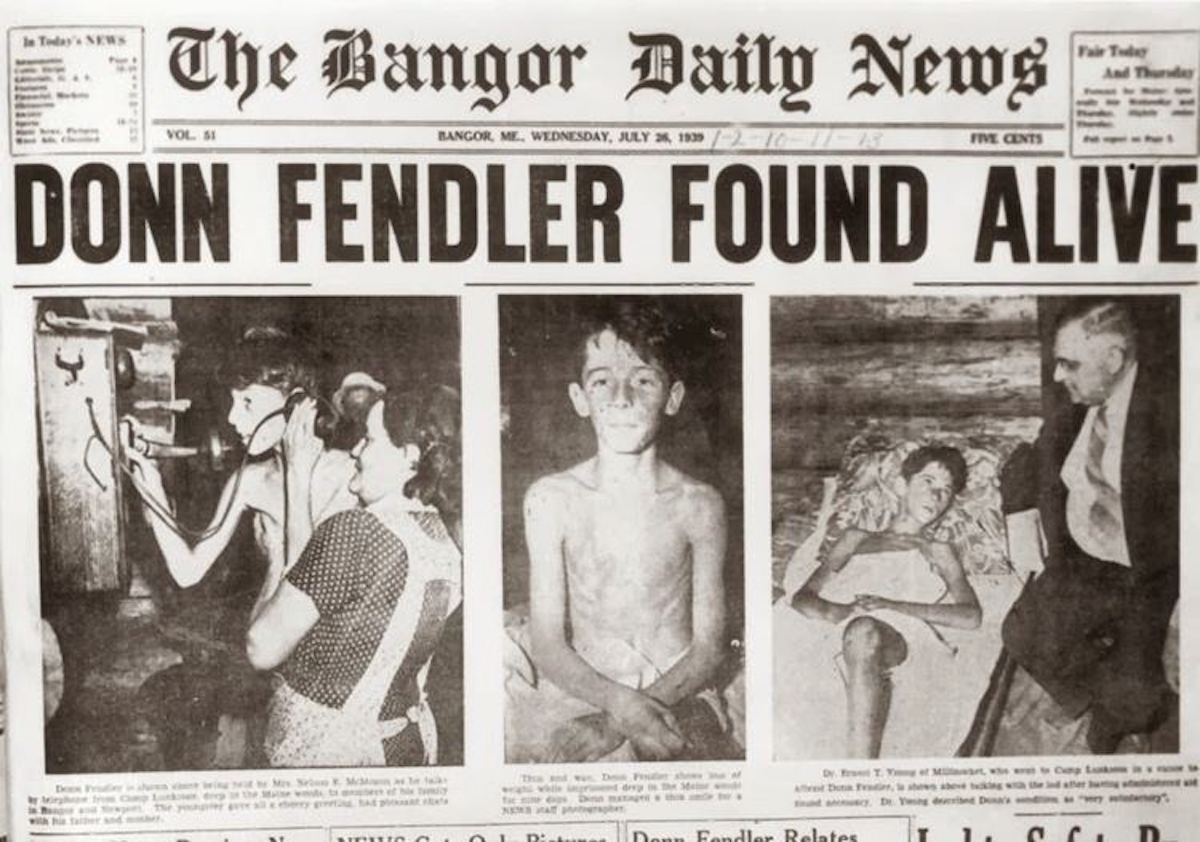 Temps at night were practically freezing and Donn had no pants and no shoes. Black flies and mosquitos plagued him constantly, crawling into his eyes and ears, driving him nearly mad. “Somebody ought to do something about those black flies,” an adult Fendler said in Lost on a Mountain in Maine, a book about his ordeal published in 1978. “They’re terrible — around your forehead, under your hair, in your eyebrows and in the corners of your eyes and in the corners of your mouth, and they get up your nose like dust and make you sneeze, and you keep digging them out of your ears.”

Eventually, Donn stumbled across an abandoned cabin where he found a potato sack he could use for a bit of warmth, but no food. Five days into his wandering, people back home had given up hope. His mother received telegrams from people expressing their concern, sharing their prayers, sending comforting words.

Nine days after he vanished into the fog, Donn, continuing to follow that stream down the mountain, walked nearly naked and starving into the arms of a couple staying at a cabin next to a lake some 35 miles from where he had parted from his family. He’d lost 16 pounds. The couple was able to get Donn’s mother on the phone and relayed the good news: he’d survived, no worse for the wear, save some severe hunger and exhaustion, and suffering thousands of bug bites.

Donn spent a few days in the hospital, then returned to his Rye, New York, home, to resume the life of a 12-year-old, albeit one who now had some notoriety. His town turned out for a small parade. The New York Times ran the story of his experience on the front page. Then, the next year, the president came calling. Donn was honored as the young hero of the year.

Years later, Fendler became a Green Beret, perhaps toughened by his experience on the mountain. Lost on a Mountain in Maine was required reading for Maine schoolchildren for decades. Fendler, who passed away in 2016 at age 90, wanted his ashes spread on Katahdin. “My brother said he’d fly [over the mountain] or get someone to fly,” he told the Bangor Daily News. “Yup, they’re going to put me in a bean can.”

To read more about Fendler’s experiences, get Lost on a Mountain in Maine here.