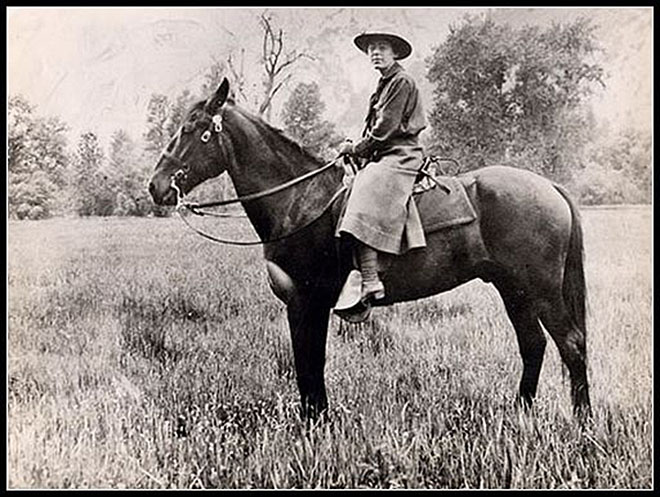 In the summer of 1918, toward the end of World War I, pickings were slim for able-bodied, non-deployed men to fill manual labor jobs. Women were tapped to work as police officers and factory workers. In California, Yosemite National Park needed rangers.

So Clare Marie Hodges, who taught at the nearby Yosemite Valley School, went to the park superintendent Washington B. Lewis to apply for a job.

Lewis, who was either an ahead-of-his-time feminist or desperate for bodies, wasn’t laughing. “I beat you to it, young lady. It’s been on my mind for some time to put a woman on one of these patrols,” he told her.

Hodges spent the summer on mounted patrol, riding overnight on horseback between Tuolumne Meadows and the park headquarters. The other rangers told her she should carry a gun, to ward off animals and attackers, but she decided against it. She received a uniform Stetson, but still rode in a split skirt, occasionally confusing the people she encountered who didn’t understand why a woman had a ranger’s badge.

Hodges, who grew up in Santa Cruz, first came to Yosemite when she was 14, on a four-day horseback ride. She fell in love with the valley and came back in 1916 to work at the school. By the time she started working in the park she said she had two years of pre-employment training and that she had already knew the park by heart.

She was the only fully commissioned female park ranger for the next 30 years. Another woman, Helene Wilson, was hired to collect fees at Mt. Rainier that summer. And after the war, more women started working in the parks, but for a long time they were relegated to jobs like waitressing. Female park employees weren’t allowed to wear the same uniforms as men until the 1970s – they wore pillbox hats and dresses modeled after flight attendant’s uniforms – and even now, only about a third of park employees are women. Isabelle Bassett, the second female park ranger, who worked in Yellowstone in 1920, became quickly disillusioned with her role.

“I didn’t range, I talked,” she wrote to her classmates at Wellesley College in Massachusetts.

Hodges ranged, and she had the same role and responsibilities as the men she worked with, gun or no gun.

After her stint as a ranger she stayed in the Yosemite area, ranching and guiding church groups with her husband, Peter J. Wolfsen. She and Wolfsen were integral enough in the local outdoor community that years after their deaths, Mariposa County named a trail after them.