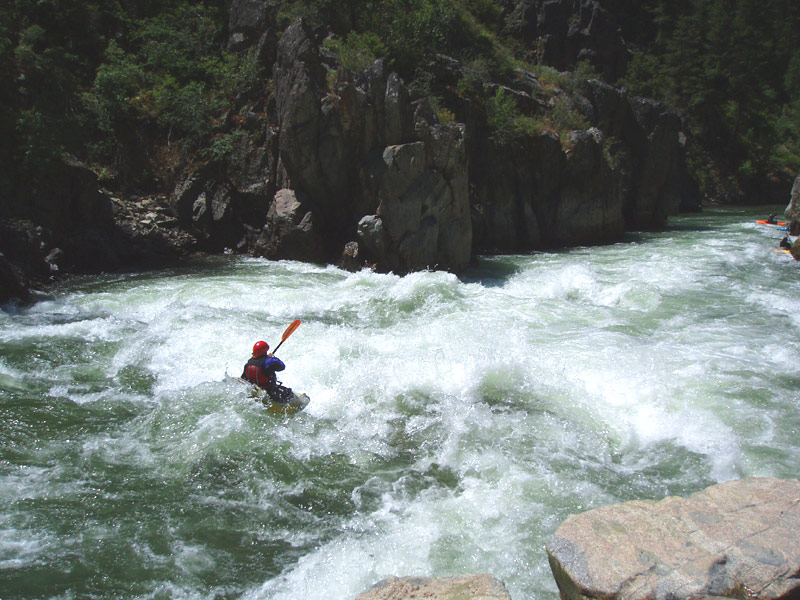 In 1970, Walt Blackadar opened the pages of Alaska magazine and stared wide-eyed at a photo of a massive, glaciated mountain towering over the Alsek River, a silt-filled maelstrom of icebergs and whitewater. Less than 15 years later, that mountain would bear his name and the small town doctor and legendary whitewater kayaker would be dead.

Blackadar first kayaked in 1965. He was in his mid-forties, and over the next decade he pushed the boundaries of whitewater kayaking more than any of his contemporaries. Blackadar eschewed the typical slalom races that represented the professional and (publicly understood) state of kayaking. Instead he pinned his skills against America’s whitewater rivers. And for Blackadar, bigger was better.

His brash, at times arrogant, attitude defined his life and his impact on the nascent sport. Beloved by many, treated suspiciously by some, Blackadar was a force in the whitewater kayaking community. The Grand Canyon, the Middle Fork of the Salmon, the South Fork of the Flathead, the South Fork of the Payette, the Bruneau and the Jarbridge, Blackadar ran them all (many for the first time) in his fragile fiberglass kayaks, torpedoing from rapid to rapid, roll to roll. His trips often included long, dramatic swims and harrowing near-death experiences. But time after time, he slipped past the brink and returned home to his medical practice in Salmon, Idaho.

His 1971 solo trip on the Alsek ultimately marked the zenith of his kayaking career, earning him a cover story in Sports Illustrated. The expedition combined huge whitewater with some of the most remote wilderness on earth, a trip model that is emulated by today’s top kayakers. Always keen for the spotlight, he leveraged the Alsek trip’s national attention into episodes on ABC’s The American Sportsman and even a feature movie.

Walt Blackadar’s life took a dark turn when a Julie Wilson, a young woman kayaking with him on the West Fork of the Bruneau, tragically drowned in 1974 after being swept over a set of unrunnable falls. Devastated and depressed, he nearly quit paddling altogether. But the lure of the camera proved too seductive for the attention-loving doctor and just a few months later, he led a hand-selected group down some of the Grand Canyon’s biggest water with an ABC crew in tow.

He returned to Alaska several times, running rivers on the Kenai Peninsula and making several attempts on the Susitna River’s infamous Devils Canyon Rapids, once with the ABC team filming as he and his partners attempted the first clean run of this notorious section of water.

Blackadar’s life offers all the drama of a classic hero story: hubris, failure, redemption, comedy, triumph, and tragedy. In fact, much of it reads like a novel. He twice smuggled a handgun into Canada, once in a special compartment a friend fiberglassed into his kayak, once in a fake book along with a bag of marijuana. He plucked Evel Knievel (of whom he was a huge fan) out of the Snake River during Knievel’s failed 1974 Hells Canyon sky-rocket jump. He alienated many of his patients in timber-dependent Salmon for his increasingly strident environmental views, ultimately helping to mobilize the whitewater community to support the Frank Church-River of No Return Wilderness legislation, which passed after his death. And through it all, he was also a competent doctor and surgeon who saved lives and relieved suffering for nearly three decades.

In the end, his brief kayaking career overshadowed his entire life. In less than five years, he went from learning his roll to fundamentally changing how the paddling community and the country at large understood what was possible in a kayak. His paddling skills never matched those of his peers, but his powerful physical strength and his equally powerful personality made him one of the sport’s most dominating figures until his sudden death.

Blackadar helped define how an outdoor hero could act for a generation of kayakers and other outdoor enthusiasts. Swaggering, boastful, and hard partying, Blackadar truly loved wild places and epic adventure and joyfully pitted his skills and bravery against nature’s most violent landscapes for fun. But he also had a darker side and failed to learn that determination and willingness can’t substitute for skill and fitness forever. When he died at age 56 on an early season run of the South Fork of the Payette where he got pinned under a log, he was overweight and underprepared.

Whatever one thinks of Blackadar today, his imprint on kayaking, and gravity sports generally, remains undeniable. His story flows as dramatically and as fast as the raging whitewater he loved to run.