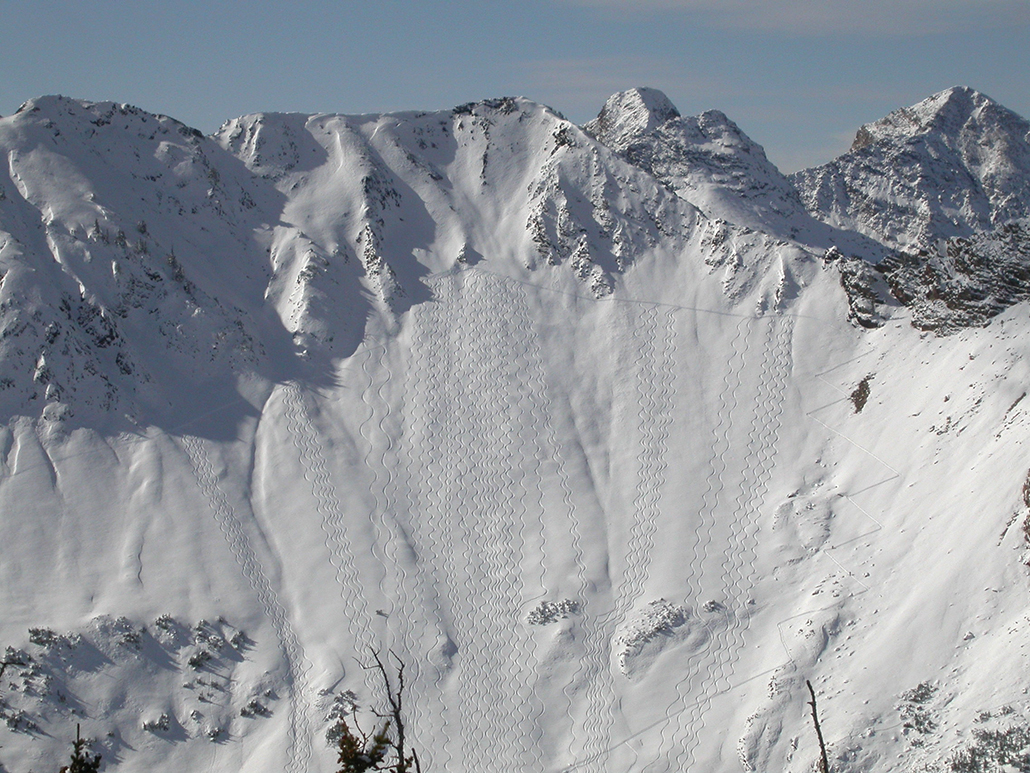 1. Half Lapping
It’s one thing to break trail up the side of a big beautiful bowl and look back to see multiple groups coming up behind you. It is a totally different story, however, to see people making it halfway up the climb, ripping their skins and snagging first half-tracks. Totally lame.

2. Ass Camping
Backcountry skiing is not a peloton in the Tour de France and 2mm does not count as “spacing out.” Trailbreaking is hard work and one of the only things that makes it even harder is to have someone climbing up the back of your skis from behind, tailgating and insisting that “you are doing a great job!”

Remedy: One touch and you are out, as in out front breaking trail. This is a very effective, almost wordless way to get people to spread out.

3. The Hidden Agenda
Words you dread to hear as you are heading out on a clear, sunny, deep, beautiful day: “I don’t care where we go, but I have to be back at the car by 1:00.” This either greatly curtails the day’s plans, adds new human factors to the tour, or means the Agenda Person has to ski out on his/her own.

Remedy: Communicate before committing to the tour.

4. The Mystery Guest
A variation on the classic ski theme “just because I slept with you, doesn’t mean I’ll ski with you.” Uninvited mystery guests of dubious abilities are the responsibility of the invitee.

Remedy: “Okay, just in case we get separated today, are you two all set?”

5. Clueless Avalanche Expert
Or, “All I Ever Needed to Know About Avalanches I learned on Internet Forums.” Getting a Q2 ECT 8 on the MLK TG layer at 8k N/NE sounds very impressive, but really doesn’t mean shit in the grand scheme of things and is NOT a good reason to ski a slope.

Remedy: Beware of blowhards who insist a slope is safe. Call your own shots.

Remedy: Break your own.

7. Phone Phreaks
Twitter, Strava, Instagram, Facebook, Jimmy is in Silver Fork, the LCC road is closed, the LCC road is now open, do you have reception?, check out this video, dogs eating at a table, New Hampshire is getting 3″, there’s an app for that, SELFIE!

8. Aborted Passers
You know the dude (and it is always a dude) – they come charging up from behind with headphones blaring and instead of offering to help break trail, they swing wide, grunt, “Hey…nice day.” and then proceed to get ground to a crawl and eat shit on the trail breaking.

Remedy: Hang back 50 feet, let him flame out and then poach his line. Have a nice day!

9. Crowding at Transitions
The mountains are big places and there is no reason to stack up on top of each other at transitions. Kindergarten kids refer to it as “being in my bubble” and for backcountry skiing, the bubble is about a five-foot radius of skin ripping, pack opening, and general maneuvering. If you get your eye taken out by a skin clip, it is really your own fault.

Remedy: The obvious – spread out.

10. Postholing the Skin Track
No list would be complete without this as booting a skin track completely ruins it for everyone (except booters…) who follows. This is actually not as common as it used to be and nowadays is mainly a frontcountry phenomenon.

Remedy: Nothing. Postholers are their own worst enemies. Pity the poor fools.