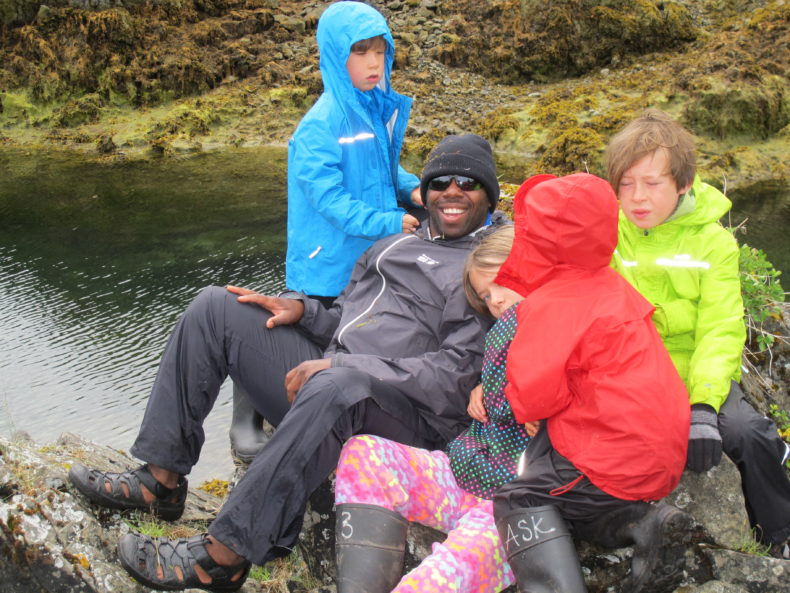 I was with a group kayaking and camping on the coast of south-central Alaska–seven adults, five kids from four years old to twelve. One of the adults was a muscular late-20s man named Everett, a friend who came along to get out of the city for an adventure. A street cop from Aurora, Colorado, Everett quickly became the favorite of the children. They hung on his arms, begging for a lift or a twirl.

Everett wouldn’t tell them he was a cop. He kept his work a secret.

Called uncle by the kids, he was soon the group storyteller. For hours they gathered all over him as he spun story after story to their breathless anticipation. He became our babysitter. The rest of the adults were free to hike or start food cooking in our mobile kitchen, while Everett picked a rock outcrop near the water’s edge and kids crawled onto him as if he were a bean bag.

Everett happened to be working the intersection in front of the Century 16 Theater in Aurora the night of July 20, 2012. He was the first law enforcement on the scene of a shooting that left 12 dead and 70 injured. He had run into the thick of it, blood and smoke, the movie playing at full volume, the killer still present.

He didn’t tell the kids this either.

The stories Everett relayed to them were his own creatively imagined renditions of Christopher Nolan’s Batman trilogy. He made each of the kids into the characters and spun narratives he’d picked up from the movies. They were about the triumph of good over evil, and how hard it might be sometimes to tell the two apart. His heroes were rugged and damaged. The bad guys paid in the end, but so did the good guys. No one came out unscathed.

I’d never seen such devotion. Every day the kids couldn’t wait for the next installment. When they gathered on him, he looked like the classic Pueblo story-teller figurines, fired ceramic effigies of someone with a mouth open as if singing, smaller children collected all over him or her. These figurines represent passing on lessons of survival, an elder sending wisdom down the line.

The movie that had been playing that night in Aurora was a midnight screening of The Dark Knight Rises, one of Nolan’s Batman movies. I never asked Everett about his choice in stories to tell the kids. That was his business. Perhaps they were so drawn to him because of his investment, not just spinning tales off the top of his head, but bringing them up from his soul. Maybe it was the real and epic quality, the elements of Joseph Campbell’s mono-myth, the hero’s journey, that seeped in as if from a collective unconscious. He had his own wrestling to do. Everett was the hero he told them about, tortured and paying for the malevolent deeds of others. He was searching for his own redemption, still looking for a way out of the cave of that movie theater. He shaped the stories how the children wanted to hear them as they absentmindedly gripped his arms or stuffed moss into his shoes. Sometimes when he finished at the edge of the water, fog hanging over the remote bays and islands around us, he looked like a scarecrow. As he stood, the children tried to hold him down like anchors. They always wanted more.

In a 2014 paper in Basic and Applied Social Psychology, researchers found that reading a narrative increases empathy toward people initially perceived as outsiders. In this way, storytelling tightens the weave of social fabric, bringing in lessons as if by proxy. If we’d been a tribe, Everett’s stories would have held us together. Maybe we were a tribe, not just us in the wilderness, but the larger world the kids would continue to engage with after the trip was done.

When the kids were away, Everett wanted to tell me about his experience that night at the theater. Whenever he came close to the subject, he withdrew. It was still so fresh, and he was under a gag order from the courts.

One night when the kids were in their tents asleep, Everett and I drank whiskey. We leaned into each other, putting our arms around each others shoulders. We were sitting on a glacier-scoured bulb of bedrock, which he and I later dubbed the Talking Rock. He told me everything about that night at the theater, none of it for me to convey to you here. His eyes were aflame as he went through detail after detail. I suppose he was telling me the same story that he gave to the kids, only it had no filter and was not meant to entertain. He was pulling the plug and letting it drain out raw.

As if he had nothing left, Everett finally collapsed. Maybe it was the whiskey, maybe he had emptied himself. In the perpetual dusk of an Alaskan midnight, a few of us carried him to his tent and slipped him into his sleeping bag as he kept mumbling, the last bits of story leaving his mouth.