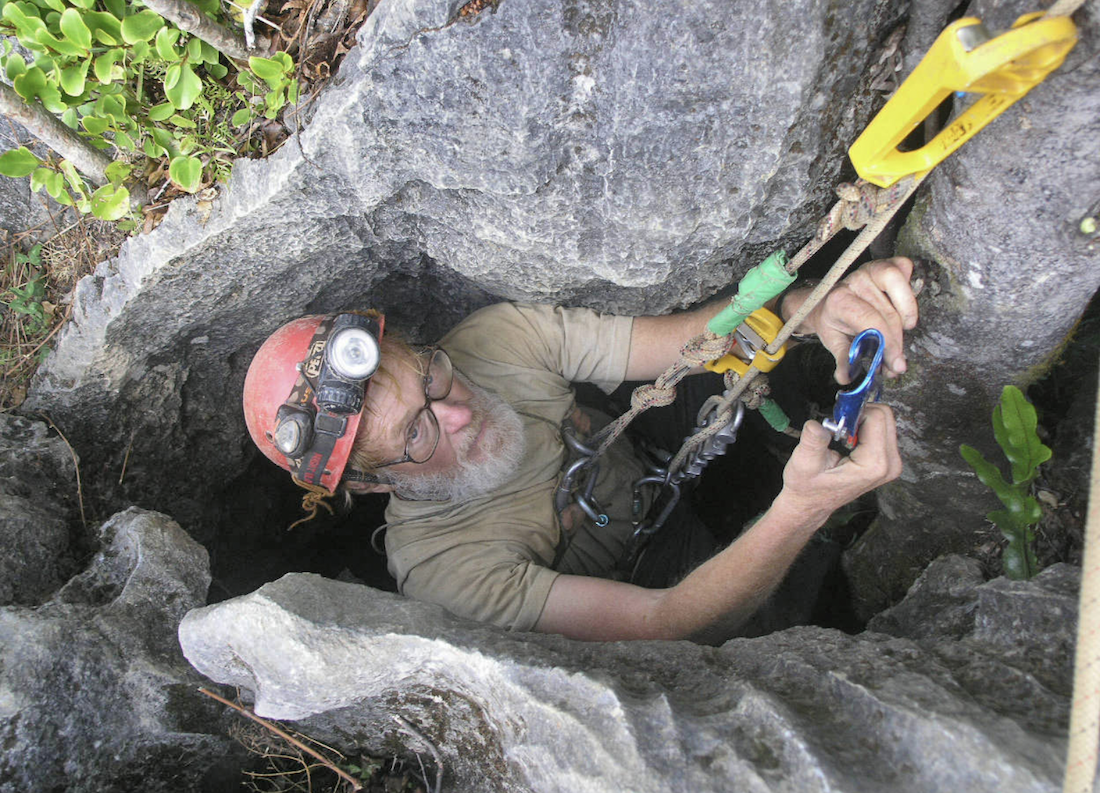 Think you know what’s beneath your feet? Well, sure, depending on where you’re reading this, could be hardwood flooring. Maybe carpet. The roadway beneath a bus you’re in, the grass under your feet in a park. But what about below that? Below the surface soil and the bedrock. Know what’s down there? Our understanding of the space around us is generally pretty limited to everything above the ground we’re standing on. But that’s only half of the picture. There is a entirely different world right beneath our feet.

This was the world explored by Marion Smith, a cave-obsessed explorer unlike any the world has ever seen. Nobody, that we know of anyway, has explored as much of the subterranean. Between 1966, when he first stooped into a cave entrance and caught that unique scent of dank, mineral earth and rock and water, and his death at age 80, he made 8,291 separate explorations. He ascended and descended over 2 million feet of rope.

“If caving were a professional sport,” said a Sports Illustrated profile in 2003, “Smith would possess the lifetime stats of a Wilt Chamberlain or Ted Williams.”

Ever been hiking in the Tennessee area? Maybe as you were strolling along a lush piece of single track, Smith was in a limestone passage dozens or hundreds of feet below, bashing his shins into slimy rock, gashing his elbows on mineral deposits, wandering by headlamp, searching for the next great cathedral of stone.

Born in Fairburn, Georgia, in 1942, Smith spent the bulk of his adult life enthralled with caves. He studied history in college which landed him a job editing the papers of President Andrew Johnson, the only profession he ever had. The rest of the time, like any self-respecting adventure addict, he worked odd jobs to pay the bills so he could spend as much time as possible underground. Later in life he leaned on his training in history to write biographies of Civil War soldiers whose names he discovered scratched into cave walls throughout the South, but that was a personal project, not a career. Smith also became an expert on the history of cave mining, in particular saltpeter, also known as potassium nitrate, a key ingredient in gunpowder.

But mostly, he caved. Smith was seemingly built for it. Wiry, strong, with a white beard and reddish-white tufts of hair peeking from beneath a battered helmet, unfazed by cold or the constant bruising and scraping endured when clambering through tight passages of rock in the dark, Smith was exactly the sort of figure you’d expect to see emerging from the mouth of a backwoods cave, filthy, blinking at the sudden midday sun.

Marion Smith, a relentless, irascible subterranean explorer who was believed to have visited more caves than anyone else in human history, died on Nov. 30. He was 80. https://t.co/rp46almbZc

Smith also possessed the rare combination of physical and mental endurance that allows a person to truly master a difficult task. His personal record for days spent exploring caves in a single year was 335. He was 71 years old when he managed that feat.

Caving can be a secretive pursuit, depending on where and why you find yourself exploring underground passageways. Like surfers, anglers, climbers, cavers can be reluctant to share their discoveries for fear of overcrowding. It’s less a worry about sharing and more a deep awareness that cave ecosystems are fragile things; if the public, most of whom might not share the same reverence for caves begin crawling through caves themselves, it can degrade the place.

Such was the case with the cave Smith is most associated with—the Rumble Room in eastern Tennessee. Smith was part of the group of cavers who stumbled upon the cave in 1998. It’s truly one of the world’s most spectacular places. It’s a cave that stretches across 4.5 acres with a soaring dome-like ceiling 350 feet above the floor. Nearby, an enormous underground river snakes through miles of caves, lots of which is still unexplored. It’s the second largest known cave in the United States, and the largest east of the Mississippi.

To descend into the pit requires lowering oneself down fixed ropes. As cavers descend, the lights from their helmets twinkle like fireflies in the otherwise total darkness, their beams sweeping across wild swirls of color in the limestone.

For years Smith and his cohort of cavers carefully mapped the Rumble Room without telling anybody about it. They kept the place mostly a secret for four years until a town nearby announced plans for a sewer that, if built, would potentially destroy the cave. To avert that calamity, the cavers came forward and shared their discovery with the world. The sewer plan was abandoned.

Smith retired from his editorial work in 2000 and spent the rest of his life further exploring caves he’d been climbing through for years. In 2014, the same year he reached his personal best of 335 days of caving, he was pinned beneath a boulder for 9 hours that had rolled onto his pelvis as he shimmied through a tight passage. 50 volunteers freed him. He was freed and spent the night in the hospital before discharging himself so he might resume caving.

“This incident, all it did was screw up my plans for the weekend,” Smith told the Chattanooga Times Free Press.

The irascible Smith continued peering into caves until his body no longer allowed, though he’d made plans for even that contingency.

“Even if I’m physically impossible to go in a wild cave, surely I can be put in a wheelchair and wheeled to a commercial cave,” he said in 2014. “And if I can’t be sitting up in a cave, surely they can put me on a stretcher and wheel me into one.”

Such is the nature of caving that a man who has so thoroughly explored the totally unknown worlds beneath our feet remains largely unknown, while people who’ve achieved far less are forever written into the annals of exploration.