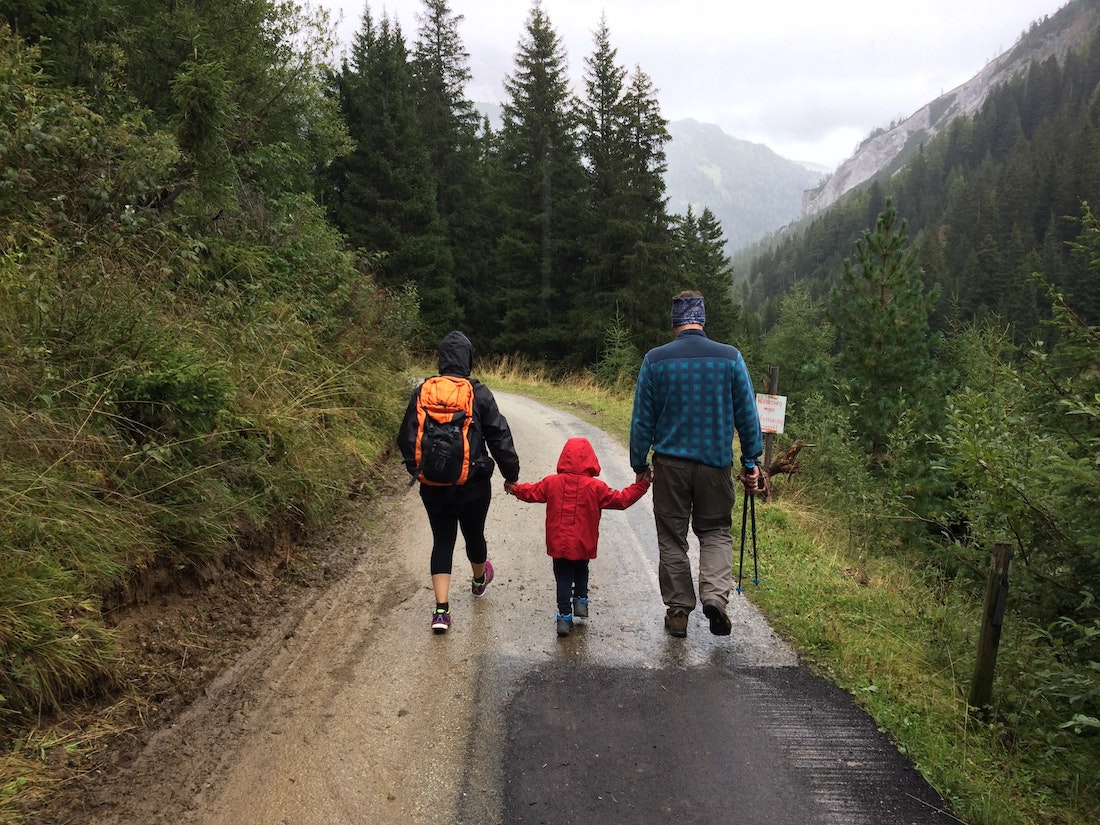 The outdoor industry continues to grapple with the thorny problem of forever chemicals, like PFAs and PFCs (PFCs are technically PFAs too, the terms can be confusing), that are often used to treat performance fabrics for things like water repellency. If a jacket, for example, has been treated with PFAs, those chemicals can be released into water systems as they’re washed, for example. Or, eventually, the clothes might end up in a landfill and rainwater captures the PFAs and eventually washes them into rivers, lakes, or oceans.

For a brief rundown of brands that either don’t use PFAs or that are working to eliminate them, look to the bottom of this article. – Ed.

Martha Spiess, a retired veterinarian, began testing streams and ponds in Brunswick, Maine, after hearing that per- and polyfluoroalkyl substances, or PFASs, had contaminated farms around the state. “It felt like tragedy was falling all around me,” she said.

Spiess was familiar with the compounds often called “forever chemicals” due to their persistence in the environment. She had first encountered them while growing up in Minnesota where her father, an organic chemist, worked for 3M, a major PFAS manufacturer. In the late 1960s, she recalled, her family received a gift box filled with 3M product samples. As she unpacked the items, her father grabbed the can of Scotchgard and told her, “Don’t you ever use this!”

The company’s popular fabric protector was made with a PFAS compound, the dangers of which were apparent even then, Spiess said; “It was something he knew, the lab knew, and I think the company knew. He was angry that they were marketing that.”

Now Spiess tests waters around the former Brunswick Naval Air Station, looking for evidence of another product made with PFAS chemicals, AFFF (aqueous film-forming foam, or “A-triple-F”) that 3M manufactured from the 1960s until the early 2000s.

For decades, hundreds of military bases and airports, and thousands of fire departments across the country used AFFF in training exercises and to combat fires involving combustible liquids. Fluorinated chemicals entered groundwater and surface waters, contaminating private wells and public water supplies. A growing body of research shows that PFAS compounds may disrupt hormonal, immune, and reproductive systems, and may increase the risk of various cancers. 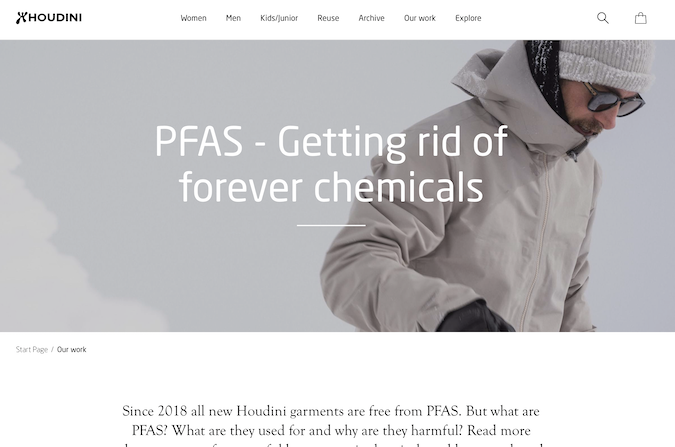 Swedish brand Houdini has been PFA free since 2018.

Increased understanding of medical impacts has led regulators to lower the levels of PFAS compounds deemed safe in drinking water. In 2009, the U.S. Environmental Protection Agency set provisional health advisory levels for two of the better known PFAS chemicals — PFOA and PFOS — at concentrations of 400 and 200 parts per trillion respectively. The EPA revised those numbers downward in 2016, recommending that drinking water not exceed concentrations of 70 ppt for both compounds combined. New advisories, released in June 2022, set levels so low that current testing technology cannot detect them.

Just as toxicological research pushes thresholds for safe exposure close to zero, the ubiquity of PFASs in watersheds and coastal waters nationwide is becoming clear.

When the local water district informed customers that a plume of PFAS chemicals had contaminated a well field downhill of the former Brunswick base, Spiess was not surprised. Water sampling that she and other citizen volunteers had done over the preceding 12 months at sites by the former air station already showed upticks compared to previous data gathered by the U.S. Navy at those locations. And preliminary research conducted in nearby coastal ecosystems indicated that contaminants had traveled farther still.

Being highly mobile and more water soluble than traditional pollutants, PFAS compounds “distribute mainly through rivers and groundwater,” said Christoph Aeppli, a senior research scientist with Bigelow Laboratory for Ocean Sciences in East Boothbay, a village about 15 miles from Brunswick as the crow flies. He is testing blue mussels for 30 different PFAS compounds, as part of a project to assess how the chemicals move through marine food webs and how long they reside in shellfish. It’s already clear, he said, that many PFASs are “taken up by quite a lot of marine organisms, bottom-dwelling ones and those in the water column.”

Downstream of where Spiess gathers samples, David Page, a retired Bowdoin College biochemistry professor, has tested ribbed mussels for PFASs where a brook that drains the base empties into a tidal cove of Casco Bay. Because mussels remain in one place and filter large volumes of water, they “can be used to understand potential human exposure to contaminants,” Maine Department of Environmental Protection biologists wrote in a 2017 report. Mussels can concentrate chemicals, allowing scientists to find contaminants that might otherwise be below detection limits, the report noted.

In a 2020 mussel sampling, Page found that PFOS, which is associated with AFFF use, was highest in ribbed mussels near the head of the cove closest to the former base, indicating that deposits are continuing to run off and “reach biological communities downstream of the facility,” he wrote. The levels he found were higher than those in blue mussels the state sampled farther out the cove in 2014 and 2016. 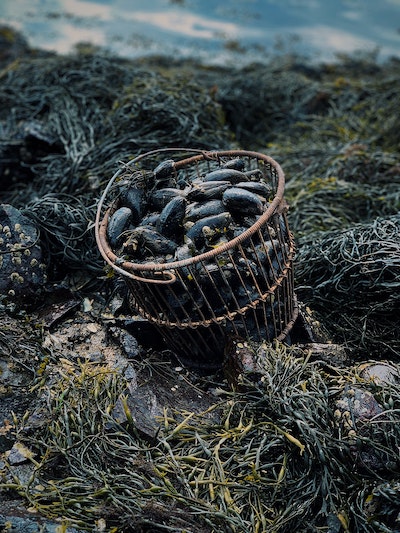 A recent analysis done for NOAA’s National Centers for Coastal Ocean Science assessed mussels throughout the Gulf of Maine, which extends from Cape Cod Bay in Massachusetts to the shoreline of Nova Scotia. The study tested for 12 PFASs at 40 sites and found three compounds: PFOA and PFOS, both at less than 3 percent of sample sites, and PFOSA, a less well studied breakdown product, at 40 percent of sites.

Unlike pollutants such as PCBs or DDT, which primarily accumulate within fatty tissue, or mercury, which primarily accumulates in proteins and muscle tissue, PFASs concentrations are highest in the liver, blood, and kidneys, said Dianne Kopec, a fellow at the University of Maine’s Mitchell Center for Sustainability Solutions. Since wildlife eat most parts of their prey, organisms higher up the aquatic food web can accumulate greater PFAS concentrations than humans, who typically consume only muscle tissue.

PFAS compounds, which number in the thousands, differ markedly in how they’re absorbed and stored within bodies. Those with longer carbon chains, including PFOA and PFOS, tend to concentrate in wildlife through ingestion of prey and can biomagnify in the food web, Kopec noted. Both compounds are still found frequently in ecosystems, a legacy of past manufacturing and of shorter-lived PFAS compounds transforming into the more persistent, often longer-chain compounds. Shorter-chain PFAS compounds can also move directly from the water column into fish through their gills.

“PFAS are toxic enough that low levels can have negative impacts, but some of those effects can be especially hard to track in wildlife,” said Anna Robuck, an environmental chemist whose doctoral research focused on PFASs in marine food webs. (She spoke as an adjunct professor at the University of Rhode Island, not in her current role with the federal government.)

Organisms at the bottom end of the marine food web, like shellfish and plankton, appear to have lower accumulations, but the species that feed on those organisms — such as birds — “are full of PFAS,” Robuck said. “We see a much different pattern. Air-breathing organisms are more vulnerable to bioaccumulation and biomagnification” of the chemicals.

In research spanning seven years, Robuck has looked at PFASs in Gulf of Maine water, sediments, plankton, coastal and offshore seabirds, and humpback whale tissue. “There is no species that did not have PFAS in them,” she said. “There are no clean samples.”

Rachel Rice, a graduate student at College of the Atlantic in Bar Harbor, is analyzing the presence of 43 PFAS compounds in seven marine mammal species, assessing the feeding habits of each species and sampling diverse tissues. Rice’s study will report on PFAS levels in seawater, plankton, fish, and lobster, and will compare current levels in seals to a baseline set 13 years ago.

In 2009, long before the recent public spotlight on PFASs, researchers at the Shaw Institute in Blue Hill studied the accumulation of fluorinated compounds in harbor seals, writing that they found evidence of “diffuse sources of [perfluorochemical] contamination throughout the northwest Atlantic.”

Given the “concerted inputs of PFAS” from waterways entering the Gulf of Maine and the long residence time of its waters, Robuck expects that Rice will find high levels. Seals feed at the upper reaches of the marine food web, she said, which is “at the end of the day, where we’re eating.”

“E very contaminant ends up in water,” Kopec said, and “water always flows downhill. It’s all moving down to the ocean.” Many scientists assumed that oceans would become the ultimate sink for PFASs, with compounds cycling through marine ecosystems and settling into bottom sediments over decades.

But last year, researchers at Stockholm University reported on what they termed a “boomerang effect,” where PFAS chemicals return to land in the form of sea spray, carried through the atmosphere and falling again on soils and waters.

The cycling of PFASs from surface environments into the atmosphere is something Stockholm University scientists have tracked for a decade. In August, they shared new data showing that rainfall around the globe contains PFAS compounds, often at levels that exceed the EPA’s newest drinking water advisory levels for PFOA and PFOS.

Rain water tested around Casco Bay over several months in 2020 found evidence of multiple PFAS compounds. Those droplets, falling on the former naval base in Brunswick, pick up a heavier load on their way downstream, moving inexorably back to the sea.

That poignant realization inspires Martha Spiess to keep sampling local waters, hoping others will start testing as well. On a September morning, she returned to the brook and took a sample that lab analysis later showed had 18 PFAS chemicals with a total concentration of 1,291 ppt. “PFAS are there,” she said. “Why are we waiting?”

A version of this article first appeared in The Maine Monitor, the online publication of the Maine Center for Public Interest Reporting. The project was produced with support from the Doris O’Donnell Innovations in Investigative Journalism Fellowship, awarded by the Center for Media Innovation at Point Park University in Pittsburgh.

Marina Schauffler is an environmental journalist in Maine.

AJ online editor Justin Housman here. If you’re reading this and wondering if there are brands that are producing technical gear without PFAs, there are a few.

Correction: A previous version of this article stated Fjällräven was using zippers coated with PFAs, but that was based on outdated information and their zippers are now PFA-free.