The Secret Treehouse Is a Hideout Fort for Grownups

The Secret Treehouse Is a Hideout Fort for Grownups

The foothills of the Blue Mountains start creeping up about 30 miles west of Sydney, Australia. Within the 3.2 million acre, Blue Mountain region – an area equivalent in size to Death Valley National Park – there are seven national parks, a UNESCO World Heritage Site, over 155 miles of trails, and regrettably, a thriving Segway tour business.

Don’t let that last part deter you. Mostly, the rugged Blue Mountains are the dream petri dish for all of us natural science nerds. If there’s such a thing as a hotspot of botanical evolution, it’s in the Blue Mountains, where botanists have tracked forest development from Gondwanaland to today. Geologically, the area is similar to the sandstone-based landscapes of the Southwestern U.S. There are hidden, deep slot canyons and rugged topography topped by flat plateaus that drop unceremoniously into escarpments of bare, buff- and salmon-colored stone. Unlike the U.S. desertscape, however, those escarpments give way to thick forests of ancient pines and eucalyptus trees.

In addition to over 100 species of eucalyptus, there are another 150 species of plants unique to the Blue Mountains. The Australian government has protected about 350 species of endangered plants and animals in that area alone. The names are right out of a Dr. Seuss book: brush-tailed wallaby, long-nosed potoroo, Blue Mountain water skink, magenta lilly-pilly. The list goes on.

Eucalyptus forests are rich with the crisp, herbal scent of eucalyptus oil, which also happens to take credit for the distinct blue light that gives the Blue Mountains their name. While dust and water vapor in any environment will scatter high frequency, blue light, the addition of eucalyptus oil is presumed to amplify the effect.

Whether the draw is the light, the topography, or the lung-clearing capacity of eucalyptus, the Blue Mountains attract artists from all over the world. In the circuit of nearby small towns, creative work is the third largest economic driver. These, mind you, are towns that work to earn official endorsements as “slow towns.” It’s not only a verified pace of life, it’s about looking out for the well-being of all of their citizens.

So it’s no surprise that one of the local lodges was designed with the eye of an artist, the autonomy of the forest, and the kooky appeal of a Dr. Seussian imagination. Built on high stilts above the forest canopy is the Secret Treehouse. This adult fort has never-ending views of the micro-rainforest that surrounds the Colo River gorge, Australia’s Grand Canyon. Every detail of the non-linear space reeks of hand-hewn love and attention.

The Secret Treehouse sits amidst 600 private acres adjacent to a national park and the UNESCO-designated area, so privacy isn’t a problem. It’s close to reasonable mountain biking and all the forest you’re up for exploring. Just keep an eye out for lilly pillies, potoroos, and perhaps, if you’re lucky, a Lorax, too.

Neither secrets nor treehouses come cheap, so buckle up and get ready to throw down $771 for a night at the Secret Treehouse, via Blue Mountains Cabins or Airbnb. Even if that quote is in Australian dollars, you’re still looking at over $586 USD each night. On the plus side, enjoying every minute seems like a reasonable expectation. 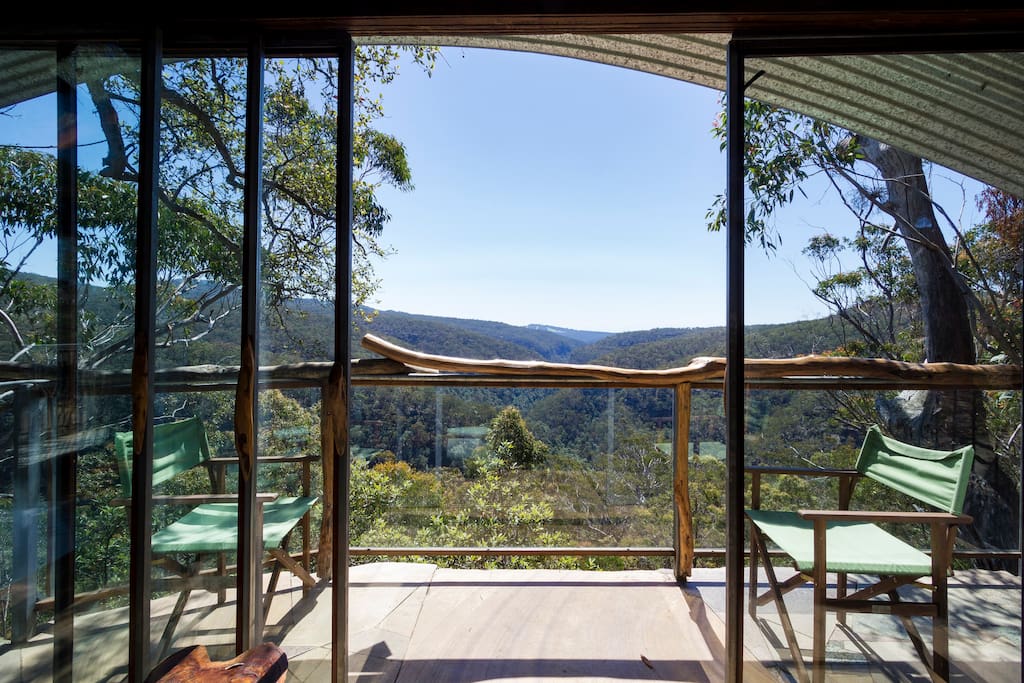 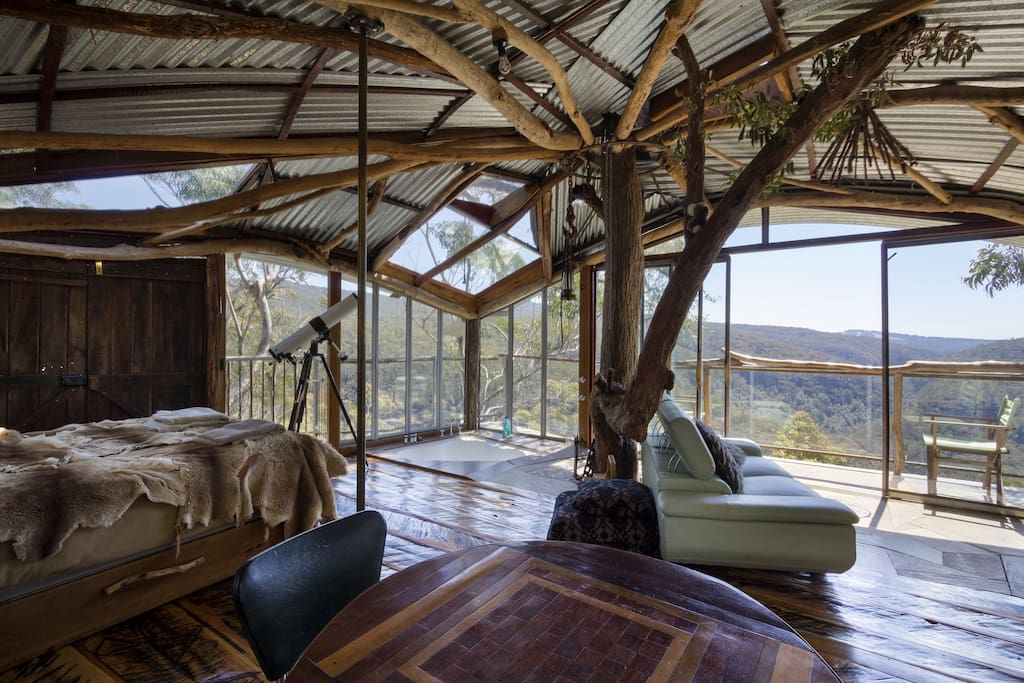 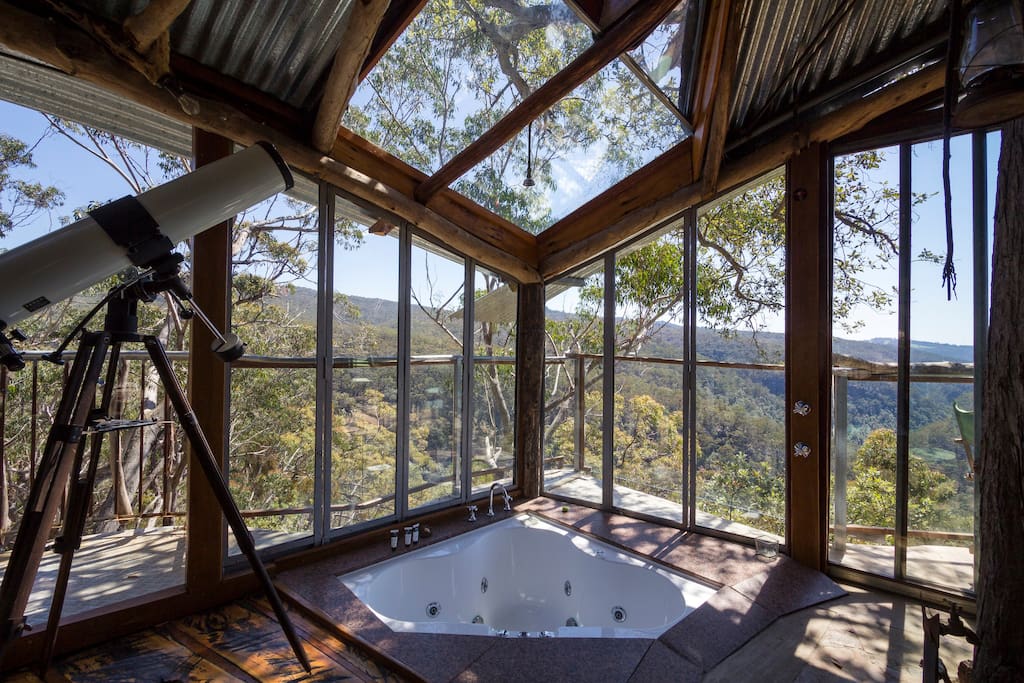 Weekend Cabin isn’t necessarily about the weekend, or cabins. It’s about the longing for a sense of place, for shelter set in a landscape, for something that speaks to refuge and distance from the everyday. Nostalgic and wistful, it’s about how people create structure in ways to consider the earth and sky and their place in them. It’s not concerned with ownership or real estate, but what people build to fulfill their dreams of escape. The very time-shortened notion of “weekend” reminds that it’s a temporary respite.