For the past month, masked and armed men have been stealing high-value mountain bikes at gunpoint in the hills east of Oakland, Calif. There have been at least five such incidents in recent weeks, though it’s not unheard of for armed robberies of bikes to take place in the area in years past. Police have made no arrests for the recent robberies thus far.

Most of the encounters have been in or near Joaquin Miller Park, a very popular place for the East Bay mountain bike scene. Lots of good trails, redwood groves, proximity to the thriving cities of Berkeley and Oakland are the draws. But the thieves have taken notice of so many people there on bikes costing $5,000 and up that are easy to steal.

Many of the thefts are similar. A car pulls up alongside a rider, a person with a mask covering their face gets out, points a gun at the cyclist, and takes their bike, making a quick getaway. Occasionally, bikes are taken from the racks of vehicles in trailhead parking lots and when the driver gets out to protest, they get a gun in the face.

A more brazen attack occurred in April in Berkeley, when thieves carjacked a van carrying members of a high school mountain bike team, making off with four bikes and the team’s van. Thieves followed the van off a busy freeway and when it parked in front of one of the kid’s homes, the carjackers quickly got out of their trailing vehicle, brandished guns, and took the van and the bikes, leaving the students and their coaches outside, horrified. 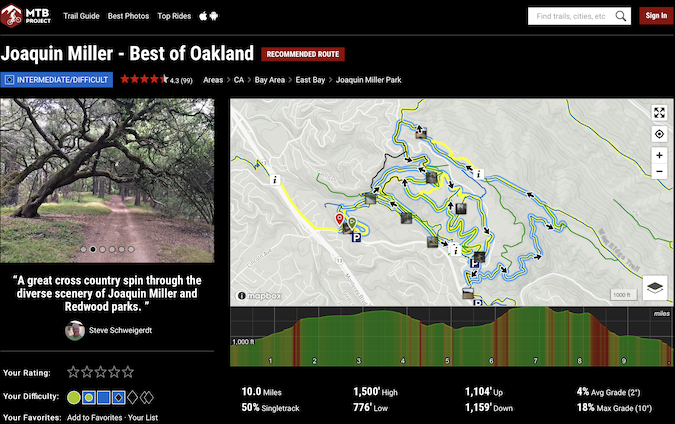 Plenty of good riding in those hills.

[ed note: I have had two mountain bikes stolen from the rear rack of my vehicles in recent years, both in Marin County, across the Richmond/San Rafael Bride from Oakland/Berkeley. In both cases, my car was parked near freeways providing easy exit points for thieves. Police said my car was likely followed from the freeway to where I parked, both times. In my defense, the bike were locked to the rack both times too, though with cable locks, which I’ll never use again. In the years since, I’ve learned thieves target affluent areas with easy access by car. Unsurprising, perhaps, but a lesson you typically have to deal with personally before it begins to click.]

“It’s heartbreaking to think they might be discouraged by this happening,” Nick Hoeper-Tomich, the team’s coach, said. “They love to ride and I don’t want anything to get in the way of that.”

Police don’t have a lot to go on here, with the men who’ve committed the offenses wearing ski masks and using different cars. But as always, if you’re buying a used bike, keep your antennae up and if something feels fishy with the bike’s provenance, walk away.

Since my bikes were stolen, I’ve had excellent luck with the ABUS Granit X-Plus 54 Mini U-Lock combined with the Kryptonite Keeper chain. I never leave a bike on my rack without employing both of these.