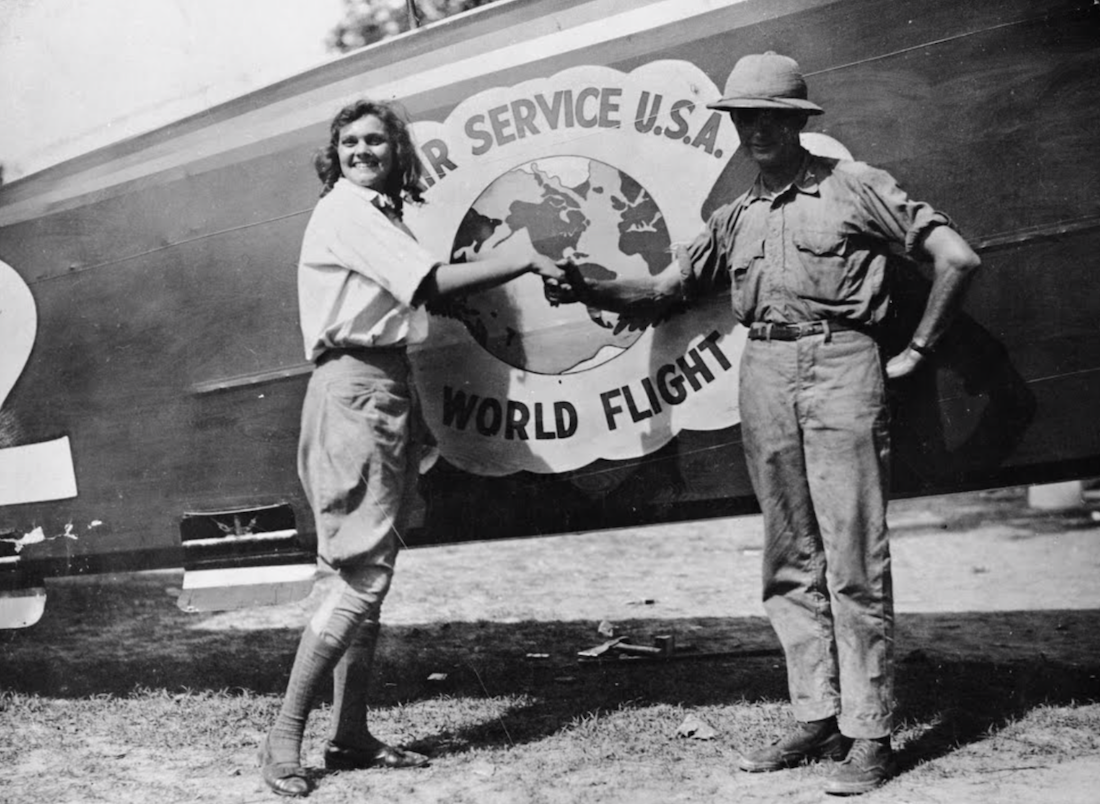 There are well over 4,000 stories in the Adventure Journal archive. Every so often we dip in to those archives and republish an older piece for new readers to enjoy. – Ed.

Aloha Wanderwell. It’s a name so perfect for an adventurer it sounds invented. Because actually, it was invented. But Wanderwell, a 1920s traveler, often billed as the “Amelia Earhart of the Auto” and the “World’s Most Traveled Girl,” was such a marvel, so game for exploration and adventure, regardless of discomfort or danger, she more than earned that incredible stage name.

Wanderwell was born Idris Galcia Hall in Winnipeg, Canada, in 1906. After Idris’ father, a British reservist, was killed in the Great War, her mother moved the family to France. Idris quickly grew into a restless tomboy, devouring her father’s adventure books and challenging authority. She’d also physically grown quickly, six feet tall as a teenager, with a shock of blonde hair. Her spunk made her ill-suited to life in the convent school she’d been enrolled in by her mother.

“I ached for action, but I did not know in which direction to go,” she once wrote in a memoir. “I had already bothered my mother on the subject of my earning money. I wanted a career and I wanted to become the man of the family.”

In 1922, Idris, then 16, read a strange advertisement in the Paris Herald, almost too good to be true. The author, a Captain Wanderwell, was seeking “Brains, Beauty & Breeches — World Tour Offer For Lucky Young Woman…Wanted to join an expedition…Asia, Africa..” Wanderwell was heading a kind of endurance expedition, composed of a team driving a Ford Model T to as many countries as possible, in a mission to spread the gospel of the League of Nations.

Captain Wanderwell was, as you might expect, also an assumed name. He was born Valerian Johannes Piecynski, a Polish national. He took on the name Walter Wanderwell when he kicked off his fabulous around-the-world expedition by car. It’s possible he was a German spy in the war. Nobody seems to know for sure. 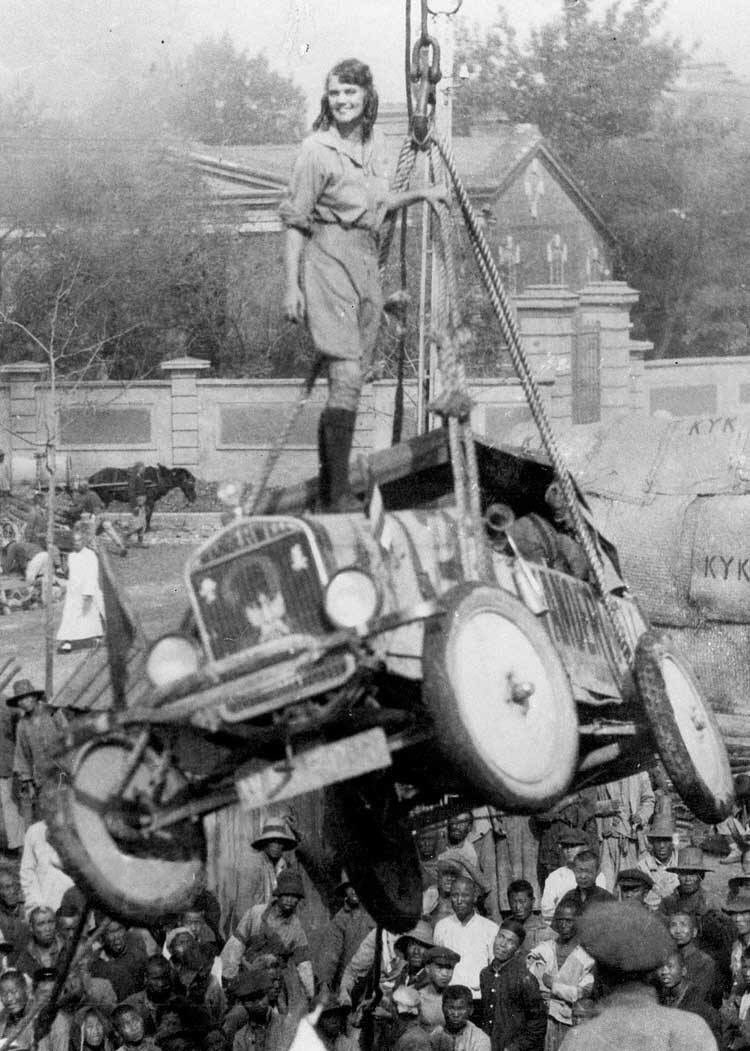 Idris couldn’t resist the thrilling ad and quickly applied for a position as a secretary and driver. Those positions were only open, however, after being vacated by Wanderwell’s first wife, Nell, who’d just left the marriage and the expedition behind. Idris was enthusiastic, in good shape, and spoke seven languages (French, Spanish, Italian, English fluently; a little Russian, Japanese, and Chinese). Plus, there was the whole six feet tall and blonde thing. Wanderwell hired Idris in 1922, they fell in love, and by 1925 they were married.

Right away, the newly named Aloha quickly became the star of the promotional films and photos the Wanderwells made to help spread news of their trip and to finance their adventures. From 1922 to 1931, the couple drove through 43 countries on four continents in a bid to visit as many countries as possible. Aloha was a brilliant and tireless woman-of-all-trades. Not only was she often the face of the trip, she was a photographer, film director, seamstress, mechanic, translator, driver, hauler—you name it.

They moved from France through the ruins of food-rioting, war-ravaged Germany: “There was Germany, with lines of hungry, emaciated persons standing before bakery stores,” Aloha wrote. “There were shots fired into crowds, and over everything a terrible, unceasing unrest. It was like traveling along the rim of a spurting volcano.” They witnessed fascist rallies in Italy, made their way into Palestine, and camped at the foot of the Sphinx in Egypt. Visiting Siberia, Aloha was named an honorary colonel by the Siberian Red Army. In Africa, they were forced at points to attach the car to an oxen train, and Aloha helped drive the animals through rivers. Wanting to visit Mecca, Aloha disguised herself as a man to slip into the crowd.

Eventually, the Wanderwells struck out across the vastness of India and China and quickly discovered that vastness would be a never-ending series of stress. Fuel was scarce in that part of the world, so Aloha often used kerosene in place of gasoline. When the Model T’s differential needed lubrication, she mashed up bananas and greased the gears with that. After doing a bit of elephant hunting, Aloha once used rendered fat from the massive animals diluted with water as an impromptu source of motor oil. When they ran out of kerosene at one point in China, Aloha helped drag the car for 80 miles before they were able to refuel.

She proved to be a damn good hire by Captain Wanderwell.

Unsatisfied with overland travels, Aloha learned to fly a German Junker seaplane and took off with Walter for a flight into the Amazon basin. They misjudged their fuel levels and crashed deep in the jungle, but both walked away unharmed. While Walter set off for civilization to search for assistance, Aloha befriended and filmed the local Bororo tribe in remote Brazil. The movie she made, Flight to the Stone Age Bororos, was the first ever documentation of the Bororos and is in collection in the Smithsonian. 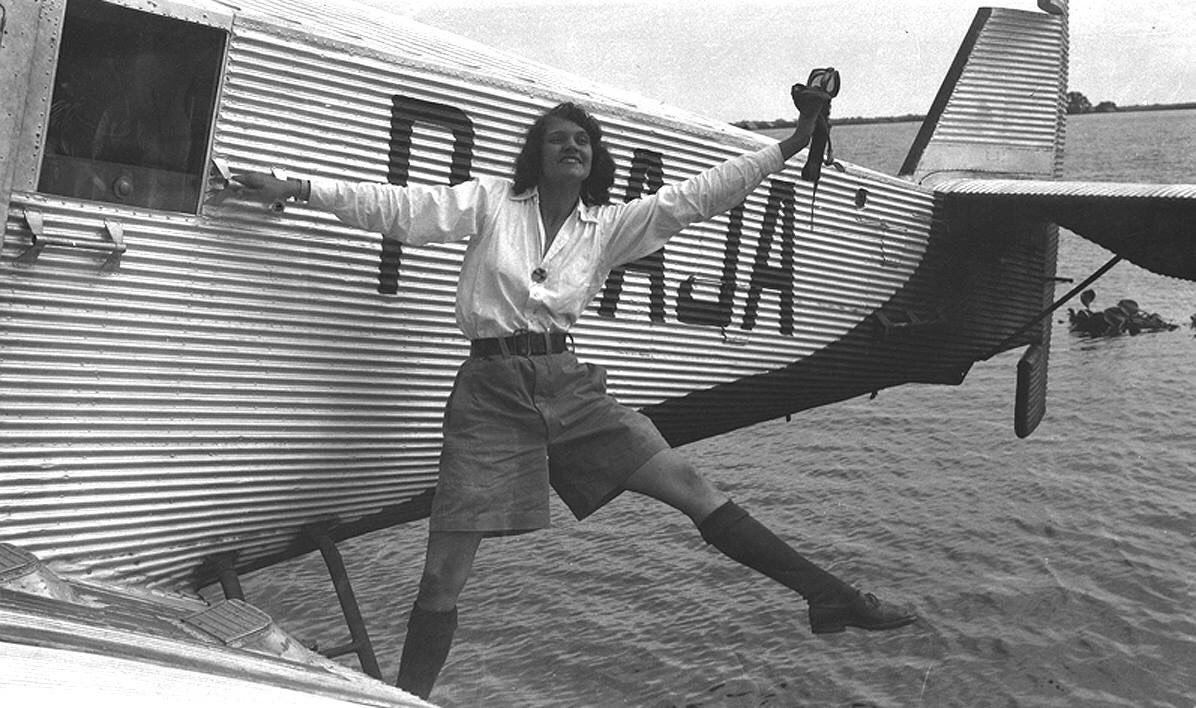 In 1931 the couple ended their journey and moved to Southern California. Strangely, in a case that’s never been solved, Walter Wanderwell was murdered on the couple’s yacht in Long Beach a year later. Aloha, determined to continue her travels, simply picked up and married another Walter, Walter Baker this time, a man who’d actually been a cameraman on Wanderwall’s earlier travels.

The two resumed adventuring around the planet, filming their travels, until World War II began, and the world lost interest in starry-eyed travelers.

Throughout the 1920s, Aloha toured 80 countries and traveled more than 380,000 miles. She joined the French Foreign Legion. She crossed the entirety of India and traveled from the Nile River to Cape Town, becoming one of, if not the first, women to ever make those treks.

Plus, you know, she greased a differential with mashed bananas. Genius.

After decades of showing her films and photos, and giving lectures regaling her globetrotting, Aloha passed away in Newport Beach, California, in 1996. A place she’d likely never have seen, after a life she’d never have lived, traipsing through lands she’d never have been able to imagine, had she not decided to chance it all on a newspaper ad. Wanderwell, indeed.

There’s lots more to Wanderwell’s story, which you can read all about in Aloha Wanderwell: Call to Adventure