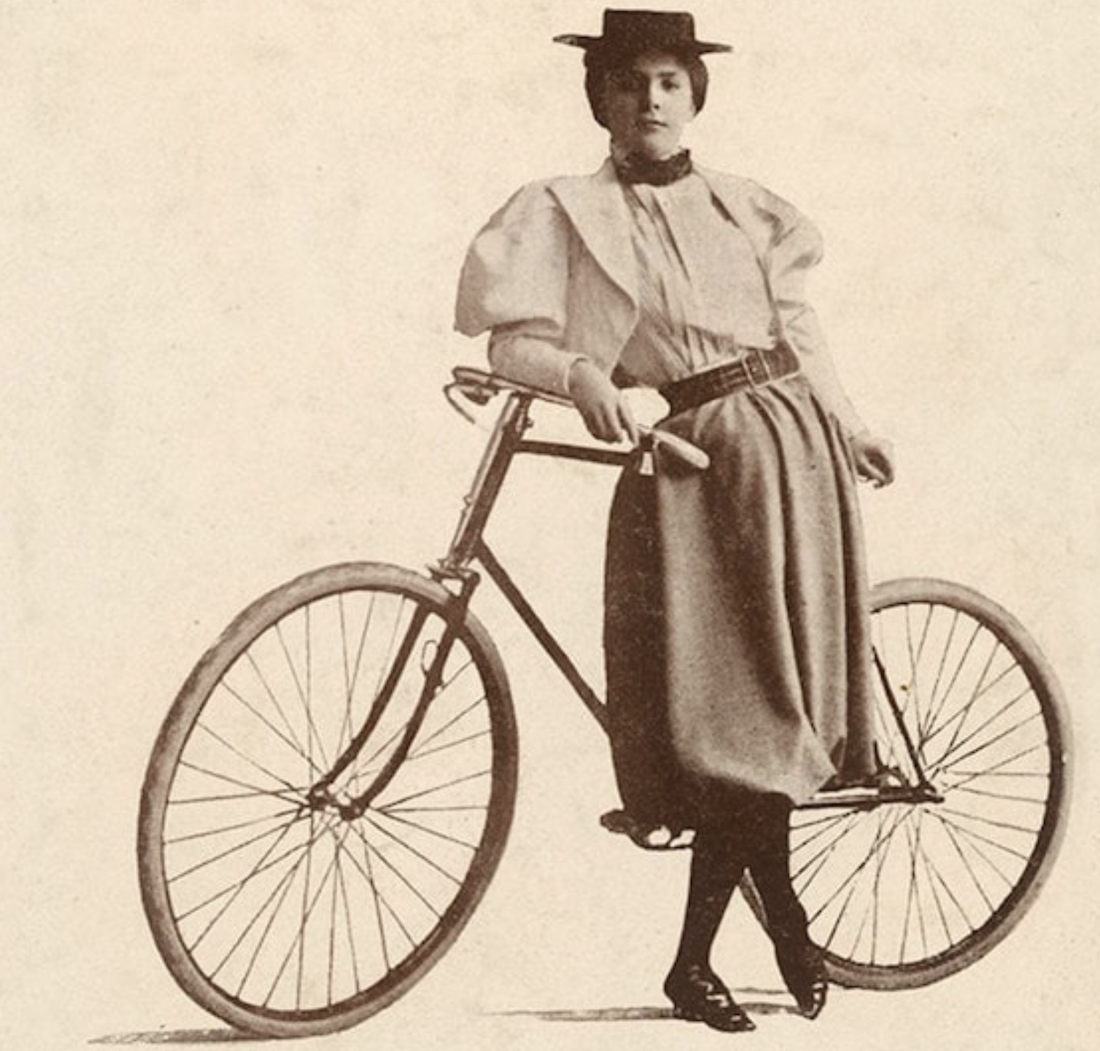 Two misogynists walk into a Boston bar. One bets $20,000 that a woman can’t ride a bike as far as a man. The wager is accepted and the woman to prove them wrong steps up to the plate.

That woman was a 24-year-old wife and mother of three named Annie Cohen Kopchovsky. A Latvian immigrant to the United States, Kopchovsky had lived a relatively quiet life until that day. But within a few weeks, she would take a 42-pound Columbia bike and attempt to ride it around the world. In order to win the bet and relieve the men of $10,000, she would need to circumnavigate the globe in 15 months and earn at least $5,000 while in transit. And by the way, she’d only been on a bike a handful of times before this.

That’s the legend that kicked off Annie Londonderry’s ride around the world. It’s a sweet story. The thing is, not all of the details presented as facts are entirely true. Yet, despite several lies and embellishments, somehow Londonderry still emerges as quite the badass.

The gist of the story is accurate. Londonderry did indeed circumnavigate the world with a bicycle. It’s just that the circumstances around the trip are murky. The two guys who placed the original bet may have been manufactured by a savvy marketing guy from Columbia Bicycles and possibly Ms. Kopchovsky herself. (We’ll get to questions about her name later.)

The 1890s were a great time for cycling. Popularization of the safety bike (two similarly or equally sized wheels) led to a craze in the United States. Cycling was booming and it was changing society in more meaningful ways than just quad strength. Bikes gave an unprecedented amount of freedom to women, allowing them to travel more easily, move independently, and explore neighborhoods beyond their own. Susan B. Anthony famously credited bikes with doing more “to emancipate women than anything else in the world.”

Columbia Bicycles may have recognized an opportunity to win over women and to earn to some easy PR. It’s also been suggested that perhaps Kopchovsky grasped onto the notion of freedom and pitched the idea to Columbia in order to leave her quiet Boston life for a while. 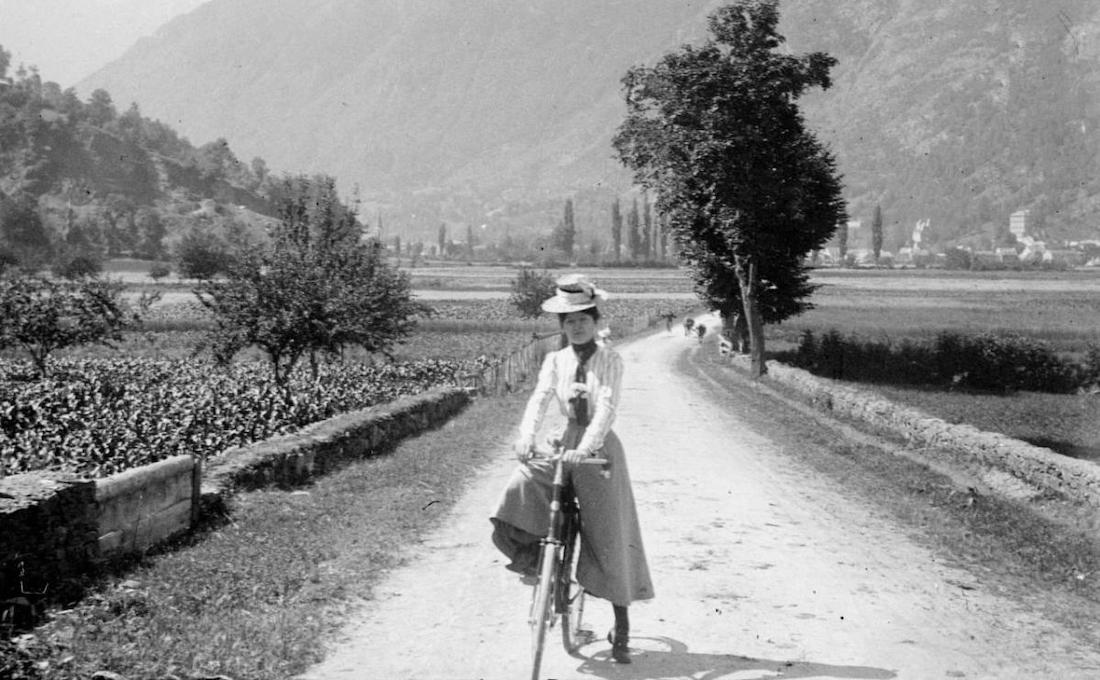 But if Kopchovsky was the mastermind of the adventure, it makes sense that she would need a juicier backstory. Finding sponsorship for a female athlete and explorer was next to impossible then, let alone if the woman was neither an accomplished athlete nor an explorer. If the adventure were born from a publicity-friendly wager, the odds of attaining sponsors were significantly better.

Regardless of how it came about, Londonderry was game for the task and proved to be a savvy self-promoter. Born a Cohen and married to a Kopchovsky, she took the name Londonderry only for the bike trip. Some claimed traveling solo was safer for a gentile woman than for a Jewish woman. Ultimately, it was a business decision. Londonderry Lithia Springs Water Company, based in New Hampshire, paid her to use the name and to affix a Londonderry decal on her rear wheel. Annie Londonderry was officially born. (And you thought today’s influencer marketing was something new?)

Cheered on by a crowd of 500, she left Boston on June 25, 1894, with a change of clothes, a lady-like revolver, and next to no money. In addition to covering more than 24,000 miles, her task also involved earning money along the way. Bold by all accounts, Londonderry was undaunted. She set up speaking engagements, sold photos of herself, and plastered her bike and body with advertisements. If only there had been Lycra and neon dye, she would have been nearly indistinguishable from team riders in the Tour de France.

Initially, she headed west and learned a few lessons right off the bat. First, her 42-pound women’s bike wasn’t going to cut it. She swapped it for a 21-pound, diamond-geometry (a.k.a. men’s-style) Sterling ride. Second, she was going the wrong way. After doing an about-face in Chicago, she rode eastward to New York City and continued on around the globe.

There’s an inevitable sticking point in the very notion of riding a bike around the world: those water hazards we call oceans. While there are routes that can maximize overland travel, those are not the paths Londonderry followed. Her route was chock-full of water, which meant she spent a fair bit of her travel on steamships. Even so, she pedaled thousands of miles in between ocean travel.

Her route took her first to France, south to North Africa and the Arabian Peninsula, east to Sri Lanka, on to Singapore, north along the Asian Pacific Rim countries, a final steamship to San Francisco, then a zigzag crossing of the United States back to Boston. Along the way, she checked in at designated United States consulates to prove her presence at the location.

The trip was a mixed bag for Londonderry/Kopchovsky. She was mugged, run over by a buggy, and chastised for her unfeminine choice of attire, which evolved from a corset and full skirt to bloomers and eventually to men’s clothes. In bike-crazy France, she was celebrated as a heroine in one breath then mocked for her lack of femininity in the next.

As any woman traveling alone in the late Victorian Era, let alone riding a bike solo, she was regarded as both a curiosity and the epitome of courage. Even today, leaving one’s family for more than a year to ride around the world is a bold move. To do so without money, with little riding experience, and without a support system is absolutely badass. It’s unfortunate that Londonderry didn’t recognize how truly monumental her trip was on its own merits.

Londonderry, it turns out, didn’t have a firm commitment to the truth. Her embellishments of certain experiences teetered into outright lies. She told wild tales of gunfights, Bengal tiger hunts, exotic treks, and coming face to face with war criminals, none of which happened as she described. But there is evidence to chart much of her experience and to prove the thousands of miles she rode. (Estimates are that she logged upward of 7,000 miles by bike and steamshipped the rest of the route.) There’s pride in her land-bound navigational skills and her tenacity. She won’t go down in history as one of world’s best cyclists in speed or endurance, but she deserves her place for smart strategy in planning an achievable bike and boat trip in 15 short months.

Plus, she deserves a place in our hearts for taking the idea of bike freedom and making it literal. Women in the 1890s were still second-class citizens, with few rights. Most men thought she was incapable of succeeding. Some women thought she too audacious; others found her inspiring. Even her own sponsors talked her down. “It was a great and hazardous undertaking for a girl,” advertised Londonderry Water. Sterling offered this gem of a backhanded compliment, “She has, with a pluck and resolution unusual in one of her sex, surmounted every obstacle.” To ignore the naysayers and the bigots in pursuit of an unlikely adventure takes guts.

Fifteen months from the day she left, Londonderry rolled back into Boston. She had successfully gone around the world with a bike, if not always on a bike. And she had seen the world on her own terms.

Londonderry reunited with her family and moved to New York City. There, she rode the wave of her fame for a short bit of time, trying her hand at journalism. She died, long out of the public eye, in 1947.