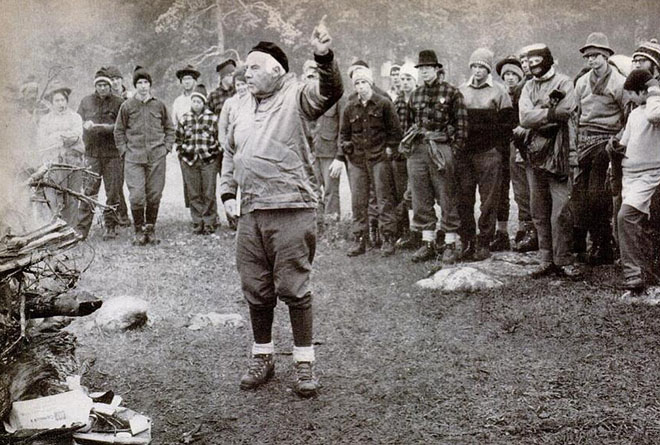 Paul Petzoldt was the unlikely founder of NOLS, the National Outdoor Leadership School. He was born in Iowa and later with his family moved to the mostly flatlands of southern Idaho, but he fell in love with the mountains at an early age.

As a boy of only eight he scrambled down a canyon to the edge of Idaho’s Snake River only to realize to get back out he’d have to free climb. Which he did. Then at the age of 11 he went climbing in the Sawtooths. When he was 14 his mother was widowed and she decided to head back to the Midwest, but Petzoldt, now at home in the mountains, stayed behind. At 16, in 1922, he climbed the Grand Teton in cowboy boots, supposedly the youngest climber ever to summit.

“We did everything wrong,” Petzoldt told The New York Times. He got through it, though, and realized not only that he wanted to spend the rest of his life in the mountains, but that people like him would need instructions on how to survive an adventurous life.

In his teens Petzoldt was a hobo, worked in kitchens, guided when he could, and did whatever necessary to get by. When he was invited to spend a year in Europe in the 1930s, he leaped at the chance. His first trip there, in 1934, he famously climbed the Matterhorn, came down, and then went back up and over the other side on the same day. He later mused that guides weren’t treated well, but rather were considered second-class citizens, which he despised.

Word of his boldness spread and he was asked to join an American expedition up K2 in 1938. Surprisingly, Petzoldt, the least experienced climber on the trip, proved one of the strongest members. Deep into the expedition with the entire team growing exhausted and short on food, Petzoldt and climb leader Charles Houston made a summit push. He didn’t summit, but his first wife, Patricia, wrote that he’d come within 150 feet of the top (accounts differ).

A 1969 Life Magazine story about Petzoldt catalogued just some of what the man was supposed to have done, at that point by age 61:

He knows the Tetons and the Wind River Mountain Range the way a good cabbie knows the Bronx. Once, when nobody else dared climb to the top of the Tetons to investigate a plane crash, he and a ranger made a three-day ascent in a whiteout blizzard to discover 23 corpses…He has also been know to kill an elk with a pocketknife, walk a tightrope, and disguise himself as a Sikh potentate during an anti-Western street riot in Calcutta. He has played water polo and football, raised alfalfa, hopped freights, and been a chef, a fur trapper, a downhill and slalom ski champion, a traveling lecturer, a golfer, a used car salesman and a dude rancher…Never mind. If someone told me Petzoldt had a blue ox named Babe or could literally leap tall buildings with a single bound, I wouldn’t be too surprised.

He did actually teach medical evacuation techniques to soldiers in the U.S. Army’s 10th Mountain Division during World War II and worked in the Department of Agriculture sending food to Russia while the Nazis held Stalingrad. Then he worked with the Chinese Nationalist Relief Administration in Shanghai and made another Himalayan trip, then off to India to help run a factory.

Back from Asia, Petzoldt continued to guide and climb, but he didn’t really hit upon a true calling until he was in his late 50s. He was asked to head up the Colorado chapter of Outward Bound. There, he realized he wanted to start something similar, but different, and in 1965 in Wyoming he started NOLS.

His goal wasn’t to teach kids to be tough, like Outward Bound, but to teach them real-life skills. And he wanted kids to understand that the outdoors are fun, that he’d lived as much of his life outside because it was enjoyable, not because he was tough. (Though he was: At 6’1″ and 240 pounds of muscle, Petzoldt had a physical presence that impressed.)

But because NOLS had very little money, its survival hung in the balance. Petzoldt told Life that he was chagrined about not having more money to offer more kids scholarships. “Once I could have bought a cheap option on the Jackson Hole ski resort,” he says, “but that I didn’t is probably the most fortunate thing of my life. If I had a lot of money I’d get into all kinds of trouble. I’d probably weigh 300 pounds or be an alcoholic, or both.”

Some of what Petzoldt taught survives today, such as the on belay/belay on commands in climbing, which were Petzoldt’s invention. The following practice, described by Petzold, is no longer followed by NOLS, however.

At the beginning of the course we generally kill a couple of cows – shoot them, cut their throats, de-gut them and have the girls butcher them. It’s a good way to learn how to dress game. Inevitably someone faints and accuses us of cruelty, but we say, “Where do you think your steaks come from? They aren’t manufactured at the supermarket, you know.”

More than 120,000 students have graduated from NOLS, one of whom was David Breashears, who entered as a 15 year old even though he couldn’t afford it. Petzoldt gave him a scholarship. Breashears, who went on to be one of the greatest American explorers and climbers, summiting Everest five times, told The New York Times upon Petzold’s death in 1999, “It was an indicator of his generosity as a person and his love for exposing young people to the outdoors that I got to attend.”

But perhaps the best tribute came from Senator Alan Simpson, who credits Petzoldt for opening his eyes on conservation issues. Upon his death Simpson said, “This was a man to match our mountains. That was Paul. Earthy, warm, wise, witty, a bear of a man with a heart as big as his body and a smile as big as both of those. I worked with him on legislation. I never hiked with him, but he sure enriched my life, and he brought joy and pleasure and had the guts and courage of a mountain lion. He was just magnificent. He was all the man there is.”

Want to read more about Petzoldt? Pick up a copy of On Belay: The Life of Legendary Mountaineer Paul Petzoldt