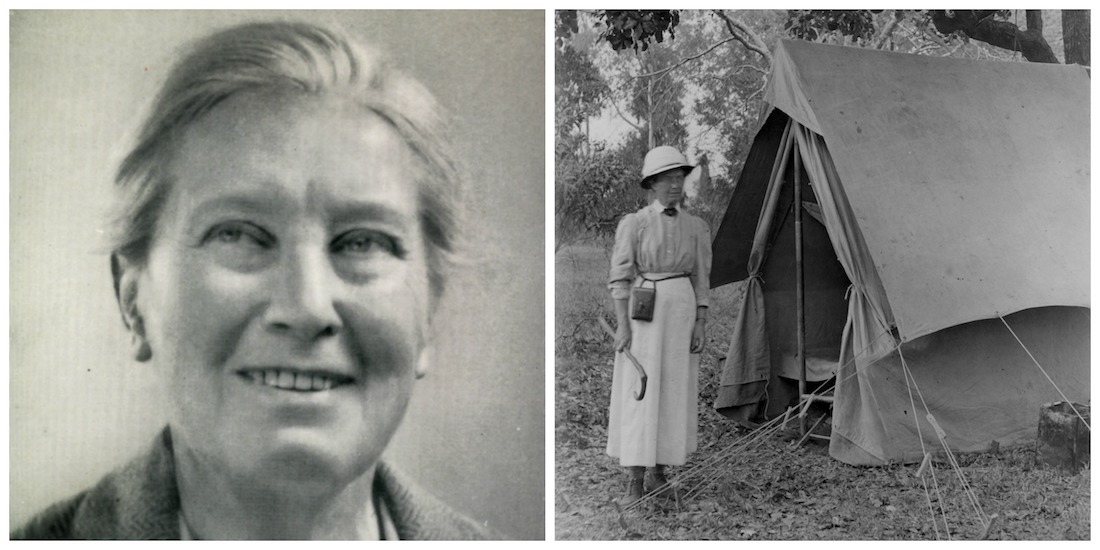 Gertrude “Truda” Benham arrived in the Canadian Rockies in 1904 at age 36 and began climbing everything in sight. She’d spent years at home in England, stifling her wanderlust as she nursed first her father and then her mother, who died in 1903, leaving her a modest inheritance. Benham stepped off the train in June and immediately began bagging summits with a pair of local guides, brothers Hans and Christian Kaufmann.

They began in the Valley of the Ten Peaks, a postcard cordillera surrounding Moraine Lake in Banff National Park. At the time, the peaks were simply numbered one through ten in the language of the Nakoda people. Number One, or Hiji, was a 10,613-foot crest of glaciated granite rising above Moraine Lake. When the Geographic Board of Canada asked the eminent American climber Charles Fay to select a peak to be named in his honor, the professor chose Hiji and he, too, soon arrived in Banff to make the first ascent of his mountain.

Benham, however, had her eye on the same spectacular peak, and on July 19th she and Christian Kaufmann climbed an icy hourglass couloir between Peaks Number Three and Four, reaching a summit they took to be Hiji. Discussing their route later at Moraine Lake, however, a fellow mountaineer told them they’d been mistaken. Hiji was yet to be climbed, and Fay intended to climb it the very next day. He’d hired Hans Kaufmann to guide him.

The men started early from Consolation Lakes, only to abandon the climb in the face of difficult snow conditions and rockfall. Meanwhile, Benham and Christian Kaufman reached the first ascent the same afternoon by a different route. Annoyed, Fay decided to give his name to another peak in the range, only to learn that Benham had climbed that one too. Eventually, he relented and made the second ascent of the mountain that now bears his name.

Benham had already moved on, capping her Canadian peak-bagging adventure with a remarkable traverse. She set out from Lake Louise at midnight with the Kaufmann brothers, crossing the saddle between Mt. Lefroy and Mount Victoria, dropping down to Lake O’Hara, ascending Cataract Valley and climbing to the 10,495-foot summit of Mt. Stephen by a previously unclimbed ridge, reaching the town of Field in the Kicking Horse Valley by lantern light at 3 o’clock the next morning—a 27-hour day netting more than 22 miles and 9,000 vertical feet.

The publicity-shy Benham made little of the traverse, or such other landmark achievements as the first female ascent of Kilimanjaro in 1909, crossing South America and Africa—three times—mostly on foot, and extensive treks in the Himalaya. She was more interested in having adventures than talking about them.

“Benham herself described her first female ascent of the sharply pointed Mt. Assiniboine in such modest, understated terms that the Canadian Alpine Journal staff felt compelled to add a footnote about her ‘wonderful record of mountains,’” Katie Ives wrote in a 2014 Alpinist essay celebrating women of Benham’s era who abandoned “traditional Victorian notions of domesticity and dependence” and began to see themselves, and behave, as New Women “capable and worthy of autonomy.” 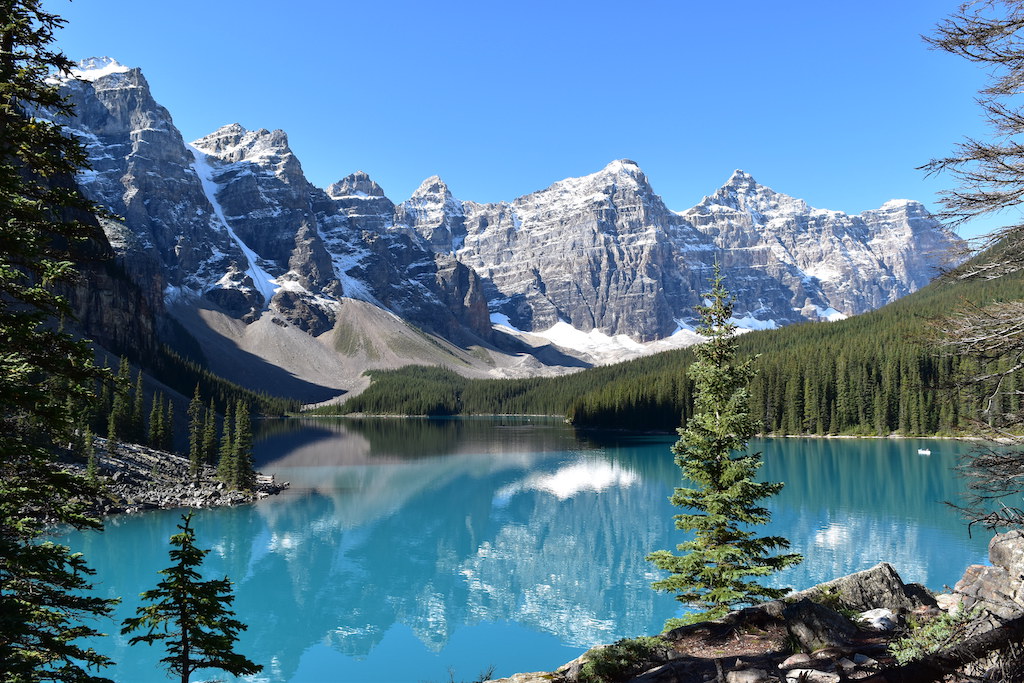 Moraine Lake and the Valley of the Ten Peaks, including Mt. Fay. Wikimedia Commons

Getrude Benham was born in London in 1867, the youngest of six children. As a child, she accompanied her father on summer trips to the Alps, where she told an interviewer she was “bitten with a love of the mountains.” Eventually, she would make 130 ascents in the range and climb some 300 mountains of 10,000 feet or higher in every part of the world, which she circumnavigated no less than seven times by steamer, rail and on foot.

She walked across South America in 1908, from Valparaiso, Chile to Buenos Aires. The next year she made her way to Central Africa, walking 600 miles from central Zambia to the southern tip of Lake Tanganyika. From there she continued to Kilimanjaro, where, in the telling of her biographer Raymond Howgego, the officer in charge of the colonial German garrison at Moshi, told her the peak “had never been climbed by any Britisher, man or woman, and very seldom by anyone else.” Benham started up the mountain at 6.30 the next morning with five porters, two guides and a cook.

The next day the party encountered the skeletons of two members of a previous expedition who had died from cold and exposure. The porters sensibly declined to climb higher, and Benham continued on her own to the summit, or thereabouts.

In Howgego’s account, “She reported: ‘My first feeling up there was that of being absolutely on top of the world.’ The highest point seemed to be some distance ‘to the left’, but as there was ‘not much difference in height,’ and ‘since the snow slope was steep,’ she decided not to make for the higher peak but instead begin her descent,” Howgego wrote. No woman would climb so high on Kilimanjaro for another 18 years when Sheila Macdonald reached the mountain’s Kibo summit in 1927. Benham, still traveling, read about the climb weeks later in a West Indian newspaper.

By that time she’d crossed Africa three times, including a 1913-14 journey that took her from the Niger River delta to Kano in Nigeria, and then by foot to Mozambique, a distance of some 3,100 miles. Walking west to east across the African continent, she was accompanied by a rotating cast of seven porters—one for each of her traveling bags. Wherever she went in the world, she is said to have carried her Bible, copies of Lorna Doone and Kipling’s Kim, a pocket Shakespeare, and her knitting.

She often sold her needlework for extra cash and was a frugal traveler by the standards of the day. She said she spent an average of less than 250 pounds a year on her journeys, which according to her New York Times obituary works out to about $13,000 in 2019 dollars—though it’s hard to imagine anyone hiring guides and porters on such a budget today. Benham was an avid collector of memorabilia and cultural artifacts, who as the Times notes, “documented her treks in journals, sketches and photographs, many of which are on display alongside her boots at the Plymouth City Museum and Art Gallery” in England.

By the summer of 1914 Benham was visiting India and the Himalaya for the third time, trekking across the mountains and passes of Kashmir. The outbreak of the First World War in October of that year confined her to England for the duration, where she established prickly relationships with the Natural History Museum and the Royal Geographical Society. “She was elected to become a member of the Royal Geographical Society in 1916, a prestigious academic network that funded and published geographical research. But she resigned within six months, after her lively descriptions of local people and scenic views rankled the society’s more science-minded writers,” according to the Times. 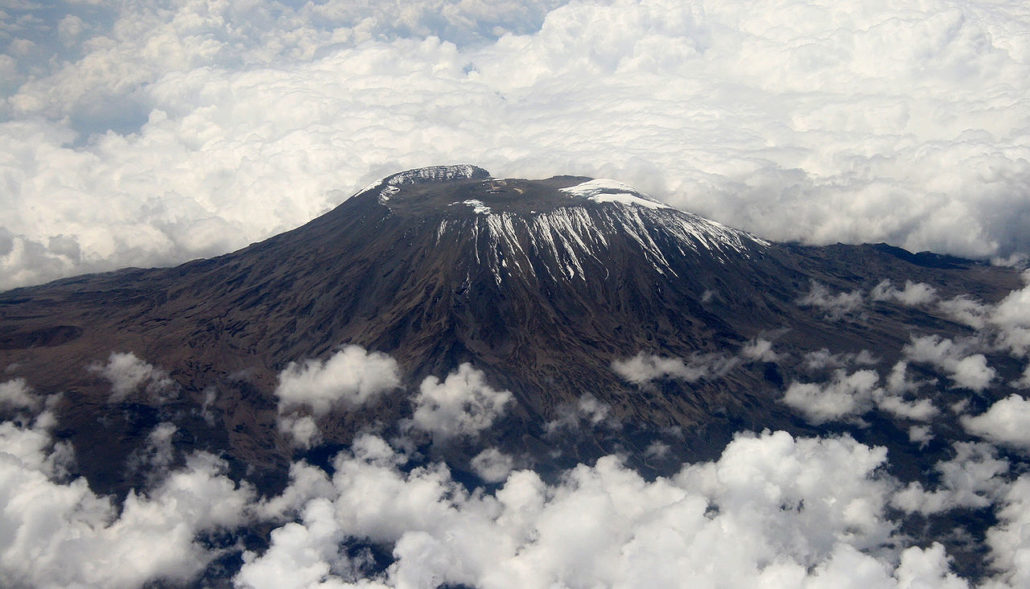 Mount Kilimanjaro in 2009, 100 years after Benham made the first female ascent to the edge of the caldera. Muhammad Mahdi Karim via Wikimedia Commons

As soon as the guns fell silent in France she was on her way back to India, making a remarkable journey arcing some 700 miles along the southern Himalaya and then continuing along the Indus River, following the old Silk Road.

She crossed much of Southern Africa in 1921 and made her way home to England, by way of Australia and the South Pacific, in 1923, completing her fifth trip around the world.

The following year Benham, now in her mid-fifties, was back in India, pressing the colonial administration for permission to enter Tibet by the remote western passes. Denied, she spent weeks poking around the border region anyway, and her repeated efforts to enter the country by the forbidden route caused authorities to create a private dossier tracking her travels and communications.

An officer proclaimed her “a thorough nuisance,” though Benham protested she was but “a very quiet and harmless traveler.” She entered Tibet legally in 1925, crossing via the conventional route at the trading center of Gyangze. She stayed for eight weeks, and then kept moving.

After a brief stop in England in 1926, she began her sixth trip around the world, visiting Natal, Zanzibar, Sudan, Egypt, Syria, India, Malaya, Hong Kong, California, Guatemala, Belize, and the West Indies and Trinidad, reaching Plymouth England in January 1928.

In 1929, Howgego writes, “she was back in the Himalaya for a second attempt to gatecrash Tibet. In this she was unsuccessful, her confidential file now bearing the damning verdict: ‘She is a bad type of British traveler to be allowed to enter Tibet.’” She tried again in 1931, camping close to the border and far from the prying eyes of government officials. Her intention was to cross into Tibet, though it’s unclear whether she did.

Benham finished her seventh circumnavigation, this one with extensive stops in South America, in 1934. Back home in England, Benham told an interviewer she had “visited every part of the British Empire, except Tristan da Cunha and a few other small islands,” and had “climbed more than three hundred peaks of ten thousand feet or over.”

The following year she set out to see still more of the world. She died in off the coast of East Africa in 1938, aged 71, two years and three-quarters of the way into her eighth trip around the world. She was buried at sea.