Climbing Mt. Whitney Taught Me That Learning How to Bail Is a Skill 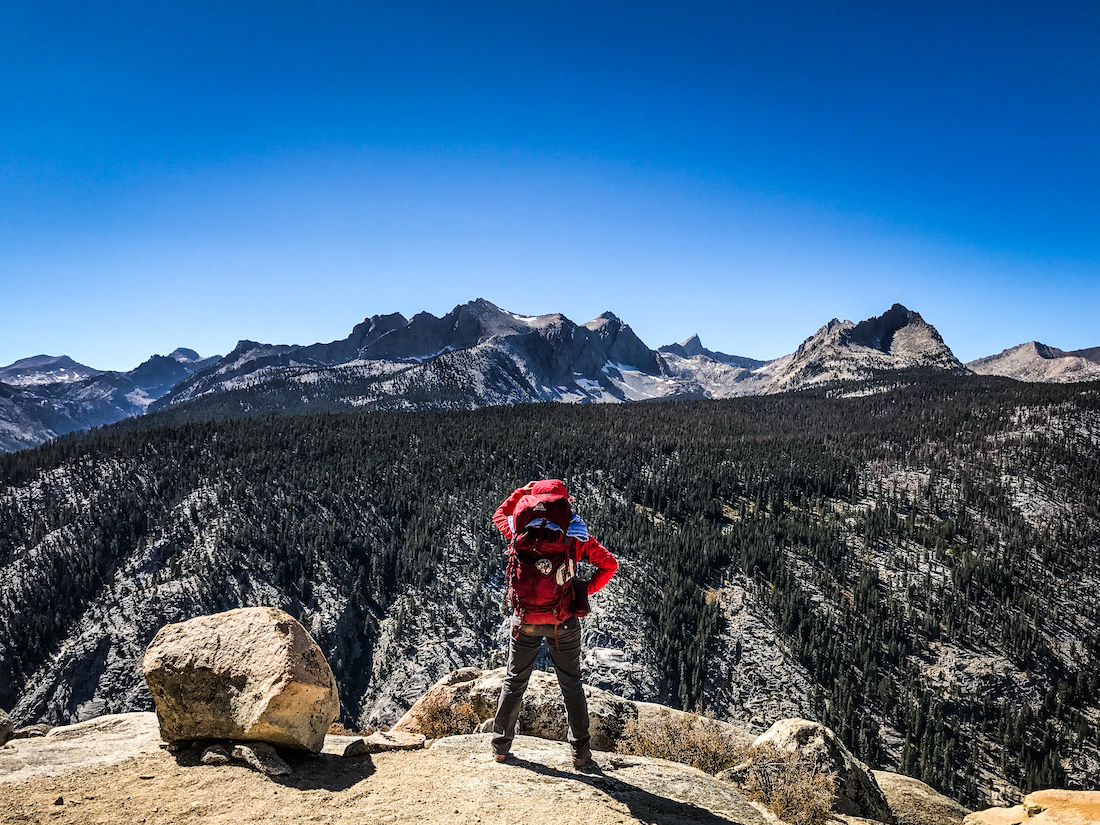 Climbing Mt. Whitney Taught Me That Learning How to Bail Is a Skill

Everything felt wrong, and the only way out was to climb over Mt. Whitney.

Wind whipped a tangle of red hair around my left ear, sending a shockwave of icy pinpricks down my spine as I crouched on a granite cliff’s edge to pee, bloody-fingered and sore. My boyfriend was hopping from boulder to boulder like an untamed marmot, screaming Tenacious D lyrics into the rocky void of Sequoia National Park. Ordinarily, I would have found this hilarious, but I was fighting a cold, and my nerves were getting raw. I squinted woozily as a raven flew overhead, twisting my neck as it soared out of view.

No one sits around a dinner table talking about how much they sobbed on the ridge of the Grand Teton, but that one time Josh fell into the lake? Priceless.

My upset surprised me, because it wasn’t like this was an unusual trip for my boyfriend and me. Our first real date, ten months prior, was hiking Cactus to Clouds, a grueling 21-mile romp from the desert of Palm Springs to the top of Mt. San Jacinto, 10,800 feet above sea level. We did it in January with ice axes, naturally. It was bliss.

Soon, we were out climbing or backpacking nearly every weekend, hauling 40-pound packs deep into the backcountry to escape the mucky haze of Los Angeles. When we weren’t on the trail, he and I spent long hours sitting on my bed in our underwear, researching topographic maps, making out, and daydreaming about glaciers.

It had been hard to find a partner who wanted to push his body to the limit as often as I did, and the bigger our wilderness goals became, the harder we fell in love. Only three months in, on a climbing trip to Zion National Park, we discussed the possibility of marriage.

He was different than my usual type. Normally, I went for bookish poets who reminded me of Bob Dylan, but he was a chatty tech bro with puppy dog eyes and perfectly carved shoulders. Our mutual obsession with mountains made up for the fact that he was more likely to recite a dirty joke than quote Mary Oliver. We were a pair of addicts when unleashed onto a trail. 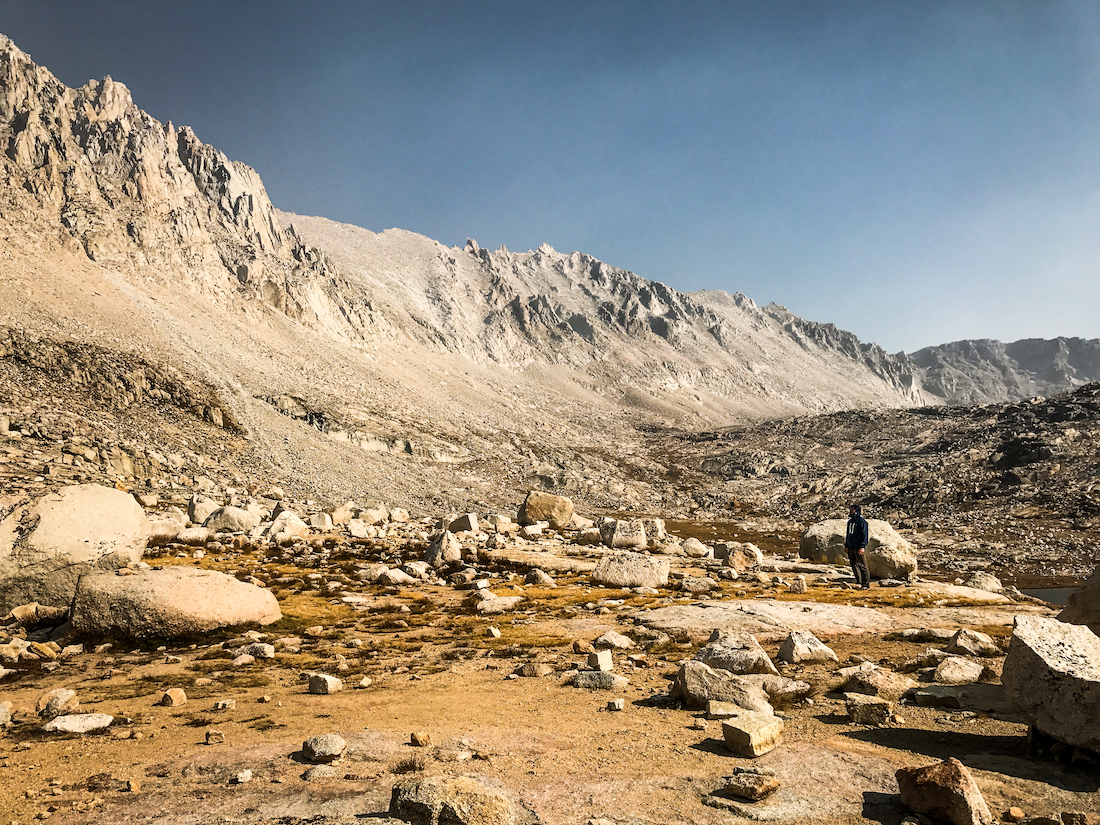 Though I went backpacking almost every weekend and had practically memorized “Wild,” I had never hiked for more than a few days at a time. A seven-day thruhike like this would require much more homework than we were used to. There were considerations to make for meals, mileage, and campsites (not to mention tent sex).

Following a month of planning and a hurried 24 hours of shuttling cars and cramming gear into our packs, he and I set off on the trail under a canopy of old-growth Sequoia trees like a scene straight out of Middle-earth. During the ascent toward our first camp at Hamilton Lake, low hanging clouds clung to the top of a cliff face that was aptly named Valhalla. I felt like I was trespassing in the living room of gods.

After a night of frigid temperatures, we crunched through shallow streams and waterfall ice as we trekked towards Kaweah Gap. In the high altitude, my brain felt like pudding, and I was embarrassed at how tired I was after only two days of hiking.

“That ridge up Eagle Scout Peak looks sick!” My boyfriend wanted to ditch our packs and climb. “Let’s just go for it!”

“We don’t have time!” I hissed back. The sun was already low, and we needed to make camp. He stared back at me like a disappointed Labrador without a ball to fetch.

We built and lit a fire before nightfall, shivering next to each other as we warmed our hands in its orange glow. After a few swigs of whiskey, he and I retreated to the tent to burrow into our down sleeping bags.

“Hey lover, can I cuddle you for a bit?” I asked. No response.

“Well… can I at least lean against you to stay warm?”

So much for tent sex – I couldn’t even get a hug. The mountains had somehow transformed my boyfriend into a massive green burrito devoid of romance. I shivered as I tried not to take it personally.

The next morning, my partner loudly declared that he was getting sick. Meanwhile, my period swooped in like a phantom and sucker punched me in the gut. We were both moody and avoided eye contact as we shoveled oatmeal into our mouths.

We didn’t talk for our first 2 hours on the trail.

The following days weren’t much better. My partner and I plodded along, cold and miserable, more like co-workers than loving adventurers. I thought I could power through, as I had on other challenging trips, but on the morning of the fifth day, a lingering hug set off a nonstop sobfest that didn’t let up until sundown. The combination of the cold, the loneliness, and the physical exertion caused the levees of whatever tension I had been holding onto for far too long to collapse.

I always thought I was the tough girl who liked camping. I wore my scabs like merit badges and daydreamed about sleeping in the dirt. But, for the past year I had been pushing myself to the limit with my boyfriend, and I never felt tough enough.

On our romantic trip to Zion National Park, my boyfriend had rolled his eyes at me when I refused to free solo a 20-foot sandstone chimney on our way to the top of The Watchman. Only 48 hours earlier, we’d discussed marriage, and then, after a full day of climbing, my partner was pissed that we were retreating only 200 feet from the summit.

Not long after that, I’d had my first-ever panic attack during another adventure. My boyfriend wanted to convince me that I could tackle bigger peaks, and I desperately wanted to impress him. So, we’d agreed to climb Split Mountain even though the snowpack was twice what it should be in June. After hours of climbing in an avalanche zone, my nerves got the best of me. I couldn’t stop shaking as I envisioned tons of snowy sludge pummeling my body.

In his mind, he was pushing me to improve as a mountaineer, but each time I surpassed what I believed to be the brink of my physical ability, it felt tainted with disappointment. Why did I keep climbing for so many hours only to turn around when the summit was in reach?

And here, on the High Sierra Trail, it felt like the pattern was repeating. Had I not been over 20 miles and 5,000 vertical feet from a warm car, I could imagine myself ceremoniously pressing the eject button on the whole trip.

We reached the 14,505-foot summit of Mt. Whitney with little fanfare, my boyfriend sprinting about, immediately fixated on the mountain’s more difficult, technical climbs. While the trek hadn’t been “hard enough” for him, my weary body was ready for the creature comforts of warm pizza, cold beer, and a hot shower. I was done. For over an hour, I simply stared out at the arid expanse of the Owens River Valley, thousands of feet below. I knew something needed to change. 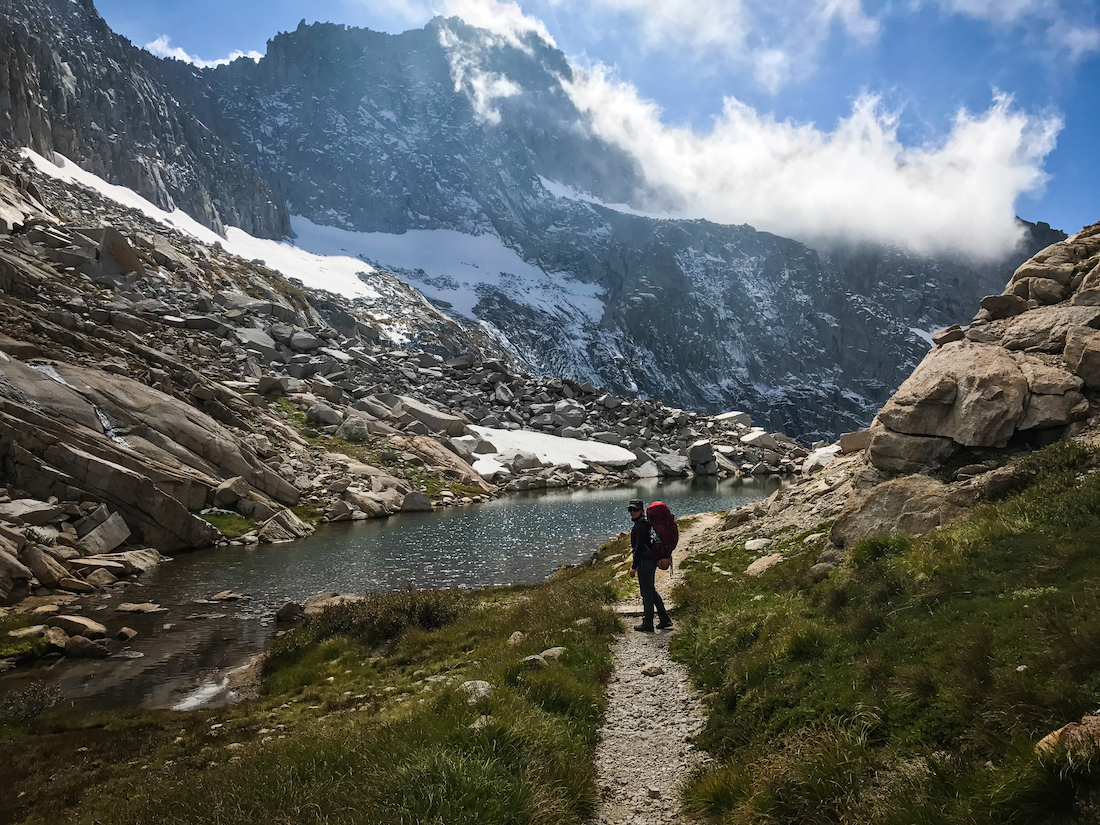 We often say that love is hard work, and that a good partner will challenge you to be better than you were before. But what happens when you aren’t up for the challenge?

I had always prided myself on my capacity to endure physical and mental distress. My ability to endure marathons of discomfort was what made me a mountaineer, after all. I realized I’d applied this same mindset to my personal life too. I thought that by sticking out the sufferfests and keeping my mouth shut, I was proving my strength.

But relationships are meant to be enjoyed, not endured. The whole point of venturing into the outdoors with your friends is to sustain a sense of wonder and to have fun. No one sits around a dinner table talking about how much they sobbed on the ridge of the Grand Teton, but that one time Josh fell into the lake? Priceless.

It took me ten months of feeling woefully inadequate, but on the summit of Mt. Whitney I finally understood that it was ok to say no. It was ok to speak up when I wanted to bail, and it was definitely ok to start setting clear boundaries about what epics I did and did not want to endure.

I knew I loved mountains. Just not like this.

Two months later and newly single, I treated myself to a solo trek up the summit of Mt. Baldy. Wind kissed my cheekbones until they turned a bright shade of pink, and I closed my eyes, meditating on the gentle throb of my pulse as it navigated my body from ventricle to fingertips. I was a beautiful jumble of blood and muscle and peak-bagging prowess. I felt graceful and strong without the baggage of my failing relationship weighing me down. I felt free.

There was no one to impress but myself.