How the Daughter of Vietnamese Refugees Founded ‘Brown Folks Fishing’ 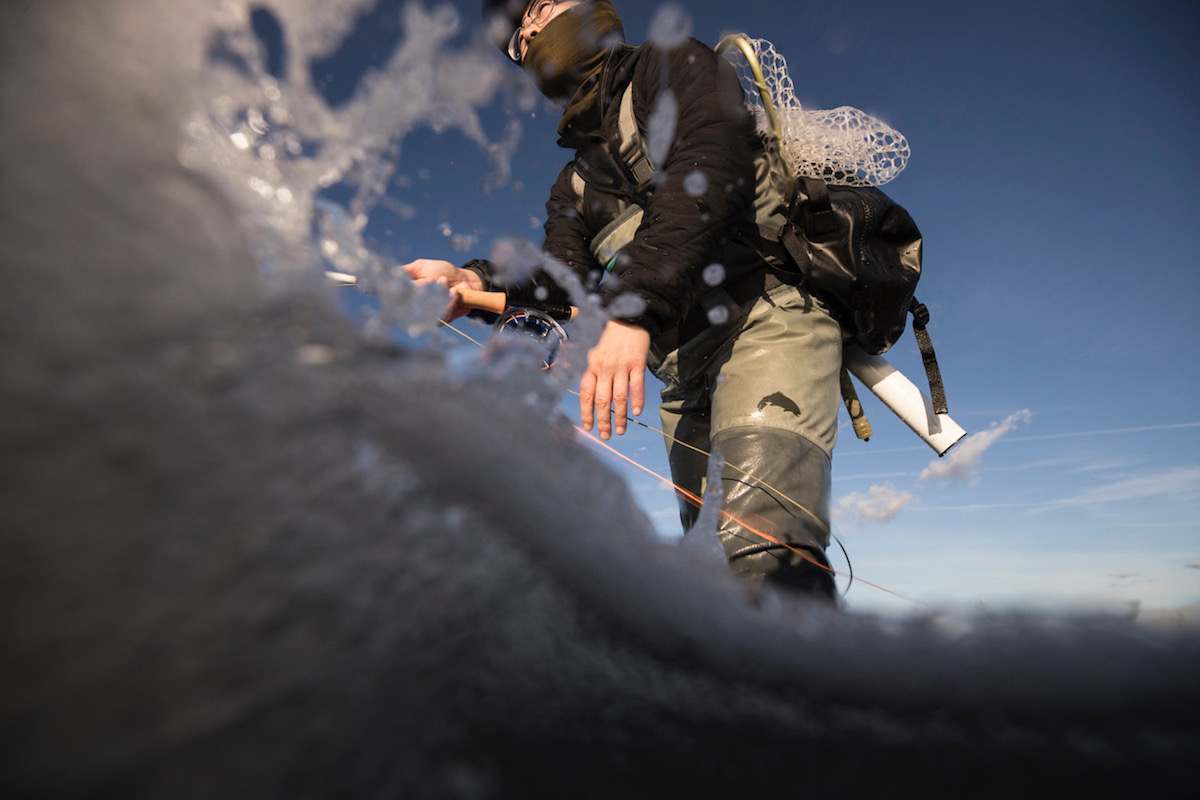 How the Daughter of Vietnamese Refugees Founded ‘Brown Folks Fishing’

In late January, Tracy Nguyen-Chung posted a simple photo on Instagram of an unidentified, puffy-clad angler perched on a snowy riverbank. Almost a full year later, the same account—Brown Folks Fishing—is stocked with images. There are plenty of fish, of course, from the toothy maw of a blue-tinted lingcod to a whiskered carp plucked from the Los Angeles River, but it’s the people grinning alongside these catches that Nguyen-Chung really wants you to see.

“We are a community of anglers of color. Our goal is to encourage more people of color to explore and connect with the outdoors through fishing,” begins the caption for Nguyen-Chung’s inaugural post. She didn’t realize it at the time, but the Instagram account served as a stepping stone to what would become Brown Folks Fishing’s greater mission to not only increase visibility and community for BIPoC (Black, Indigenous, People of Color) anglers, but also effect lasting structural change within the fishing industry while inspiring a new generation of conservationists.

Nguyen-Chung, a publicist, creative director, photographer, and documentary producer, is the daughter of refugees who fled the Vietnam War. Among the things her parents carried along to their new home in Portland, Oregon, was an intrinsic connection to the outdoors. Nguyen-Chung recalls family campouts complete with large potluck meals, an affordable means of recreation in lean times. But perhaps even more so, she remembers learning how to fish from her father, who grew up doing the same back in Vietnam.

“Getting more diverse folks together and on the water is really a gateway to conservation,” she says. “Throughout all of our work with Brown Folks Fishing, everything has a conservation component, because it comes back to our survival.”

While she caught her first fish, a sturdy rainbow trout, when she was about six years old, Nguyen-Chung dropped the pursuit as a teenager. It wasn’t until she later moved to Los Angeles that she decided to revisit the sport. “My friends and I would just go to the pier because we could fish in California without needing to buy a license,” she says. Nguyen-Chung is an advocate for licensing fees as a source of conservation funding, but was strapped for cash at the time having just finished graduate school. “I was looking for a way to not only get outside, but also socialize and be with my friends, and explore a little bit of that hobby that I had a lot of passion for when I was young.”

To outsiders, Los Angeles might seem an unlikely place for an angling hobby to flourish, but enthusiasts of all stripes test their mettle in local waters, so Nguyen-Chung was never short on opportunities to indulge. As her fishing stoke grew, however, she eventually longed to spend more time outside, and in a different way than she had in the city. Nguyen-Chung returned to Portland after six years in Southern California, arriving back home with a new perspective on both fishing and life.

“I had done my graduate work in conflict resolution and restorative justice, and was informed by a deeper understanding of conservation and environmentalism and social justice,” says Nguyen-Chung. “I came back here and got back into fishing with a really intersectional lens of what that meant—and what that meant for me as a queer-presenting woman of color fishing in Oregon.”

As Nguyen-Chung started exploring further afield of Portland, she began to notice that she and her friends were often the only anglers of color, something that sat contrary to her personal experience and knowledge that there are many places where people of color actually dominate local waterways. So she created channeled her energy into creating Brown Folks Fishing. “I wanted to sort of send up a flare and see where the other anglers of color were, and try and get together and fish,” she says. “And then the other piece was just to create a space that very intentionally surfaced and centered the faces of anglers of color, particularly black and Indigenous folks.” 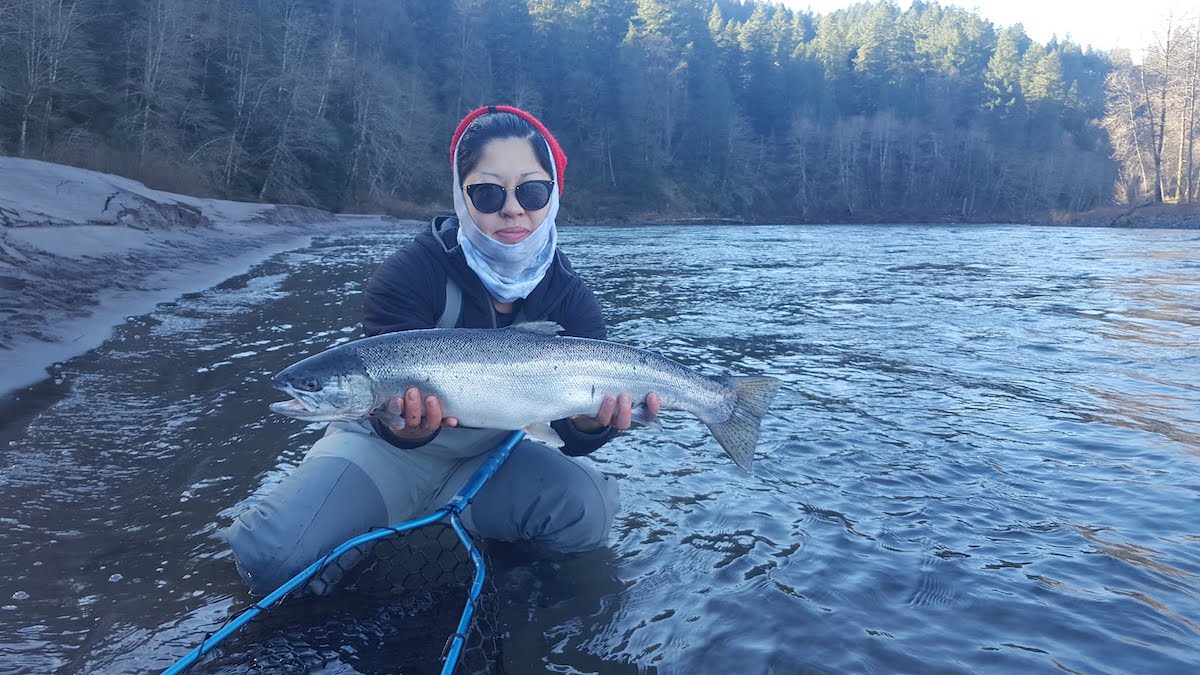 “My first winter steelhead,” Nguyen-Chung says. “The missing adipose fins indicates that this is a harvestable hatchery fish.” Photo: Nguyen-Chung

While the Instagram account is the most visible of Brown Folks Fishing’s initiatives, Nguyen-Chung has steadily grown its influence beyond that medium. There’s now a private Facebook page that serves as an open, non-judgmental forum for questions and conversation among anglers of color. Orvis has become a trusted partner after engaging in dialogue with Nguyen-Chung when she detailed her experience being on the receiving end of unconscious bias from a sales rep at one of their retail locations. She has also grown a robust team of ambassadors, not just to help create educational, inspirational, and mission-driven content, but also to conduct events, build partnerships, create gear libraries, and mentor would-be anglers around the country. And she’s raising money for a scholarship program that will not only help new anglers afford crucial gear and licenses, but also fund creative projects that will consider “the intersection of race, fishing, and the environment.”

While all of these elements work to reduce barriers to access, perhaps the more difficult task is effecting deeper change to reimagine a fishing industry that is a true reflection of the people who love the sport. “I think change has to start internally, especially with bigger companies, boards, and executive suite officers choosing to do coursework in, for lack of a better term, cultural competency,” says Nguyen-Chung. “It has to start at the top and trickle out to all other aspects of a company, and it has to be a commitment at that level in order for things to really take root.” 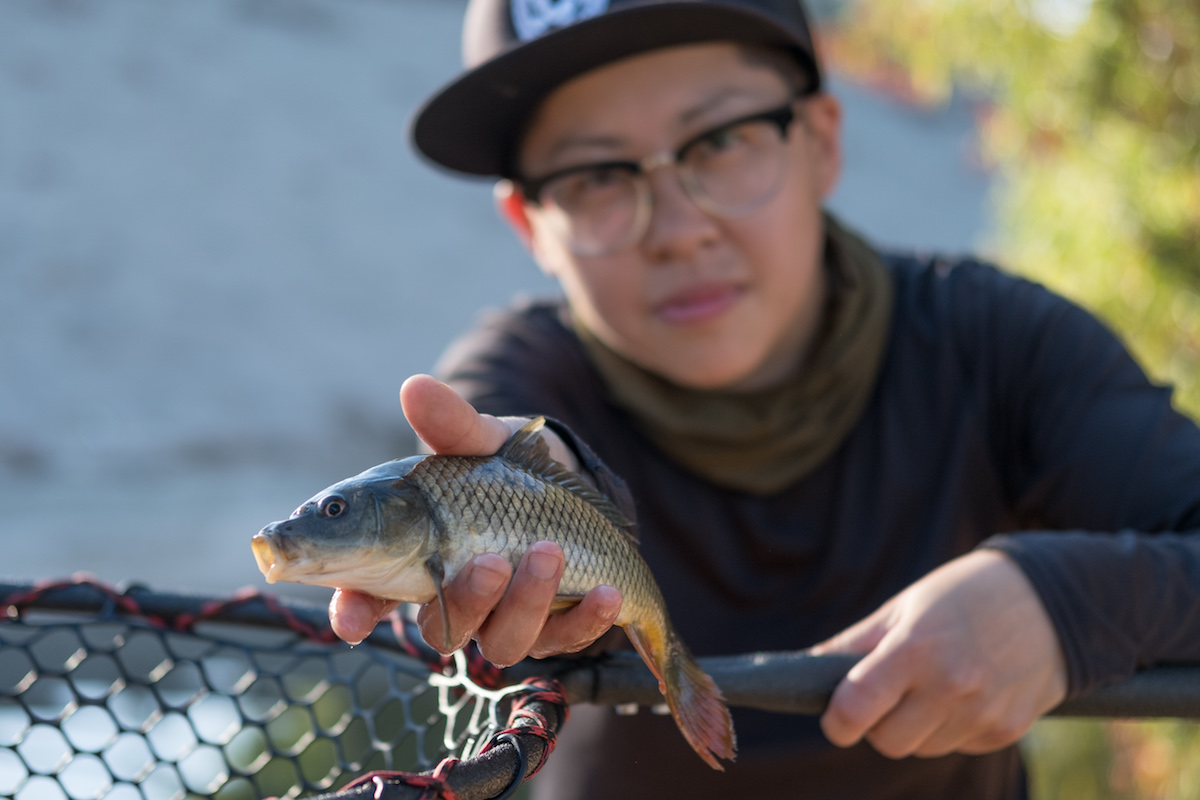 While this type of change can be slow, Nguyen-Chung believes that it is, indeed, possible. She is a member of Diversify Outdoors, a coalition that harnesses the power of social media to engage in advocacy and movement-building around issues of equity and diversity in the outdoors. In addition, inspired by the Outdoor Industry CEO Diversity Pledge created by African-American Nature and Parks Experience founder Teresa Baker, Nguyen-Chung plans to launch what she’s calling the Angling for All Pledge. This will serve as a commitment by angling industry professionals—from independent fishing guides to major brands—to actively work on dismantling their own unconscious biases while also addressing structural inequities within the industry to ensure the sport is truly welcoming and inclusive, from the banks of pristine brooks to the conference tables of powerhouse boardrooms. The hope is that signees would adopt both pledges.

Beyond providing a platform for storytelling, community-building, and change-making, Nguyen-Chung has a larger goal in mind for Brown Folks Fishing. “Getting more diverse folks together and on the water is really a gateway to conservation,” she says. “Throughout all of our work with Brown Folks Fishing, everything has a conservation component, because it comes back to our survival.”

Above all else, Nguyen-Chung is hopeful. “I do think there’s a shift happening. There are companies, guides, and other anglers who share these ideas and these beliefs,” she says. “There are co-conspirators out there that have been helping us along the way and supporting our work. We’ve seen it and it exists. 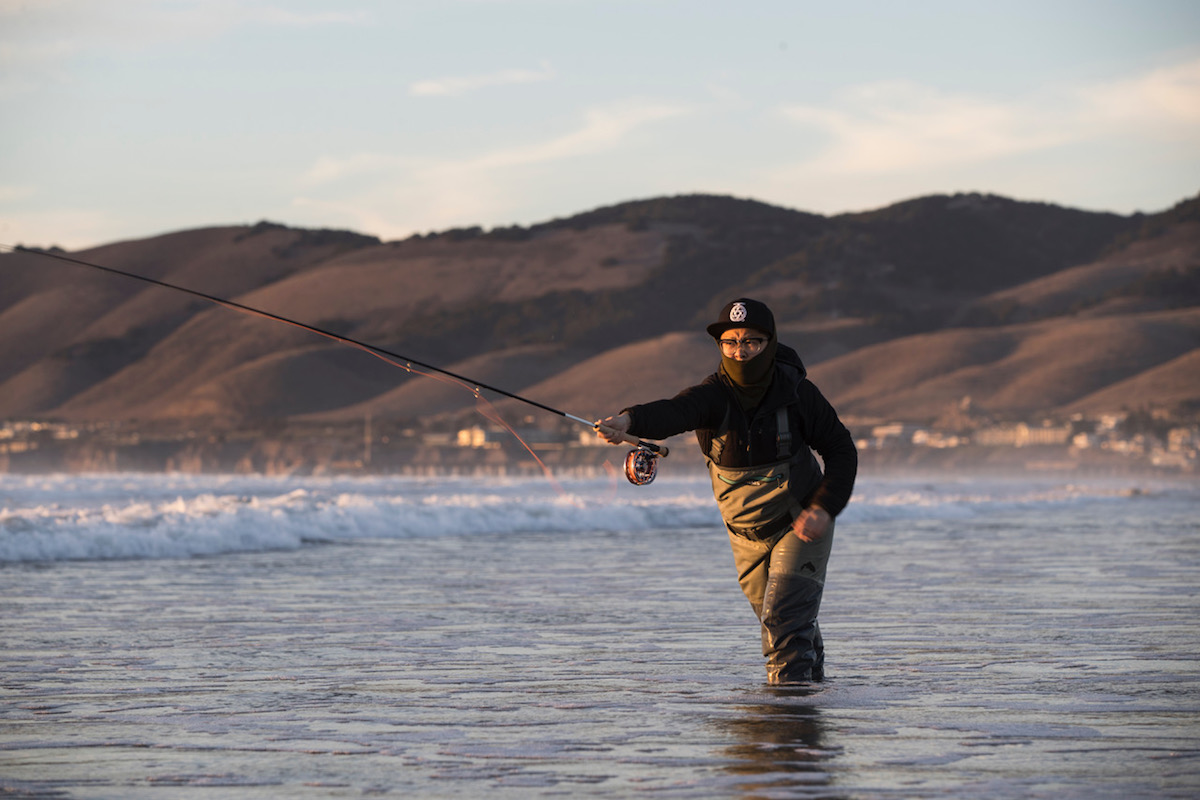