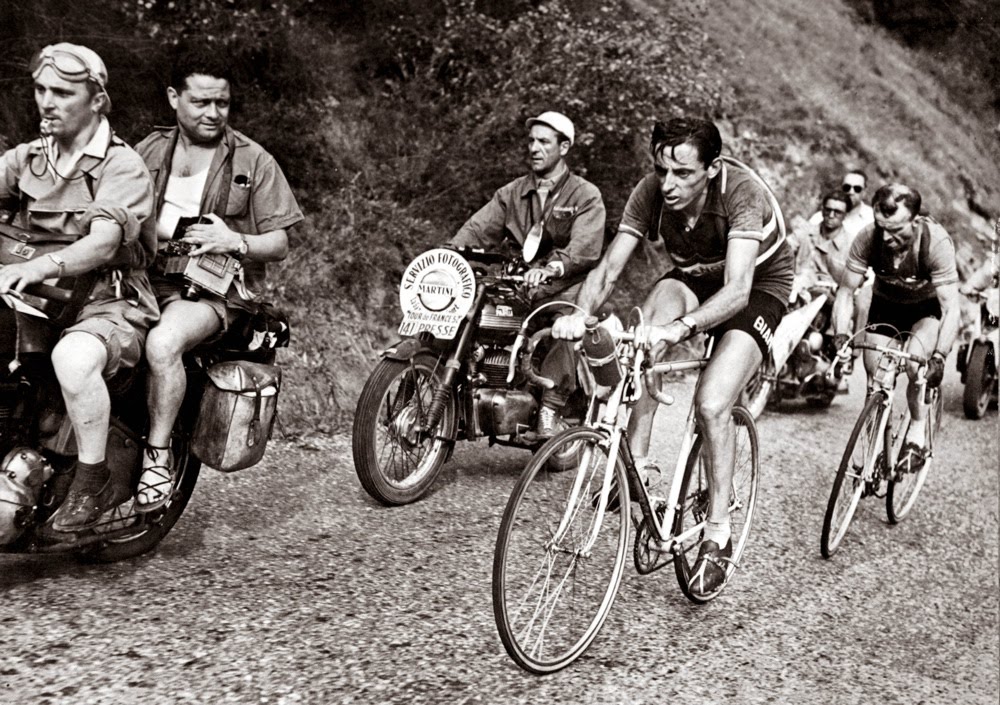 He is one of the most decorated cyclists of all time. He is the only Tour de France rider to have won the first Tour he entered, as well as the last. He won the Giro d’Italia five times, was the 1953 world champion, and he held the hour record for 14 years. His list of cycling accomplishments reads more like the pie-in-the-sky dreams of an ambitious child than the real life of a butcher shop boy from Castellania, Italy.

He is Fausto Coppi, and the “best cyclist of all time” doesn’t sound like hyperbole when it follows his name.

No one’s life story is as tidy as the numbers that validate our accomplishments. Coppi’s was no different. Amidst social scandals, World War II, performance enhancing drugs, and an Ali/Frazier level of rivalry with Gino Bartali, Coppi’s genius on a bike managed to transcend the frequently dirty business of living in the public spotlight.

Born in 1919 in the Piedmont region of Italy, Coppi took to cycling in his early teens. He was a scrawny and quiet kid, more apt to spend time alone than to socialize with friends. Long days on the bike in the shadows of the Dolomites would serve him and his legacy well. The Italian could spin, climb, sprint, and time trial with equal panache. 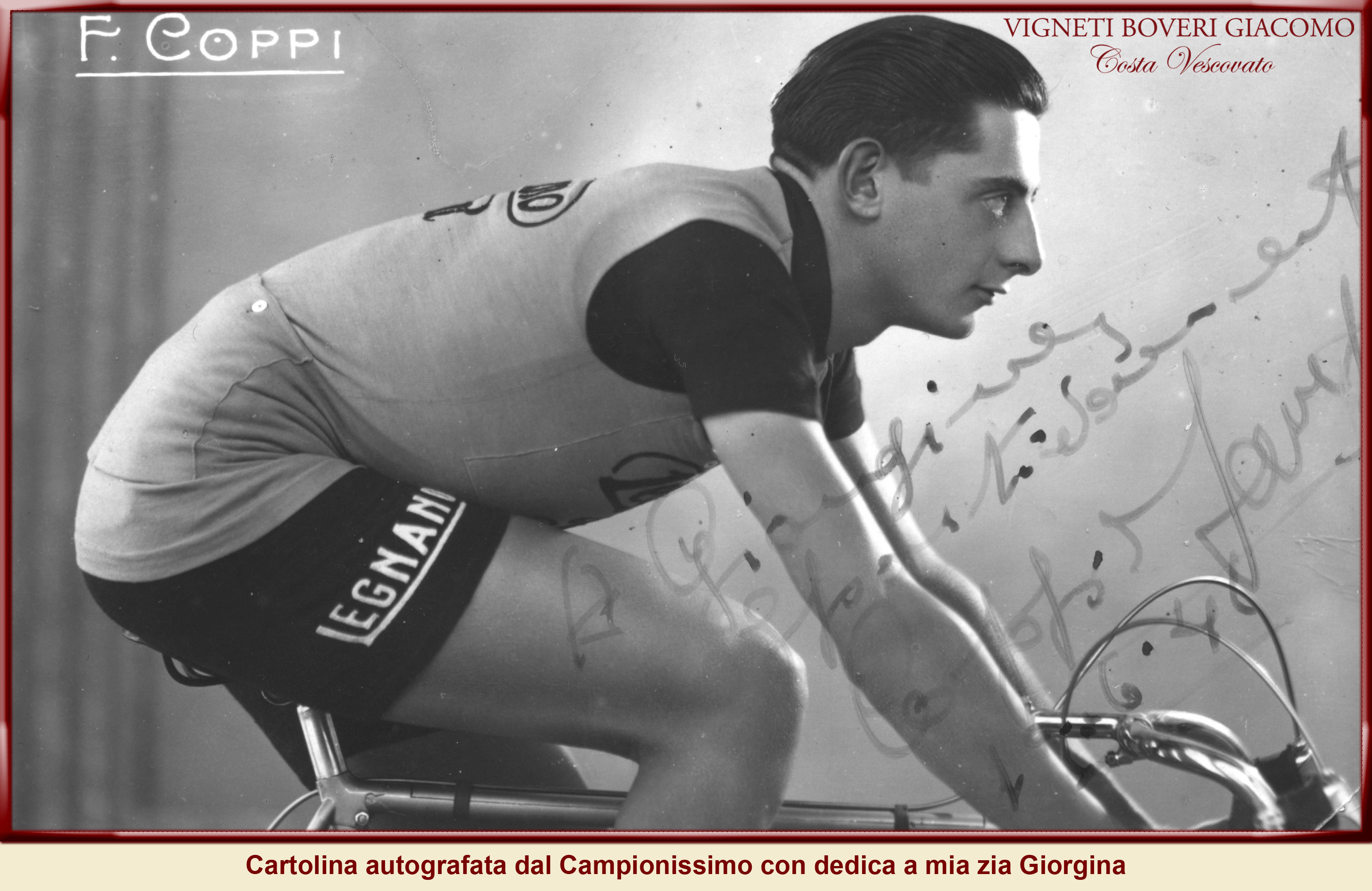 With a few years of amateur racing under his belt, Coppi was “discovered” by blind masseuse-cum-cycling oracle, Biagio Cavanna. Following Cavanna’s strategic coaching, Coppi transitioned to pro races without so much as a hiccup. In 1940, at the age of 20, Coppi took home the maglia rosa (pink winner’s jersey) of the Giro d’Italia. It was his first Giro, and his record as the youngest winner ever still stands.

The unabashed favorite going into that year’s Giro was Bartali, for whom Coppi was initially brought on as a domestique. Some say Bartali lost hope for a win after a tough crash and ceded the team leader spot to Coppi. Others insist that a capable and ambitious Coppi was working only for himself the whole time. Opposites in every way – from background to beliefs to training methods – Coppi and Bartali’s rivalry became legendary. Italians chose sides as fervently as they chose sides regarding the political turmoil of pre-World War II Europe. The men would never conciliate, at least not publicly.

Whatever personal costs the rivalry may have inflicted, it didn’t dampen Coppi’s career in the least. Following his rookie win in the Giro, he pedaled into a 12-year reign of dominance. An incomplete sampling of Coppi’s wins:

The notable gap in results from 1943-1945 is explained by World War II, when Coppi joined the Italian army. While serving in North Africa, his entire unit was held in a British prisoner of war camp for nearly two years. Famously, Coppi trimmed hair for the Brits and fellow prisoners alike during his time there. 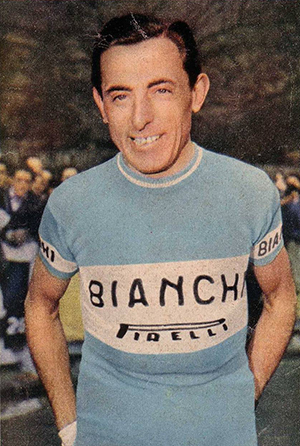 When Coppi returned to racing after the war, his dominance grew even stronger. Most cycling historians, and those lucky enough to have seen Coppi ride, tell a similar story of natural talent. His grace, skill, and stubborn drive to win were palpable. And win, he did. There are tales of the peloton never catching him on a single breakaway from 1946 through 1954. The veracity of that claim is up for debate, but Swiss timing doesn’t lie. Coppi would regularly win races by 10 to 15 minutes.

His reign in cycling was not without some controversy. In a precursor to the scandal-plagued doping schemes of today, Coppi openly admitted to partaking of “la bomba,” an amphetamine/caffeine drug cocktail, which he asserted most cyclists were taking, too, in order to meet the excruciating physical demands of the sport. On the other hand, he publicly acknowledged the hazards of the practice.

In today’s context, Coppi’s chemical practices tarnish his legacy at least a bit. But his dominance was not one-dimensional. The pure magic of a human being stumbling into their athletic destiny and pushing it unrelentingly forward cannot be denied. He had half of Italy rooting against him; he had the Pope (yes, the Pope) intervening in his marital troubles; he had a string of broken bones and health issues; he experienced personal tragedy and political strife. Still, he sat on his bike and he rode like few others every have or ever will.

There have been many champions over the years. Heck, riders can earn the moniker for a single win. But only Fausto Coppi has earned the nickname, il campionissimo: the champion of champions. That is badass.