Why Food Tastes Better Outside 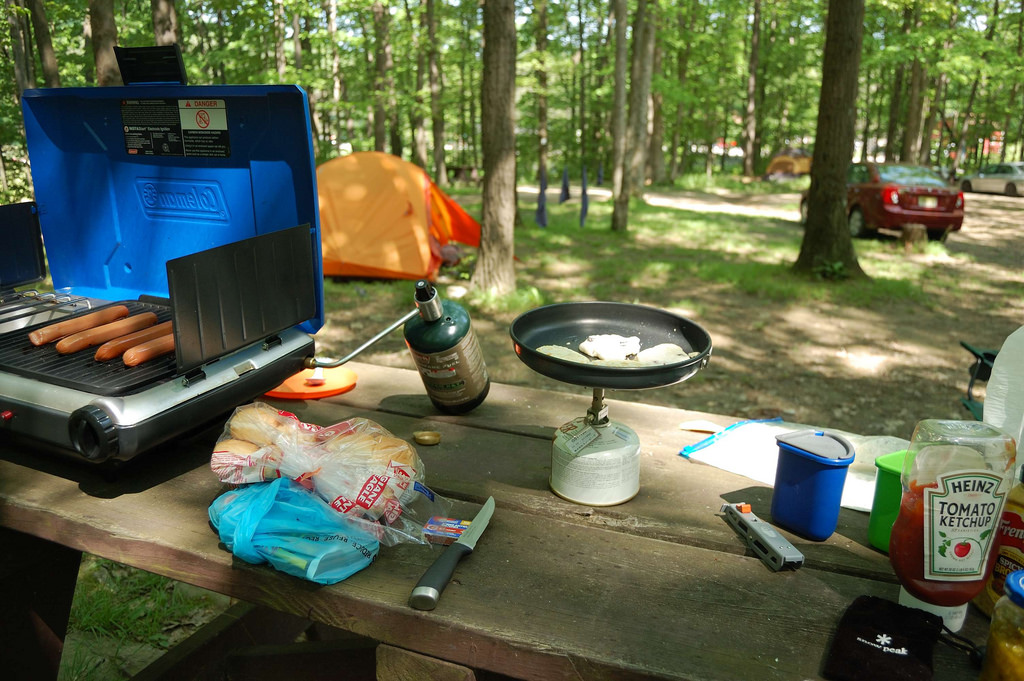 Why Food Tastes Better Outside

I am not a great cook. Nor am I an experimental cook. But I am not a bad cook, either. It’s not laziness. It’s convenience. I have a handful of dinner recipes that are my go-to’s, typically revolving around sketty or stir fry or the barbecue, and it’s either oatmeal or Mexican eggs in the morn. I just don’t venture to far, or really at all, off my well-worn, worked-in path of habit in the kitchen. I try to keep everything as healthy and as tasty as possible when I am at home. But I’ve found that around a campfire or when using the two-burner stove, whether it’s a PB&J, a steak, a crawfish boil, or a cup of red paint can Folgers, everything tastes better outside.

Psychologists have found that our physical sensation and emotional response is greatly improved by the power of our perception and our environment. For example, when someone we feel admires us prepares a meal, our brain makes that meal taste better. When that same meal is prepared in an area we feel connected to, like the house we grew up in or our favorite camp spot for instance, our brains make our taste buds do backflips. Think about it. Taste is a combination of smell, taste, and texture. Combine the relaxing slink of your favorite camp chair with the aroma of a campfire, the feel of bare feet in dirt and clay with a summertime breeze slipping off an undulating river, mix well with sentiment and memory, and even a raw hotdog can taste like filet mignon.

Jerky and chocolate is just a notch or two above a loser lunch, bologna on hand. But that dinner was one of the best, most memorable of my life.

Once I ate a beef jerky dinner in a sketchy campsite outside of Seward, Nebraska. My best pal ScottyP and I were driving across the country, moving from the Midwest to Telluride, Colorado. It fire hosed rain as we shared a chocolate bar and tried to fit both of our 6’5” frames in my two-person tent. On the surface, it’s a pretty mediocre meal. Jerky and chocolate is just a notch or two above a loser lunch, bologna on hand. But that dinner was one of the best, most memorable of my life.

Last summer, I cooked Zatarain’s jambalaya over a campfire in a friend’s cast iron kettle on a tripod stand. I cut up peppers, an onion, two Hillshire Farms smoked sausages, and a few secret ingredients while listening to the frothing roar of the Animas River. I tried to recreate that meal in my kitchen this winter. It wasn’t even close. And even with the “whole bean or get out” coffee snobbery I’ve grown into recently, Alpine Start instant coffee tastes like it was prepared by a skinny jean wearing hipster super hero barista when I’ve mixed it up in my thermos outside my tent.

Whenever I return home to Chicago, I hit up my favorite restaurants. I zip down a few blocks from the house I grew up in to North Avenue for a combo from Johnny’s Italian Beef. I’ll order a spinach and sausage deep-dish pizza from Giordano’s and smash a mint chocolate chip shake from…anywhere. Mickey’s has the greatest chicken on pita in the universe. Blue Max (aka The Lathrop House) has been the scene of many a tasty breakfast. And those are just in my hometown. When I get into the city, anything within eyesight is in trouble.

Once my lifelong bud Jay treated me to a dinner at Hugo’s across from Gibson’s on Rush. Because of company, conversation, and the absurdly delicious seafood, it is among the top five meals of my entire life. But it’d be number one if it took place on a paco pad next to a creek. The number one spot is a tie between the last minute sketty meal my pops and I cooked on the back deck of our cabin in Wisco and the oatmeal and hot chocolate breakfast I shared with my niece and nephew a few days later out in the field. Both were prepared on my two-burner.

Time spent outdoors can reduce stress, improve mental health, and have drastic positive effects on our cognition and behavior. And it can also make mediocre grub taste like a Michelin-starred meal typically reserved for the gods or super rich fancy people. Do yourself a big favor. Get out, get rad, and eat a meal. It’ll taste better out there and most likely make a memory you’ll talk about for years. The perfect meal is out there, waiting for you, right next to the campfire. And it’ll probably involve hot dogs.

Wanna be a camp cook pro?

The Sea to Summit Alpha cookset is everything you need in terms of cookware and serving dishes/cups, in one nesting package that is perfect for car camping. We’re big fans. $130