How to Thrive in a Roof Top Tent 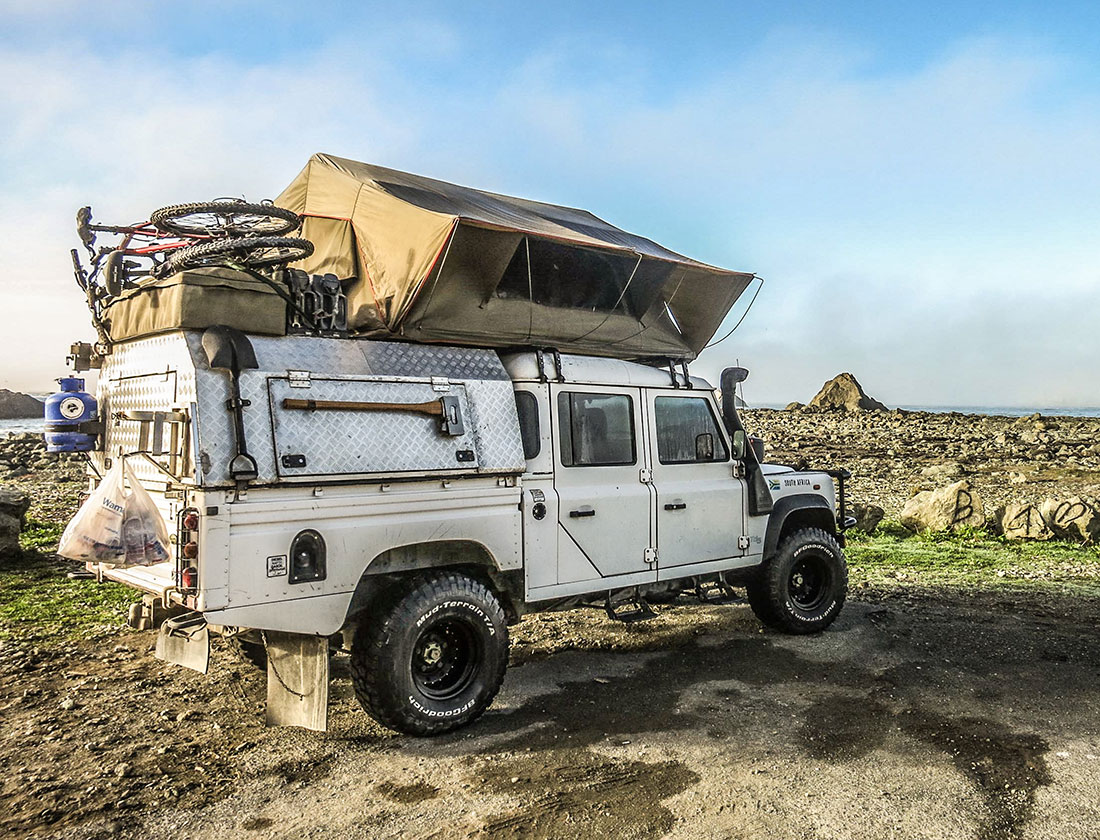 How to Thrive in a Roof Top Tent

With a roof-top tent (RTT), any vehicle instantly becomes a home. There are no major modifications that need to be done to the vehicle other than adding load bars or a roof rack. An RTT also does not hinder the vehicle’s off road capability significantly. We have only ever overlanded with an RTT and we are a family of four.

We love our Howling Moon RTT, so it’s fair that we acknowledge how indestructible their product is. Our first weekend overlanding in South America we were hit by a cyclone and were stuck in the tent for three days while the wind howled and the rain pelted. With the annex attached we had a decent space to spend the days playing cards, cooking, and waiting out the storm. The tent itself did not leak despite the constant assault of the storm, and it was only when the trees in the forest next to our camp started to fall that we decided to find safer lodging. That is one tough tent.

We spent 80 percent of the next three years sleeping in the tent and it is good for at least another three years, partly because of the excellent construction and partly because we coated every inch and seam with plenty of Scotchgard canvas sealer when we first got the tent. The weakest parts of any RTT are the rain fly, the zips, and mosquito netting. It’s a good idea to carry spares if you intend to travel for long periods. 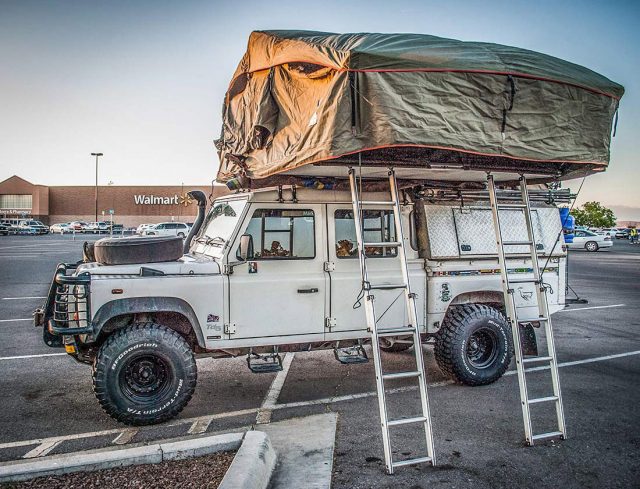 Here are a few tips for the operation and maintenance of an RTT, which will also clearly demonstrate the pros and cons of sleeping on top of your car:

Be tall. Short people can really struggle with a RTT, especially if it is perched on top of a tall vehicle.

If you have a travel companion work as a team to open and close the tent.

When opening the tent roll up the cover and wedge it under the base of the tent. you can install special straps to hold it in place. By rolling the cover up and keeping it out of the way you will protect it from the elements and reduce your frustration while trying to access whichever door or window the cover may block. 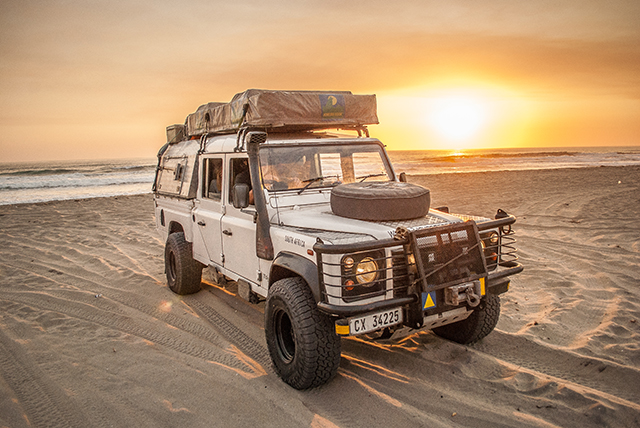 Make sure your vehicle is parked on a level surface so as to avoid a slow roll out of the tent at night. Carry either plastic leveling blocks or a couple of blocks of wood for this purpose.

Tie a plastic bag to the ladder for your shoes.

The midnight/early morning pee can be a real pain when sleeping in an RTT. One solution is to keep a designated pee bottle in the tent. The other is to attach a funnel to a length of hose which runs out of the tent into a bottle on the ground. If you ever see someone using the funnel/hose/bottle do not clamp the hose. This is not a funny prank.

For lighting you can install LED lights in the tent with minimal fuss or use solar lights. Use lamps with a soft glow.

Ditch the sleeping bags and inflatable pillows and use down duvets and pillows, you will be much more comfortable. When closing the tent fold the bedding into the half of the RTT above the vehicle and compress as much as possible being sure to not let the bedding interfere with the tent poles when closing. 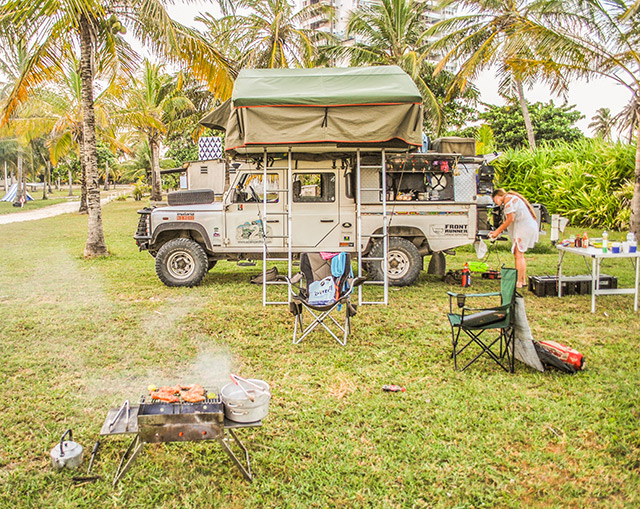 If possible, have the manufacturer install two large YKK zips on the tent cover, this way you can easily zip from two directions and if the one zip breaks you will still be able to use the other for the complete zip-able area.

When closing the tent have one person tuck the tent fabric in while the other lifts and lowers the other half of the tent using the ladder for easy leverage.

Throw away the horrible Velcro straps that come with the tent and attach a couple of ratchets with corresponding straps.

Flip the cover over and pull firmly over the edges of the tent then throw the ratchet straps over (weighted with a tin cup or similar if the wind is blowing) and then ratchet the tent closed. By using the ratchets you will be able to compress the bedding inside the tent and therefore be able to zip the tent closed with much less effort. Be sure to relieve some of the tension in the ratchets once the tent is completely zipped. Over time the ratchet straps will damage the tent cover, it may be a good idea to glue or stitch some extra material over the rubbing points.

If the wind is being uncooperative, move the vehicle (with the tent open and the ladders lifted) so that the wind works in your favor. 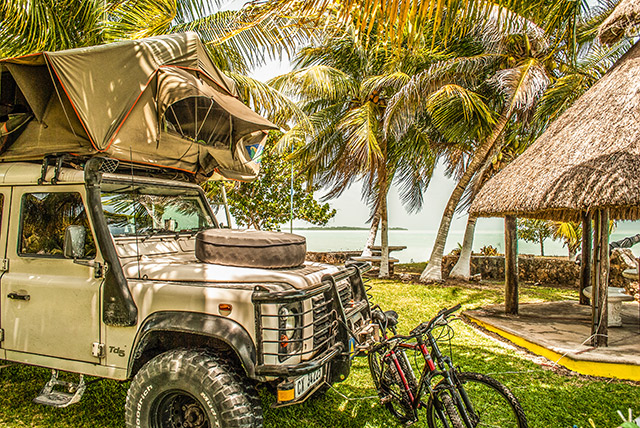 Count the window pegs before putting them away.

Dealing with damp: There will be days when you get caught by bad weather. You have two options when touring with an RTT: either wait out the weather or try to drive toward better weather. If it is raining or snowing for a week in all directions you may have to wait it out. Many mornings the tent will be covered in dew and you will need to wait for the sun and wind to dry it out. We have always been early morning people, but since we started traveling longterm we have begun to get out of bed late in the mornings, sometimes only showing our faces after 9 am. Initially I thought we were just becoming lazy overlanders but then I realized we began sleeping late to let the tent dry. What else do you do in a tent but have a snooze while waiting for the sun to rise and dry the tent? (That’s my excuse and I am sticking to it.) Usually the tent will dry while you go about your morning routine.

If rain is persistent and you need to get on the road, wait for a break in the deluge then use a towel in need of washing to dry the tent as best you can before closing it.

Try to close the tent only when it is dry and open the tent as soon as possible if it was closed wet. The dampness will destroy the tent and bedding if left closed for a significant period of time. 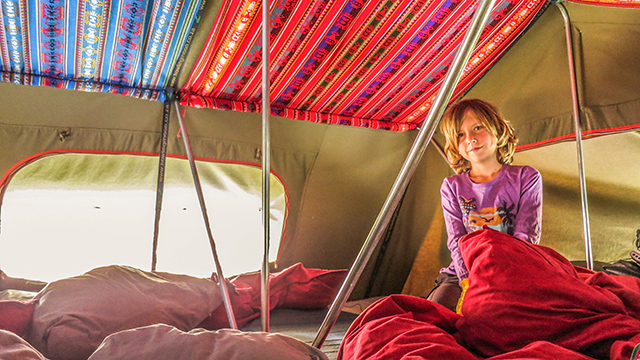 Condensation in the tent can lead to a special type of water torture as drips form on the inside of the tent, roll down the canvas, and drop onto your face or eye or ear. To combat the condensation, we installed two highly absorbent Peruvian sheets of colorful Alpaca wool over the interior support poles of the tent. The sheets not only absorb the moisture but also give the tent a less militant, more homey feel.

Taking care of your roof tent will ensure that it will last for many years and, with time, there will probably be nowhere else you would rather lay your head.

Writer and photographer Graeme Bell is a full time overlander and author of We Will Be Free, a declaration of independence and Travel the Planet Overland, a guide currently on Kickstarter. He was born in Johannesburg, South Africa but considers Cape Town home. He is currently traveling the planet with his wife, Luisa, and two children, Keelan and Jessica, in a Land Rover Defender 130 affectionately known as Mafuta. www.a2aexpedition.com.

ADVENTURE JOURNAL QUARTERLY IS IN STOCK! GET IT NOW–$15!! 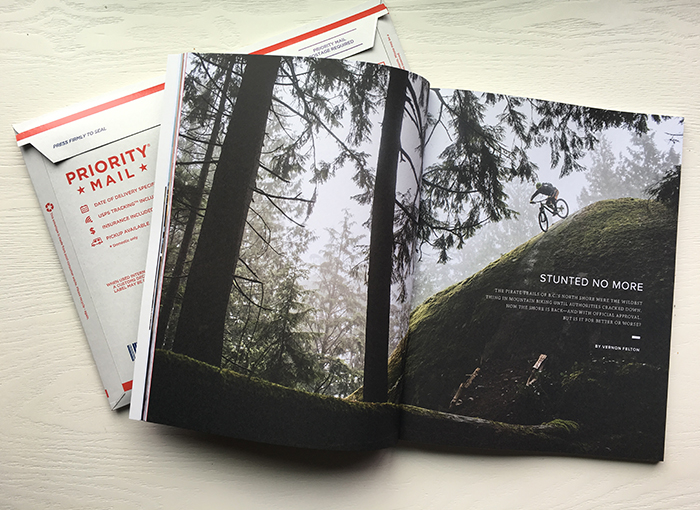 Readers are raving about the inaugural issue of Adventure Journal! Order today and get it via priority mail for arrival within one to three days!

132 pages of stoke, inspiration, deep thoughts, and real adventure. See what the buzz is all about.